"The Tempest" by W.Shakespeare

In Act 5 Scene 1, Prospero uses a soliloquy to inform the audience. “I’ll break my staff” and “I’ll drown my book”. This shows the audience that he wants to redeem himself from all the wrong things he has done and that he wants to change. In the soliloquy he states how very powerful he is and how he has used his power to do evil in the past, but wants to change for the better. Whereas in Act 1 Scene 2, Prospero uses his speech to subdue the other characters.

Don't use plagiarized sources. Get your custom essay on
“ “The Tempest” by W.Shakespeare ”
Get custom paper
NEW! smart matching with writer

He does this frequently with Ariel, “Thou liest, malignant thing”.

This demonstrates to the audience how ruthless he was. Today we may think of Prospero as callous and evil for doing this, but in Elizabethan times when the play was wrote, the audience would have liked this sort of thing and found it quite humorous. Therefore, as times progress, the play has different effects over the audience. In Act 1 Scene 2, Prospero uses imagery to highlight the negative features of others.

For example when he describes Caliban; “got by the devil himself”, “wicked” and “tortoise”. This suggests to the audience that Prospero is harsh and unkind.

It also suggests that Prospero is a bully towards Caliban, who at this time is displayed as defenceless. However, in Act 5 Scene 1, Prospero uses imagery to highlight the positive features of others. Such as when he is describing Gonzalo, “honourable man”, “true preserver” and “loyal sir”. This shows a considerable change to the audience from Prospero. We know this because we see Prospero being compassionate towards others, whereas before he was harsh and unkind. Throughout the play, Prospero’s use of magic differs; especially between Act 1 Scene 2 and Act 5 Scene 1.

In Act 1 Scene 2, he uses his magic to create confusion by causing the tempest. “the tempest that I bade”. This is very early on in the scene and already it shows the audience just how powerful Prospero is. But in Act 5 Scene 1, he uses his magic to restore things to normal. By doing this, he shows the audience that he really does want to be normal once again. Also, in Act 1 Scene 2, the natural order of things is upended. For example Prospero, the rightful Duke of Milan, is not the Duke of Milan and there is this big tempest; “I, the wronged Duke of Milan”.

This shows the audience straight away at the beginning of the play that all is not right and that there must be something wrong. In Act 5 Scene 1, when Prospero is returned to his correct position of Duke of Milan, “my dukedom”, the play starts to come together and it starts to iron out. This shows the audience that the natural balance is returned and it also shows us that the play may be coming to an end. Additionally, in Act 1 Scene 2 Prospero creates the tempest to try and hurt his usurpers, but he always makes sure that they are physically unharmed, “are they safe?”

This is because he wants to only hurt them emotionally. This shows the audience that he is not completely brutal. In Act 5 Scene 1 he stops using his “rough magic” and reconciles because he has achieved his aim; he had hurt them emotionally because they were feeling guilty. This shows the audience that he likes to get his own way but he is not completely ruthless because he will stop as soon as he has reached his goal. Overall, I think that the impressions we get from the way Prospero talks and acts in Act 1 Scene 2 and Act 5 Scene 1 reveal a lot about his character and how Shakespeare wanted to portray his character.

In Act 1 Scene 2, the impressions we get from him are quite negative. He is sown to be a ruthless, manipulative, evil and tyrannical character. But the impressions we get of him from Act 5 Scene 1 are completely the opposite; they are quite positive. He is portrayed as compassionate, caring, merciful and forgiving character that is willing to reconcile with the people that betrayed so awfully. The audience see a huge change in the way his character behaves and acts compared to before.

"The Tempest" by W.Shakespeare. (2020, Jun 02). Retrieved from https://studymoose.com/the-tempest-by-w-shakespeare-essay 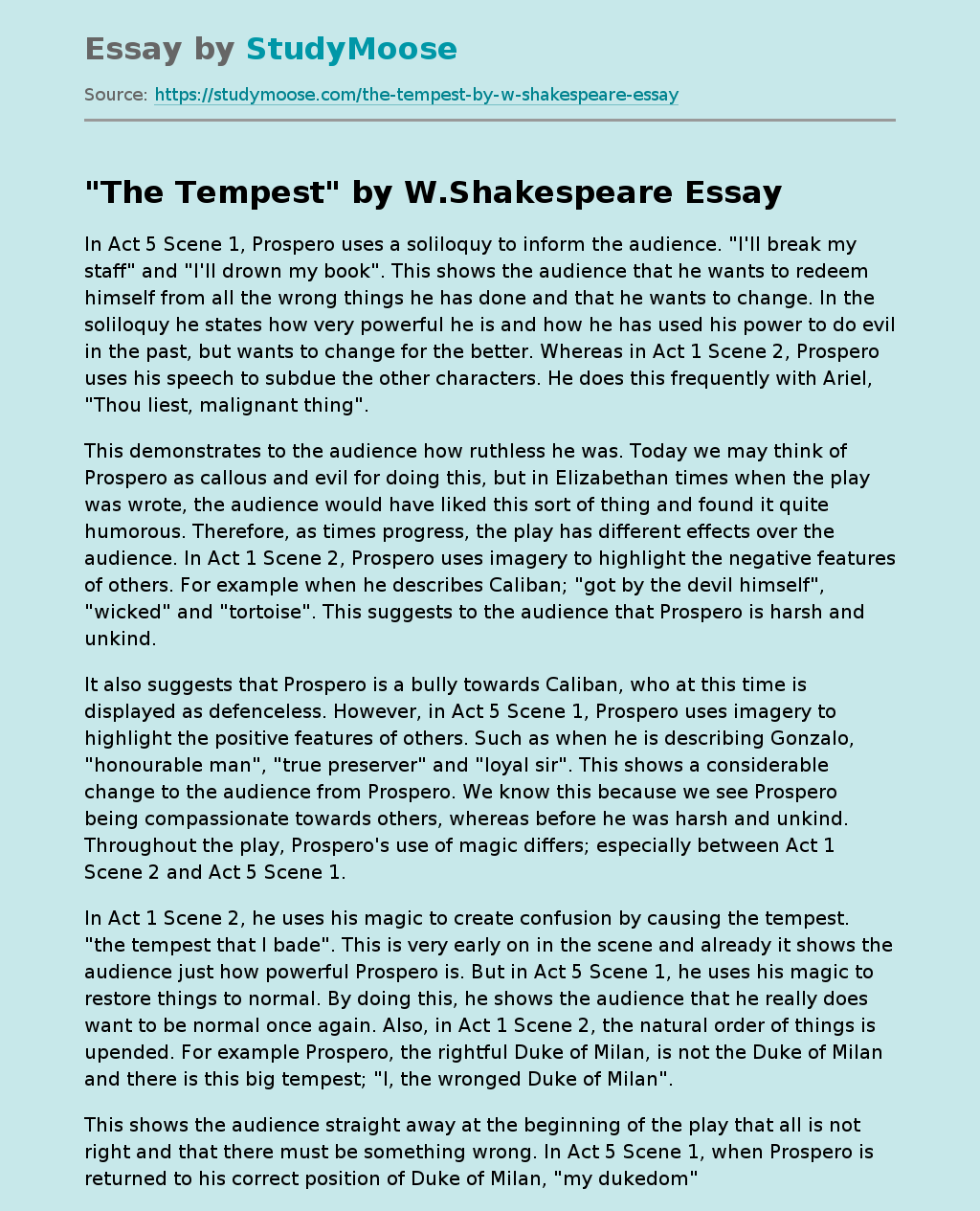