Edgar Allan Poe’s story entitled “The Tell-Tale Heart” is a depiction of anxiety, pride, and revenge that lies within the main character. He did not understand the real reason why the old man used to scream at night. It was just that he is terribly irritated with the loud voice that often came to his ear – his whole body and soul. Poe’s way of revealing oneself is a generation of truth underneath the upheaval circumstances. The way he justified each situation was embossed in different symbolisms and literary images.

Don't use plagiarized sources. Get your custom essay on
“ The Tell-Tale Heart by Edgar Allan Poe ”
Get custom paper
NEW! smart matching with writer

Therefore, Edgar Allan Poe’s “The Tell-Tale Heart” is a story of unfair justice with hidden angst beneath the unresolved signification of truth.

The main character in the story illustrated the situation of the old man. He is alone but he was not afraid with the emptiness and loneliness. However, he was full of hideous sensation that the narrator himself could not understand. He wanted to know the real situation within the old man’s room.

Though he has seen the last scream of the old man, he could not really identify the main reason of the old man’s scream and shout during nighttime.

The old man is blind but his emotion is sensitive. He could hear and feel everything that surrounded him. Even if the narrator has seen what happened to the old man before it died, he is actually clueless of the central reason but despite of it all, he wanted to take his revenge against him.

Because he had lost his freedom every night, he wanted to feel that the man who made his nights terrible will pay all his debts unto him. This part became the main conflict of the story.

Because the themes of the story are betrayal, fear, freedom, and truth, the author revealed all its evidences to support the themes. Betrayal was seen when the narrator justified to his own self that the old man is a “monster” in nature. He betrayed him by killing him. The middle part of the story embodied the theme of freedom – by way of cutting the old man’s body sets him free from the nights of distress and suffering. Truth prevailed at the end of the story when he revealed the old man’s body to the villains.

There are different symbolisms that exist in the whole story. Scream signifies dreadfulness. The author wanted to show the misery of the main character as well as the old man. The metaphorical situation between the old man and the narrator became connected at the end of the story. The pale blue eye signifies deepness – like a sea that seemed to be motionless and quiet but full of mystery and profundity.

In terms of historical and social context, Poe discussed the elements of time and social interaction. The way he presents the importance of time showed that history is a matter of time to identify and to specify. It relates to the situation that happened during the colonial years when slaves killed their slavers for the justification of freedom from suffering and pains. The way Poe portrayed the narrator is indefinable because he did not identify the character as a person but only a doer of the action. It means that the narrator is not a significant person with significant power. He only got the opportunity to act for his freedom.

On the other way around, social context was seen when the villains came to the house of the old man. It was seen that once they have heard dreadful things that happened in a certain place, they will come and think of it as negative situation. There is always a foul play beneath every situation like this. It means that there is already a construction of social morality in dependence to the situation of the ruling-class and not on the side of the slaves. It only shows that Poe’s way of unleashing the slaves’ unlawful power was determined by the circumstances and occurrence that brought them to test.

In conclusion to this, Poe defined the true meaning of slavery and justice in one significant event in the story. It was seen that there is a notion of revenge in every slave due to the fact that there is pain and struggle that are coming through their entire body and soul. However, the author did not used simple words to illustrate the situation and its deeper meaning for he used symbolisms and literary elements and images to unleash the real situation between the slave and the slaver at night – when everyone is quiet and peace. 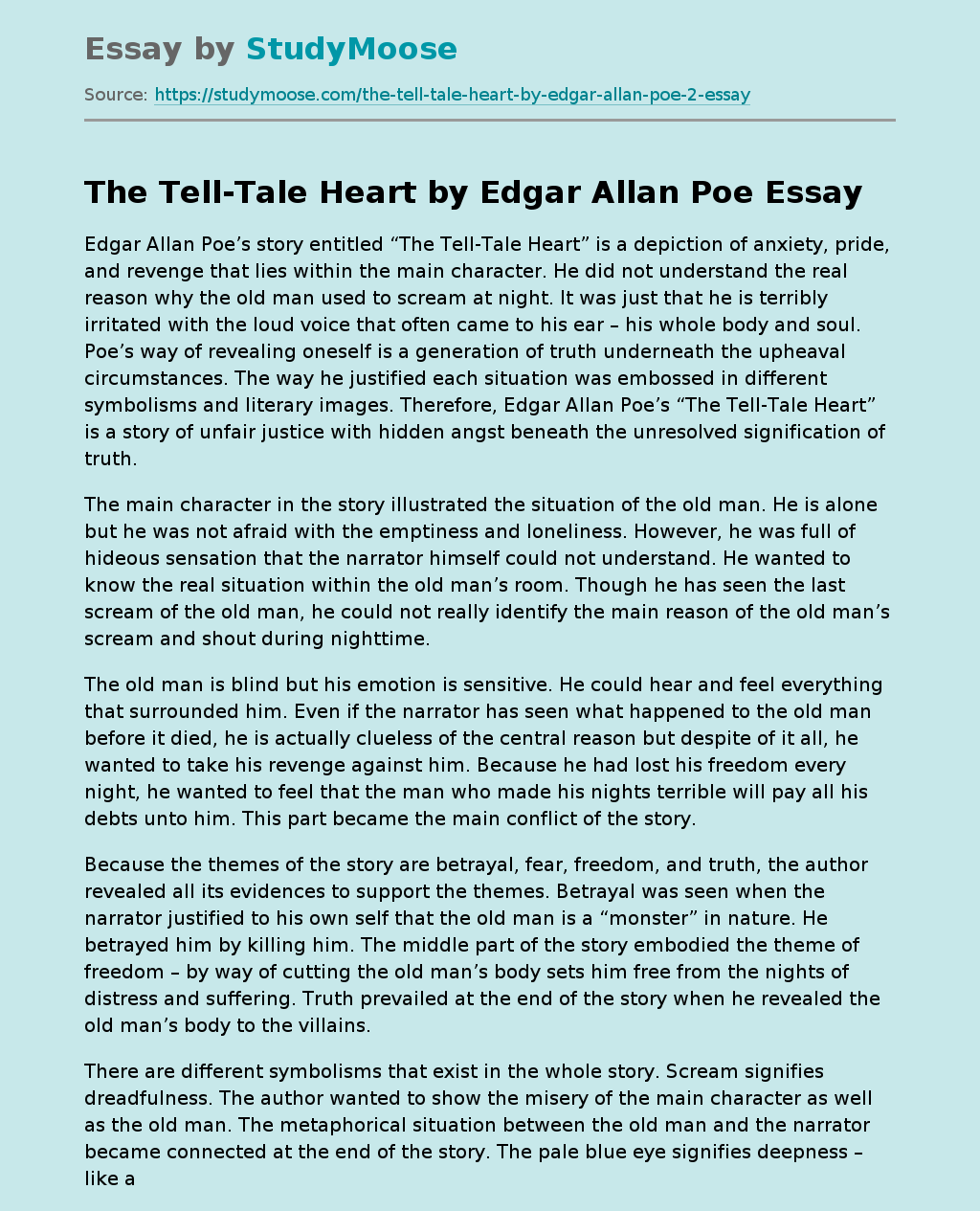