It was April of 1990 when the teacher’s strike began and ended at the end of May of the same year. The teachers’ strike at our Boystown/ Girlstown in Manila where I studied High School was classified as one of the major crises in the life of the Sisters and our Founder, Msgr. Aloysius Schwartz. At first, Fr. Al misjudged the situation and treated it as nothing. But as it turned out, it was deadly serious. It became apparent that the ultimate goal of the teachers was the takeover of our School.

Don't use plagiarized sources. Get your custom essay on
“ The Teacher’s Strike ”
Get custom paper
NEW! smart matching with writer

The goal of the sisters was to remake each of us into the image and likeness of Christ .The leaders of the striking teachers wanted to take over the education program in order to remake us into their own image and likeness which was, to follow and obey only them and not the Sisters. The leaders of the striking teachers were very much friends of the modern world. They objected strongly to the clear, good, but balanced guidelines that the Nuns implying and teaching us about the virtue of charity.

Also, it must be said that some of the striking teachers had the reputation of being gay and the personal lives of some of them was far from good examples. The seed of the strike was sown a year before when Fr. Al decided to fire five trouble-making teachers. Before letting them go, he gave them every opportunity to save their jobs. The sister in charge of education met with them, and also their lawyer too, and he called them one by one and tried to tell them to change their ways.

Their ways were, in general, liberal. They were always complaining, and criticizing the Sisters. There was never a problem regarding wages because their wages were exactly double that of what teachers in government schools were being paid. There was never a question concerning working conditions, because our facilities are first rate. In every way, Fr. Al and the Sisters were extremely generous to our teachers. In return, they demanded hard work, enthusiasm and loyalty.

However, they became unmanageable. Each day was getting worse and they were influencing the other teachers. Even though they knew that they were in the middle of a year’s contract and it was illegal. So Fr. Al decided to terminate them. Later, with their lawyer, they agreed with a financial arrangement that was fair and just. He realized it would be expensive for them, but it was only the way to preserve the institution. After the five left the School, one or two of them continued to have connections on the outside with some of the teachers who remained on our staff. The sisters were not aware of it at the time but one of this group of five was the ring leader behind the teacher’s strike which erupted the following year. The Sister in charge of education asked the other Sisters and the Students about the performance of the teachers so after that she decided not to let ten teachers to renew their contract out of a total of more than a hundred.

These ten teachers called the other teachers to a meeting under the pretense of a birthday party for one of their members. At this meeting, they lied to the other teachers and said that fifty or so teachers were to be terminated. They urged the teachers, in order to save their jobs, to join them in a strike. And so the school would not be able to function. So the strike started. Later, some of the teachers who were misled in to joining the strikers said that they were also physically threatened. If they did not join with the striking teachers, their families or their wives would be subject to violence. At first, Fr. Al had difficulty in accepting this type of report as true. During Holy Week, the strike began at first slowly within the Boystwn complex. So Fr. Al flew to Manila. Several of the Sisters met Him at the airport.

On the way to the Boystown, they told him what had happened. As they approached the institution’s entrance he was shocked by what he saw. Tents were standing on both sides of the entrance where the teachers were sleeping at night. They were marching up and down with signs and placards denouncing the Sisters as tyrannical, and dictatorial. Also, they were physically blockading the entrance and controlling and dictating who could enter and who could leave. One morning, after the Mass as Fr. Al was walking back towards the entrance to the compound, one or two of the striking teachers approached him. One held a microphone to Fr. Al’s mouth and asked him questions.

The girls on the fifth floor in the Girlstown building thought that the strikers had Fr. Al by the throat and beating him. The children became hysterical and came out from the building with broom, dustpan and chair as their weapon heading to the gate, ready to fight against the teachers on strike. The girls grabbed the female teachers and the boys onto the male teachers. The chaos lasted only a few minutes because Fr. Al had told them not to do so and not on that manner. 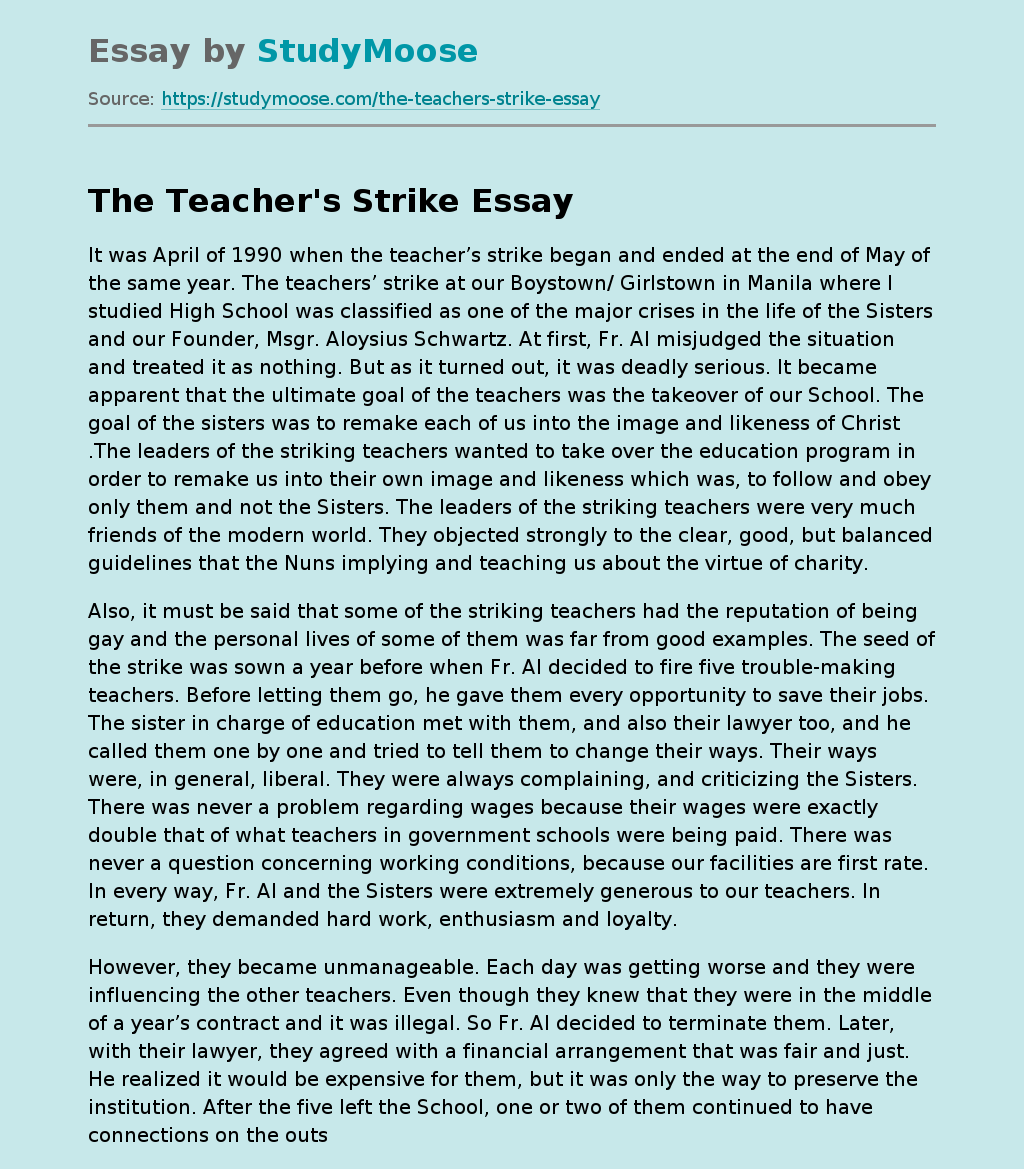