In a ghost story the reader would usually expect to find unbelievable events, encounters between the living and the dead, as well as a strange sense of time and place etc. The two ghost texts that have been studied and used as examples in this essay are, The superstitious mans story and Crossing over. These stories use the conventions of ghost stories although in alternate methods. The ghost stories have diverse techniques and systems for creating suspense, tension and the sense of uncertainty.

Don't use plagiarized sources. Get your custom essay on
“ Ghost Story “The Superstitious Man” ”
Get custom paper
NEW! smart matching with writer

The reason for the different methods of creating suspense may be due to the fact that the stories have been published a ling time before and after each other and during the lengthy period of time in between the two stories the techniques used to create ghost stories have changed inevitably. In addition, another reason as to why the use of conventions in either story is different is because the authors of both ghost stories have various backgrounds, i.

Proficient in: A Ghost Story

The ‘superstitious mans story’ was first published in 1894. This may already explain the tradition writing methods and old styles of creating tension and suspense. Thomas Hardy has set the story in a rural area, which may explain the tradition country superstitions such as midsummer’s eve in his story. Using real life superstitions technique makes the story more believable to the reader.

The technique may also attract the reader’s attention, as by learning about the superstition the reader may be keen to find how it works in the story (suspense).

When ‘The Superstitious Mans Story’ is compared with Catherine Storr’s ‘Crossing Over’ we can blatantly distinguish that the two stories are very different from one another. One reason as to why the stories are different maybe because the two writers have alternate backgrounds. In other words the author of the superstitious man is an author from the late 1980’s therefore his methods of conjuring suspense and tension will be different to those of the author of crossing over has the skills of both an author and a psychiatrist. Crossing over is set in the modern day and uses unsurprisingly uses great twists to both kept the reader interested.

This story is less conventional as it is written by a psychiatrist who uses her skills to build up suspense resulting in a dramatic twist. The reader cannot predict the results of some scenes as obviously the psychiatry skills build up a road, which could lead to many ends therefore making it impossible to predict a future for the root of each suspense packed scene. Again crossing over does not use all the frightening ghastly death scenes even though it is a modern day ghost story, however the story is set through the eyes of ‘the girl’. So the reader is trapped in the thoughts of a character in the story.

Again another illusion in the story is when the reader is led into thinking that ‘Togo’ the dog is the main character in the story as the book evolves around him mainly through the story. These techniques have been influenced by the psychiatry skills the author possesses. Unlike the superstitious man has used a modern day death in its story. As the story develops we find that the accident, which results in, the supposed death of the dog comes from a car incident, which when compared to the death of William in the superstitious man is a lot more bodily and also like many deaths which occur today.

In additional both stories have very reserved characters. For instance William (in the superstitious man) is very silent and retained which is like ‘the girl’ in crossing over who throughout the whole story does not unveil an identity for herself; not even a name. Although the reader has the viewpoint of the girl in crossing over we hardly ever come across a lot of dialogue from her, it is the same with William who is also silent throughout Hardy’s story.

The two stories are basically set up on the same theme and contain many aspects alike, however the techniques used in both stories vary as each author brings out their saga in different ways of suspense, viewpoint, twists etc. To round off the plot in the superstitious man I would say that it begins with Williams wife becoming increasingly curious over the fact that Williams figure had walked past her whilst she was in the midst of ironing which was unusual as he normally always remained in bed once lain within it which he was until now.

William’s wife becomes agitated; as once she has finished all her ironing she did not see William return. This leads to her pinning up a message to remind him to lock the door once he was back in again. However she is shocked when she comes across his sleeping body in bed. This stuns her and the next morning she questions him about the ordeal the previous night. William is astounded with what his wife informs him and assures her he had not left his bed once he had retreated into it. As the tale of the superstitious man progresses Williams wife (Betty) encounters a young girl who goes by the name of Nancy. 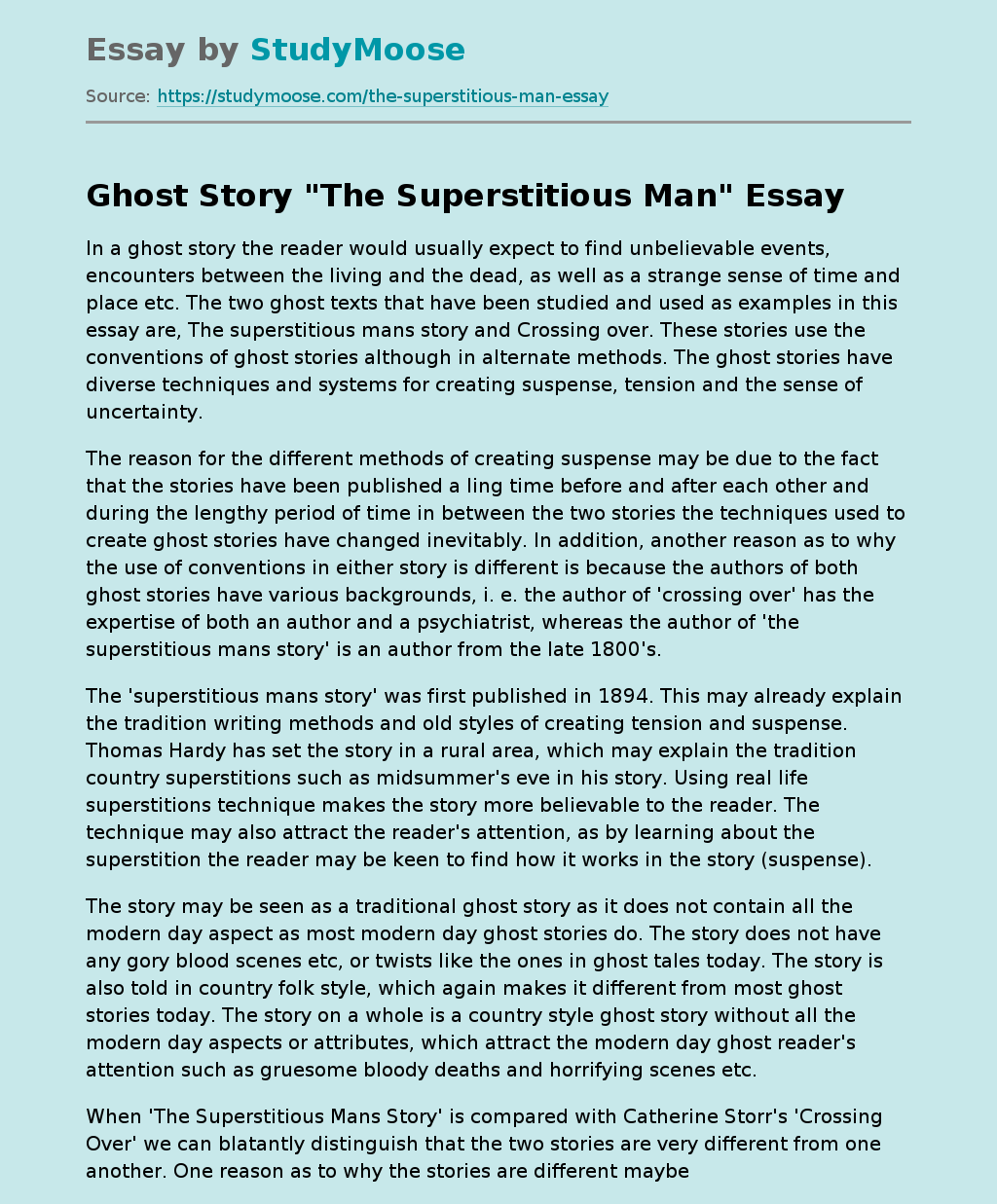