The Suffering of Frankenstein

Frankenstein makes clear of Frankenstein’s innocence before everything becomes tragic. The reader is shown his largely happy and privileged childhood, his blameless obsession with knowledge, and how he arrived at studying what would soon become his downfall. When Frankenstein creates the monster the immediate effect is his disappointment and exhaustion. He is sickened by his own work and regrets the creation from the moment he saw it in the way everyone else will see it. Frankenstein is our tragic figure but the effects of his tragic flaw do not end with his own suffering.

Don't use plagiarized sources.
Get Your Custom Essay on The Suffering of Frankenstein Just from $13,9/Page

A few years after the night when the monster began to breathe, he murders Frankenstein’s brother in Geneva. The feelings evoked by this action are much stronger than Frankenstein’s own suffering—not only due to the increased magnitude of the action but also because William was innocent. Frankenstein had brought his own suffering upon himself, yet William, and the many others who suffer from his death—including Elizabeth who blames herself—have done nothing to deserve such a fate.

The persecution of the innocents does not end with William. Jeanie, Henry, Frankenstein’s father, and Elizabeth all come to pass as well. With each additional death more and more emotion is evoked for the guiltless and less and less sympathy is given for Frankenstein’s own suffering as everyone who he loves is taken from him. This is partly due to the lost opportunities to end the torture and also due to the guiltiness of Frankenstein. He is the indirect reason for all these deaths; he is the cause of all this tragedy.

Frankenstein as a novel would not be nearly as emotion evoking—and thus not nearly as successful of a tragedy—if the suffering had only been Victor’s. Although not completely fair, the guilt is assigned to him along with the monster for the many deaths and sadness. Henry’s dreams of future work, Elizabeth’s dreams of a happy marriage, and William’s childhood were all taken away as a result of Victor’s project. The tragic vision of Frankenstein is far greater as a result of the “divine lightning,” as Northrop Frye calls it, since there are purely innocent victims.

The Suffering of Frankenstein. (2016, Sep 29). Retrieved from https://studymoose.com/the-suffering-of-frankenstein-essay 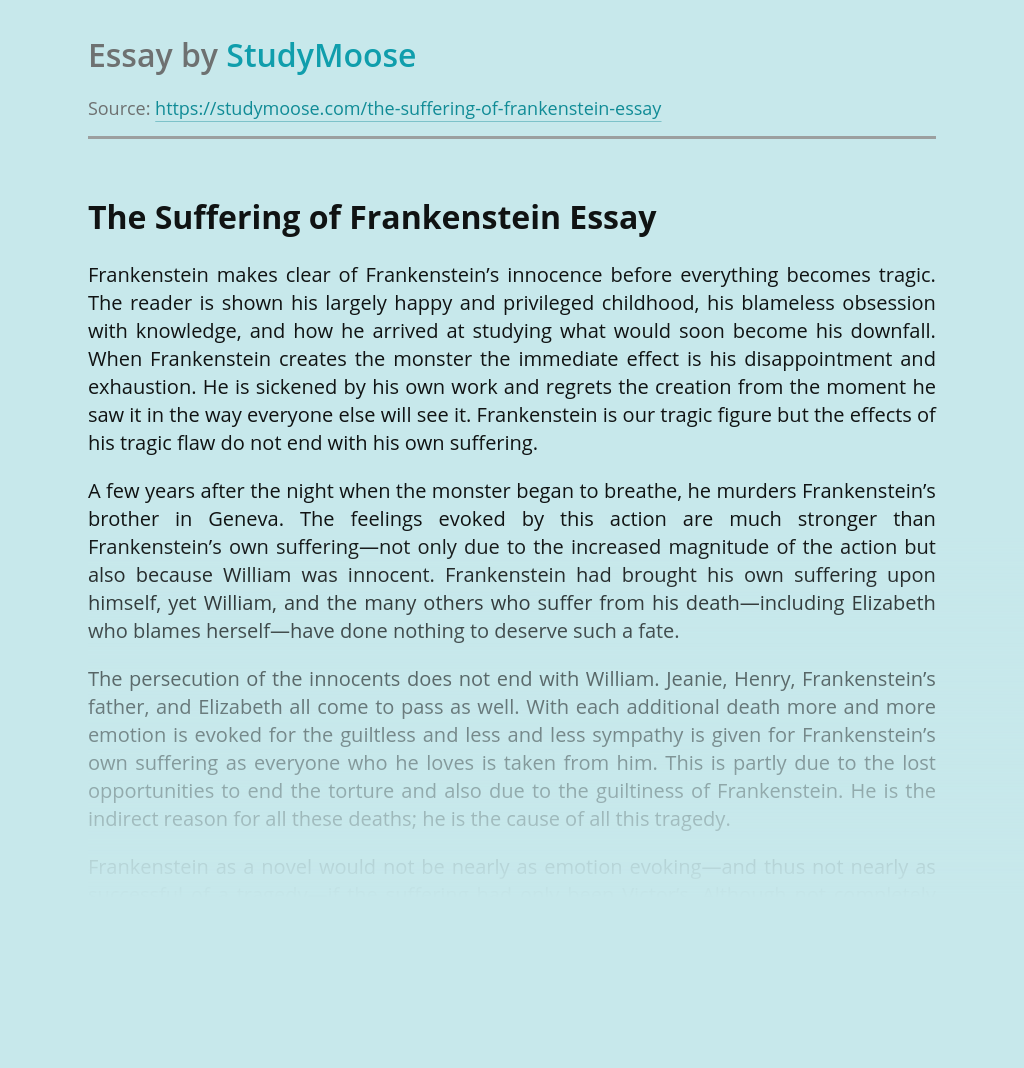 The soul and life of man is a precious thing, something not to be trifled with or experimented on without thinking of the potential ramifications of doing so. Doctor Victor Frankenstein did not put much thought into the consequences of advancing the natural sciences while playing God with mortals. Victor Frankenstein grew, morally, through the...

Although written in the 19th century, Mary Shelley’s Frankenstein has many themes that are still relevant today. Frankenstein, though it was sparked as a simple nightmare, is depicted as a social commentary. The rules of society remain the same, despite the two hundred year difference in time. The norms were being changed over time, yet...

View sample
Get Essay
Similarities and differences between Frankenstein and Macbeth

The stories of “Macbeth” and Frankenstein are two texts depicting the life and tragic flaws of the two main characters, which bring them to an eventual downfall. Despite the different time periods that they were written in, both of the stories contain a dark and supernatural atmosphere that evokes feelings of terror in readers. “Macbeth”...

View sample
The Nature of Humanity in Mary Shelley's Frankenstein

Mary Shelley and Samuel Taylor Coleridge are two recognized writers of the Romantic era. Works by both authors are special in numerous methods. The profound influence of Coleridge’s” The Rime of the Ancyent Marinere” is shown in Shelly’s “Frankenstein” in regards to narrative structure, themes and literary strategies. This essay will compare and contrast the...