The subject matter of phonetics

Phonetics is a science devoted to the physical analysis of the sounds of human speech, including their production, transmission, and perception. Phonetics is traditionally divided into two branches: acoustic, concerned with the structure of the acoustic signal itself, and articulatory, concerned with the way these sounds are produced. Theoretical Phonetics studies speech sounds:

1) from every point of view.

Articulatory point of view – every speech sound is a complex of definite finely coordinated and differentiated movements and positions of the various speech organs.

Don't use plagiarized sources. Get your custom essay on
“ The subject matter of phonetics ”
Get custom paper
NEW! smart matching with writer

Phonological – speech sounds are studied through the phonological oppositions. Auditory – all of speech sounds have infinite number of features. 2) studies mechanisms of vowel and consonant production:

– description – setting down as many as possible features which are present in sounds.

This is another subject of theoretical phonetics – syllable division and different approaches to it. 2. The way phonetics is connected with other branches of linguistics and other sciences Phonetics is an independent branch of linguistics like lexicology, grammar and stylistics.

It studies the sound matter, its aspects and functions. Phonetics is connected with linguistic and non-linguistic sciences: acoustics, physiology, psychology, logic, etc. The connection of phonetics with grammar, lexicology and styl­istics is exercised first of all via orthography, which in its turn is very closely connected with phonetics. Phonetics formulates the rules of pronunciation for separate sounds and sound combinations. The rules of reading are based on the relation of sounds to orthography and present certain difficulties in learning the English language, especially on the initial stage of stud­ying.

It is only if we know that /s/ is pronounced after voiceless consonants, /z/ after voiced and /iz/ after sibilants, that we can pronounce the words books, bags, boxes correctly. The ending -ed is pronounced /id/ following /t/ or /d/, e.g. waited /iweitid/, folded /ifauldid/. Some adjectives have a form with /id/, e.g. crooked /’kru-kid/, naked /ineikid/, ragged /’rsegid/. One of the most important phonetic phenomena—sound interchange—is another manifestation of the connection of pho­netics with grammar. For instance, this connection can be observed in the category of number. Thus, the interchange of It—v/, /a—z/, /Ö—Э/ helps to differentiate singular and plural forms of such nouns as: calf—calves II—v/, leaf—leaves II—v/, house-houses /s—z/. Vowel interchange helps to distinguish the singular and the plural of such words as: basis—bases /’beisis—

The subject matter of phonetics. (2016, Apr 27). Retrieved from https://studymoose.com/the-subject-matter-of-phonetics-essay 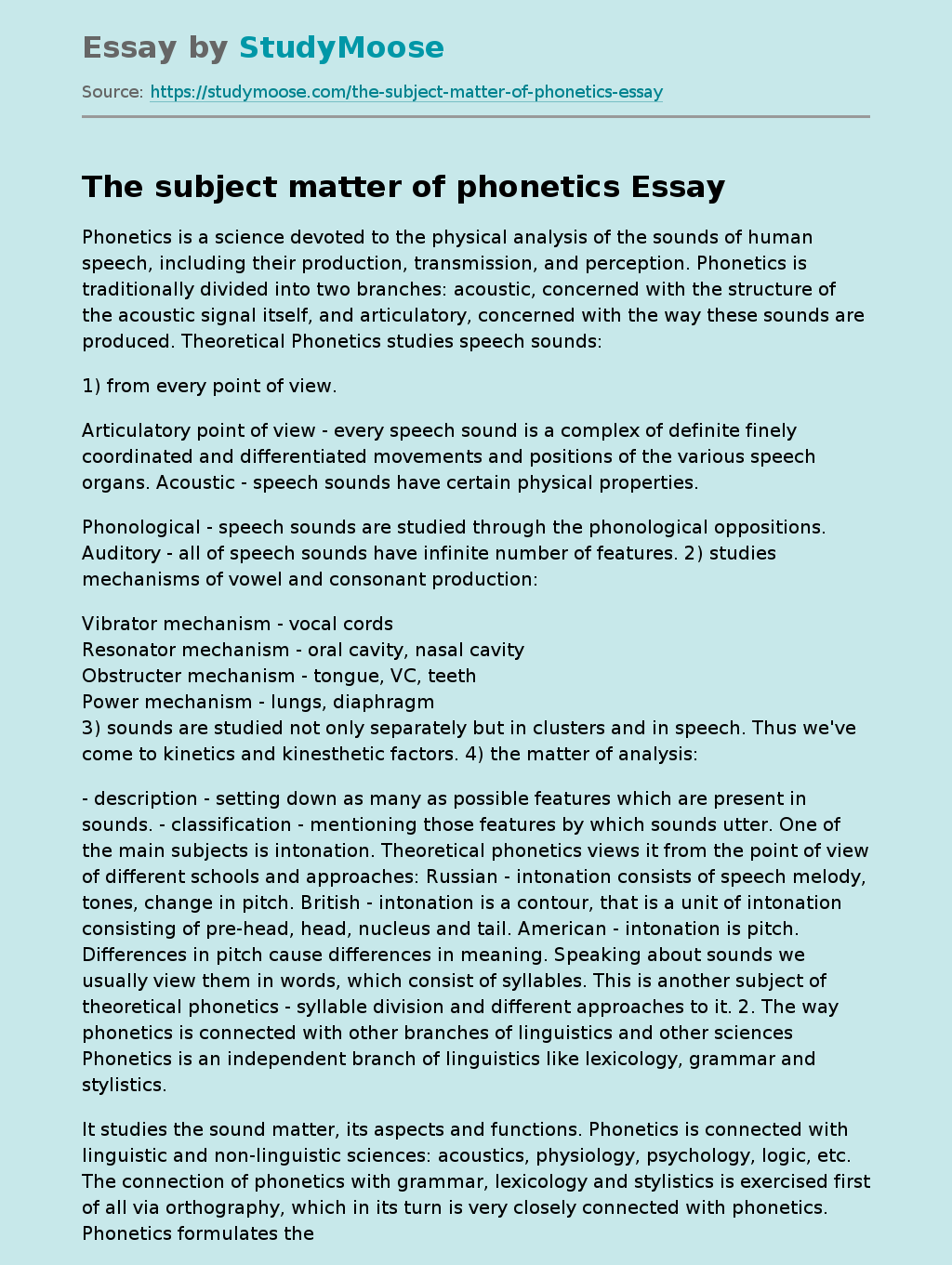