The Study of a Negro Policeman

A review of Nicholas Alex’s book, “The Study of a Negro Policeman”, illustrating the feelings of black policemen.

Black In Blue A Study of the Negro Policeman Nicholas Alex, assistant professor of sociology at The City University of New York, holds a Ph.D. from the New School for Social Research and a B.S. from the Wharton School. He was formerly a research assistant with the Russell Sage Foundation, an instructor at Adelphi University, and has had working experience in his academic specialty-the sociology of professions and occupations-while an industrial engineer in the aircraft industry, later as business manager of the Walden School.

Don't use plagiarized sources. Get your custom essay on
“ The Study of a Negro Policeman ”
Get custom paper
NEW! smart matching with writer

This is his first book. In this book Alex made an effort to examine the peculiar problems of Negro policemen who live in an age which has not yet resolved to problem of inequality in an assertedly democratic society. He drawn heavily on the reflections of forty-one Negro policemen who made plain to me the difficulties involved in being black in blue.

Alex was concerned with the ways in which the men were recruited into the police, the nature of their relations in regard to their immediate clientele, their counterparts, and the rest of society. In the broadest terms, the book examines the special problems that Negro policemen face in their efforts to reconcile their race with their work in the present framework of American values and beliefs. The research for the study was based on intensive interviews collected over a period of eleven months, from December 1964 to October 1965.

During that time the author talked with Negro police engaged in different types of police specialties, and men of different rank and backgrounds. Alex was interested in preserving their anonymity, and substituted code numbers for names. The language in which their thoughts were expressed is unchanged. Most of the interviews were obtained either at the policeman’s home or the authors. Some were held in parks, playgrounds, and luncheonettes. All of the interviews were open-ended. All the policemen refused to have there conversations taped. “I know too well what tapes can do to you,” said one. “I can refute what you write down on that pad, but I can’t if it’s taped. We use tapes too, you know.” The author was dealing with a highly expressive and literate group of men who thought of the study as a way in which they could make themselves heard. This book is organized very well. It consist of eight chapters, and each chapter is broken into subdivisions. The first chapter talks about the policemen in the community. Within this chapter mainly describes the police as and occupation, and states how the policemen’s job is uncertain. The second chapter deals with the recruitment of Negroes for police work. It talks about the need for Negro policemen, and the reasons for entering the police work. The author states in this chapter that most Negro policemen applied for police work only as one possibility among other similar civil service jobs. The next chapter describes the police image and the difference between good cops and bad cops. The author describes a good cop as someone who knows his job, has a well-integrated personality, and someone who tries to understand the particular problems in the community that he works. He describes a bad cop as the guy who puts on a uniform and becomes 10 feet tall. In my community there is a cop that relates to that statement. The only reason he is tough is because he has a badge on his shirt. I would like to meet him in a dark alley when no one else is around, and without him wearing his badge. Then we can see who is the tough guy. The next chapter is a very interesting one. It deals with the Negro policemen and his white counter part. It talks about how the Negro policemen feel they are viewed by white policemen. They feel that the white cops look at them as an oddity. It also talks about how the Negro police men feel about the white cops. The Negro policemen interviewed feel that most whites are narrow minded, bigoted and opinionated , middle class in their thinking. The fifth chapter is about the Negro policemen and the white community. One policemen interview said, “From a personal point of view I don’t feel as comfortable as I would in a Negro neighborhood.” The sixth chapter deals with the Negro community. It talks about the different social classes within the community. It also talks about the Negro policeman and the civil rights movement. The last chapter deals with the police uniform and how it is a symbol of the authority, power, and legal status of the police. It also talks about how it can be considered a target for the department. The most interesting subject targeted in this chapter is how the Negro policeman out of uniform faces all the humiliations of being a Negro, especially when he leaves the ghetto. This book consist of a great deal of information. The author could have presented the data in a different manner. He did not present both sides of the issue. He only took forty-one Negro police officers and based his information on that. The author should at least included a chapter on how white police officers feel about Negro policemen. Also in chapter six he only discusses how the Negro policemen think the white community feels about them. He should have interview residents in the white community and ask how they feel about Negroes patrolling their town. Alex presented findings in and interesting manor. He includes mostly all of the questions he asked, and then paraphrased different answers from different policemen. The audience most likely to read this book is the black community. I believe that this book is written in a one sided manor As I previously wrote the author only interviewed black policemen. He should have at least found out how the whites feel about the Negro policemen. The information in this book is very outdated. I would like to see the author or one of his colleagues write a similar book dealing with today’s society. I believe it would be very interesting.

The Study of a Negro Policeman. (2020, Jun 02). Retrieved from http://studymoose.com/the-study-of-a-negro-policeman-new-essay 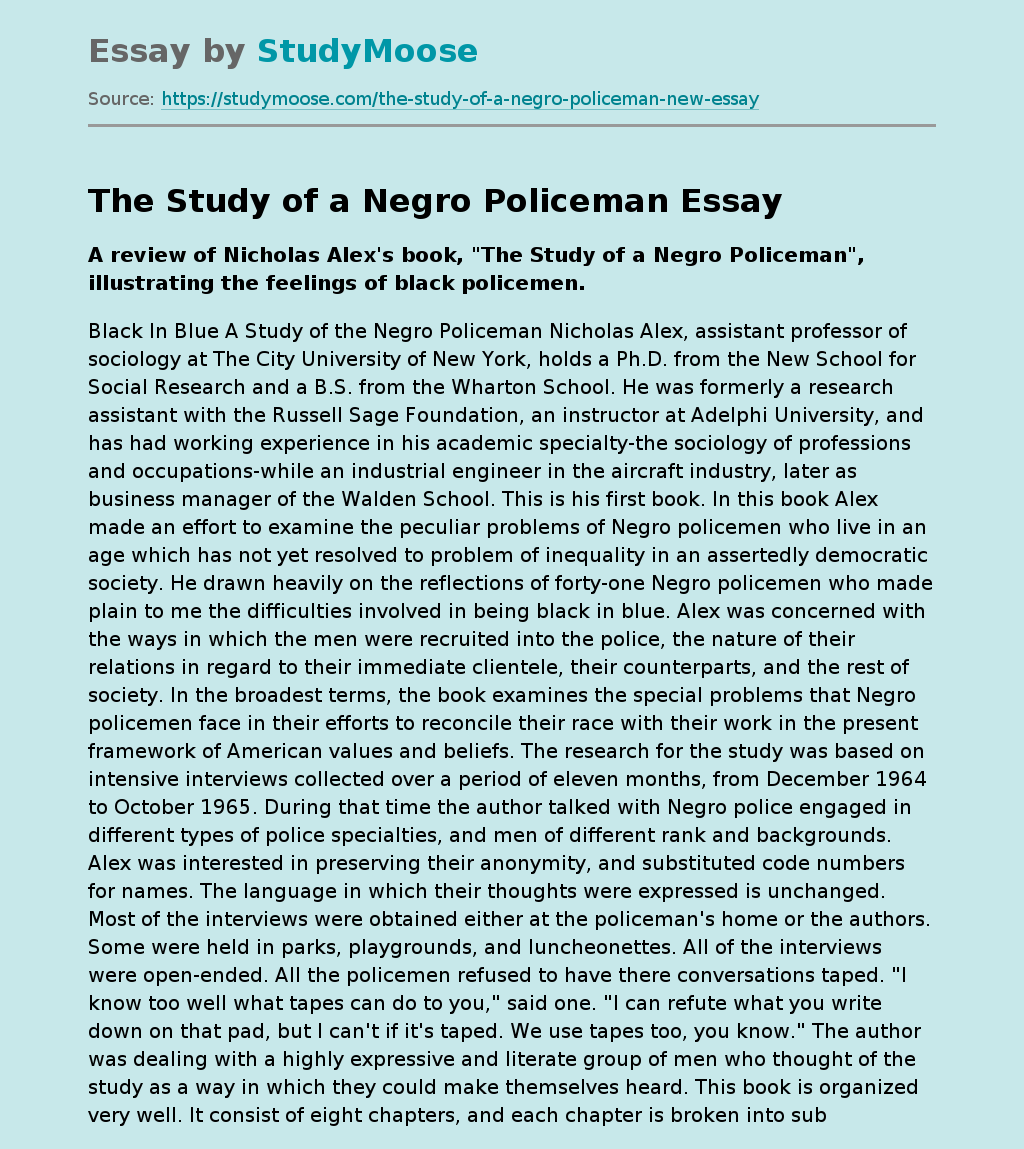