The Stranger or The Outsider by Albert Camus

The Stranger or The Outsider as it is alternatively known is – interesting to say the least. The conflict of the book made you contemplate meaning of life and society. The conflict can be interpreted in a bunch of ways, really, but what is/are the main conflict(s)? After reading the book followed by spending numerous hours in the shower contemplating the meaning of life, I officially came to the conclusion of man versus self as well as man vs society.

Don't use plagiarized sources. Get your custom essay on
“ The Stranger or The Outsider by Albert Camus ”
Get custom paper
NEW! smart matching with writer

However, he does end up overcoming this inner conflict. At the beginning of the book, he is indecisive about most everything.

He doesn’t seem to be acting out of reason. He eventually ends up coming to terms with himself near the end of the story by accepting his fate. However, he never really resolves the conflict he has with society. Even though he no longer really hates himself and has already come to terms with his imminent demise, he still seems to be frustrated with society and vice versa. Society still sees him as some sort of evil, twisted sociopath who doesn’t seem to be capable of showing even the most basic of human emotions.

In my opinion, there’s no way Meursault could have avoided this conflict simply because of his bleak nature (you could argue that this could also signify a man versus fate conflict). It was almost as if from the start he was set to fail. If he had been a different type of person. That is, if he were able to show remorse for his actions. If he actually cared about life, his end probably would have been much kinder to him. His indecisiveness and his lack of empathy were ultimately his downfall.

One of the main ideas (and probably more important ideas) which was commonly present throughout the book was the idea that life is meaningless and full of absurdity. Another huge theme is alienation from the rest of the world, emotionally and mentally speaking. Finally, I believe that a third idea is the way society perceives things like death and emotions. These themes tie into Meursault’s personality and could explain why he initially didn’t want to be present at his late mother’s funeral. Meursault finds most everything society represents such as marriage and mourning to be ultimately useless and unimportant, and he despises the fact that people buy into the custom of mourning. This brings me to the final sentence of the book, which I think is particularly interesting to me. He says at the end that he wishes “there be a large crowd of spectators the day of my execution and that they greet [him] with cries of hate.”

At first, I didn’t really think much of this. But after giving it some thought, he’s pretty much giving life the middle finger by refusing to show remorse for his actions. If he thought everything else in life was meaningless, why would he believe his execution would mean anything either? The only way his execution could have any meaning is if others publicly show their hatred for him. That is exactly what Albert Camus was trying to convey through this book (Camus was a known existential nihilist and it’s obvious Meursault is his way of expressing his philosophical beliefs). The message that existence is futile. Nothing really matters.

Finally, the title of the book The Stranger or The Outsider is quite simple, really. Meursault, in the beginning of the book, feels alienated from the rest of the world, despite not being physically exiled. He still lives among society, but he doesn’t participate. In his mind, he is a spectator. He’s on the outside looking in. He’s a stranger to himself and to other people.

The Stranger or The Outsider by Albert Camus. (2021, Dec 03). Retrieved from https://studymoose.com/the-stranger-or-the-outsider-by-albert-camus-essay 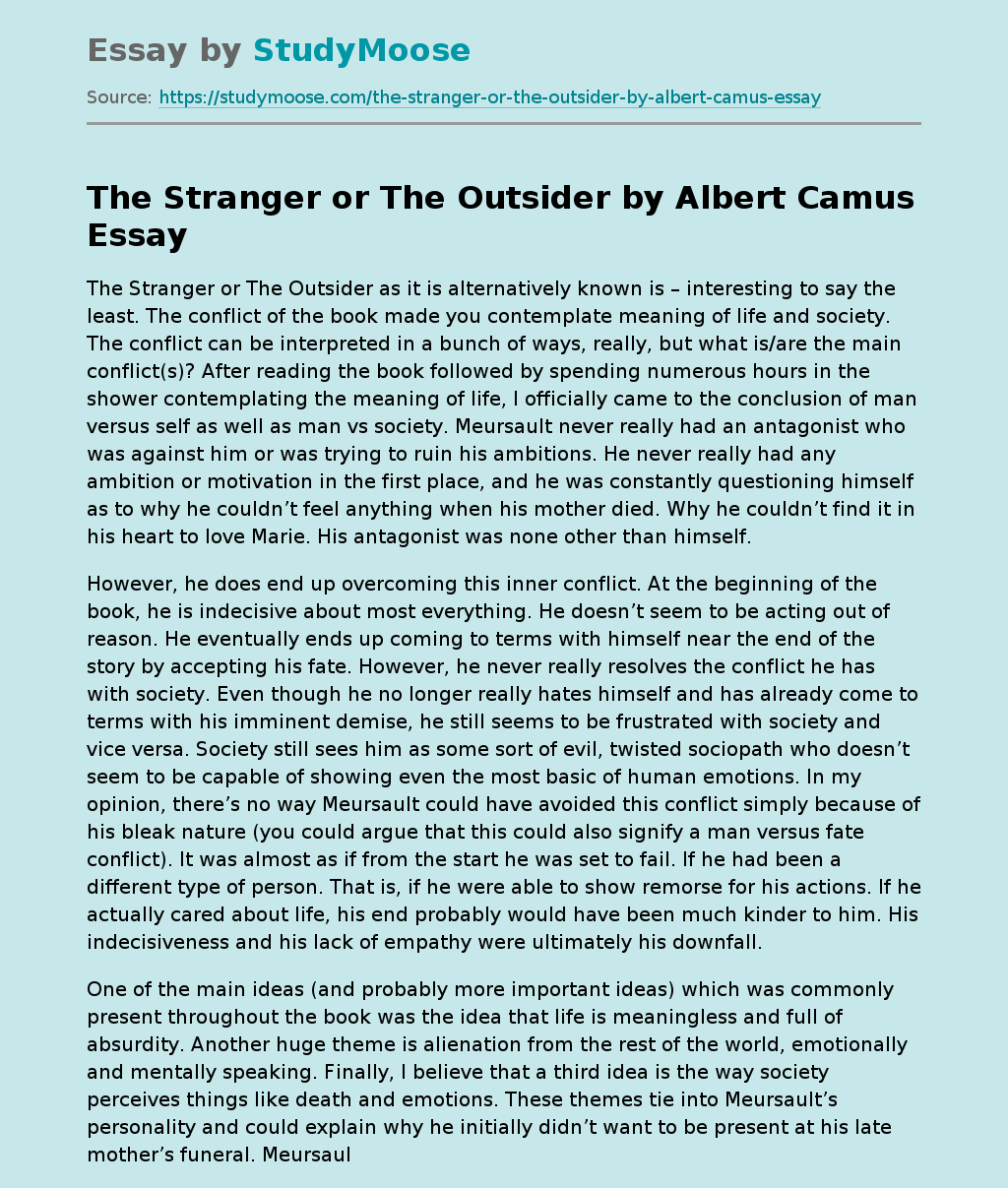