The Strange Case of Dr Jekyll and Mr Hyde: Society and Culture

‘The Strange Case of Dr Jekyll and Mr Hyde is not just the story of a brilliant but flawed man who succumbs to temptation, it is also the story of a man who is a victim of his own society and culture.’

In ‘The strange case of Dr Jekyll and Mr Hyde’ it seems that an upstanding gentleman is pressured by his society and own endeavours into ultimately separating the apparent bodies of good and evil. However the cause of the eventual, tragic demise of Dr Jekyll is rather complex and it is not enough to excuse his actions by placing the blame solely upon the restrictive society of late Victorian London.

Don't use plagiarized sources. Get your custom essay on
“ The Strange Case of Dr Jekyll and Mr Hyde: Society and Culture ”
Get custom paper
NEW! smart matching with writer

There seem to be other significant factors that can explain Jekyll’s actions and depict his character more clearly therefore providing a wider spectrum for determining as to what extent he is a victim or not.

As one is given a description of what life in London was like for a man of such high status a sense of sympathy is developed towards Jekyll’s plight and also upon reading his ‘Full Statement of The Case’ the reader is given a mostly honest insight into Jekyll’s mind; this again, brings forth some sympathy because he explains the pressures of society and the repression of his pleasures which condemn him to ‘a profound duplicity of life’.

Also despite the understandable reasoning behind Jekyll’s actions the reader is confronted with the facts that he brutally murdered Sir Danvers Carew and he had intended to commit such crimes in order to satisfy his ‘pleasures’.

The contrasting feelings tend not to give a clear view of whether or not Jekyll was indeed a victim of his society but the novel does show that he was flawed in his wish for ‘undignified pleasures’. There is a notion that Jekyll is solely to blame for his actions disregarding the circumstances, for it seems that the duality in himself was not normal and quite extreme; therefore he turned towards science and calculated his methods of achieving utmost respectability and satisfying his pleasures which were known to him as ‘undignified’ and at one point ‘monstrous’, but yet he becomes unable to withstand the temptation of what is perceived to be the perfect solution despite its immorality.

The society and culture in late Victorian England is conveyed as one that is wholly unsympathetic to anything shameful that is conducted within anyone’s own private life. For example if a man of such status, like Jekyll, was to be found frequenting brothels and indulging in public drinking a scandal would have certainly been made out of the situation and his reputation would have been ultimately destroyed. The society entirely disregards privacy and so, many upstanding gentlemen satisfy their urges for pleasure very discretely and make certain that no one comes to hear of their ventures.

Then when we come to hear of Dr Jekyll having a very prestigious position in society and dignified reputation it seems as though he is held captive by such fortune. For very many years he has repressed his urges and subdued his taste for pleasure and so this portrays an extremely grave life and one of little joy. Jekyll’s only form of liberation was to have two bodies; one in which to satisfy his pleasures and one in which he could hide from them as the respectable doctor whose reputation would never tarnish. Taking only this into account it does seem as though he is a man imprisoned within his reputation and forced to take this course of action. Society is to blame up to an extent.

Upon realising that Jekyll had carried out the senseless, brutal murder of Sir Danvers Carew in which the victim was trampled and bludgeoned to death until the bones were audibly crushed, it is rational to immediately condemn his actions. Society may have driven him to conceal his pleasures within a separate body but by no means does the social restriction excuse Jekyll’s need for such evil a crime. In ‘Jekyll’s Full Statement of the Case’ he also admits that what were his ‘undignified pleasures’ now turned towards the ‘monstrous’; he was now loosing control of his sense of morality.

The statement ‘Jekyll is a victim of his own society and culture’, I feel, is too strong. There are many reasons for his wish and eventual accomplishment of separating what he believes to be good and evil bodies and therefore one cannot wholly excuse or condemn him. In Dr Jekyll’s ‘full statement of the case’ he seems to explain his actions and motives and feelings but also takes a sorrowful tone as if asking for forgiveness and is quite apologetic. As he describes the pressures within his society and how he has repressed his pleasures a degree of sympathy is aroused within the reader. London, for a respectable gentleman, is portrayed as a strict society in which scandals can be easily procured for very little and as a result reputations are destroyed.

Jekyll’s main flaw is that he consistently treats Hyde and himself as two entirely separate beings whereas, in fact, they are coupled within Henry Jekyll. Despite Jekyll’s honesty in his ‘full statement of the case’ he remains ignorant to the fact that the two bodies of, quite simply, good and evil are actually one and whereas Hyde is ‘pure evil’ Jekyll is both good and evil but he still sees Jekyll as his body of good and Hyde as the embodiment of evil. It is proved, I believe, that Jekyll is both good and evil for he himself states that as he drank the tincture his ‘virtue slumbered’ and if he had approached his discovery in ‘a more noble spirit,’ he would have ‘come forth an angel instead of a fiend’; Jekyll’s own evil produced Hyde.

Henry Jekyll aimed to create a separate body free of social pressure and accomplished this; ironically the thing that was to liberate him led to his own imprisonment and ultimately his death. It is tragic that the society and its pressures led him to his fatal discovery, however many of those pressures were Jekyll’s own need for utmost respectability and subdued wish for ‘undignified pleasures’.

The duality within himself forced the suppression of the evil but when it became unbearable his pleasures verged towards more than just the ‘undignified’ but the ‘monstrous’; for example the brutal murder of Sir Danvers Carew which one cannot help but feel disgusted and contempt for Hyde, who it is revealed, is Jekyll. Jekyll’s subconscious evil intent meant that he procured evil and despite the circumstances I believe that Jekyll was a victim of his own need for two lives both of which were extreme in nature and the society which restricted him was not responsible for the eminently evil that he brought forward.

The Strange Case of Dr Jekyll and Mr Hyde: Society and Culture. (2017, Aug 28). Retrieved from https://studymoose.com/the-strange-case-of-dr-jekyll-and-mr-hyde-society-and-culture-essay 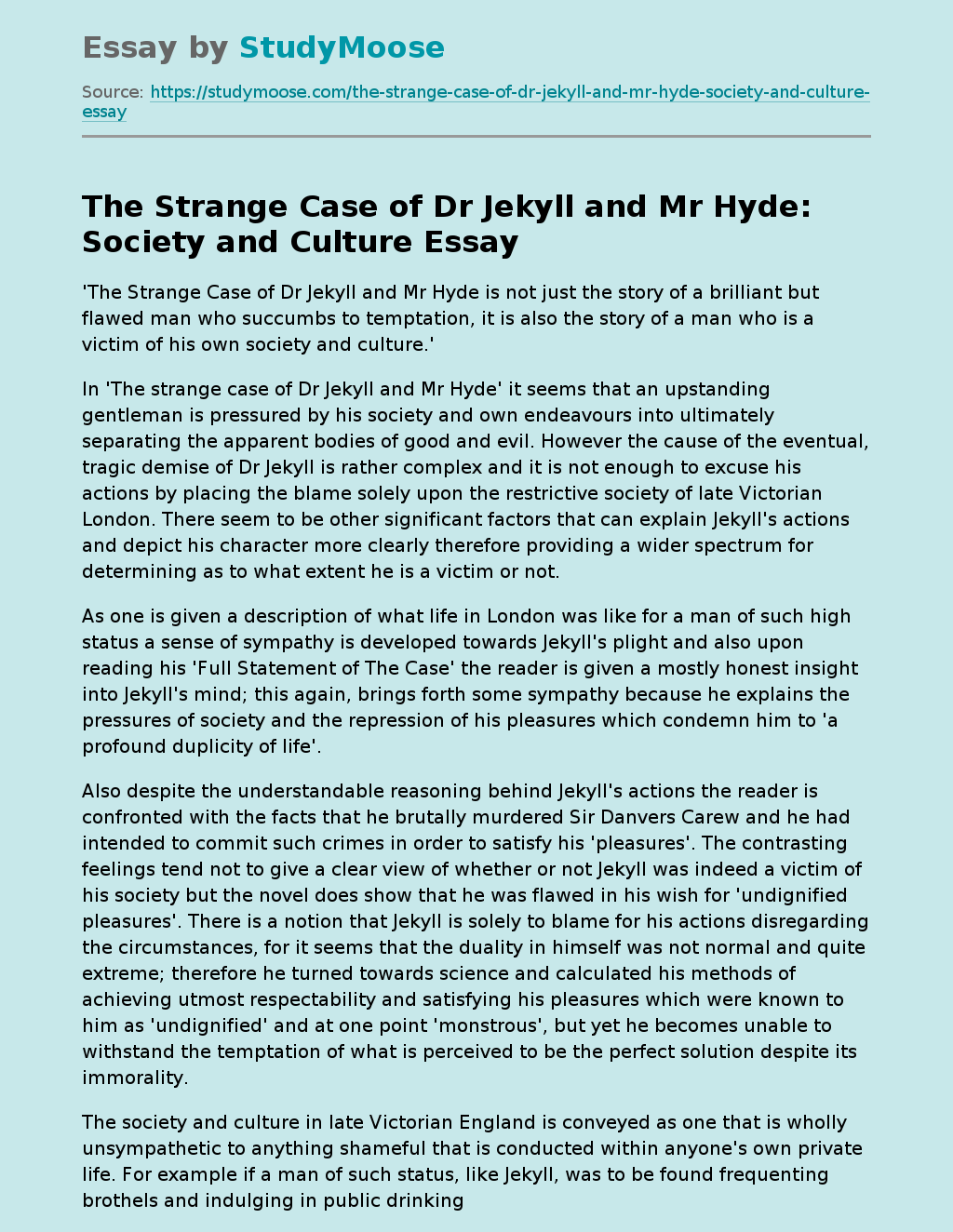