Trust And Loyalty In Friendship

“He began to go wrong, wrong in the mind; and though, of course, I continue to take interest in him for old sake’s sake as they say, I see and I have seen devilish little of the man. Such unscientific balderdash… would have estranged Damon and Pythias” (7) There are no accidents in literature, authors write little details for a reason not for fillers. Damon and Pythias is The Story of trust and loyalty in friendship. What Stevenson is telling us is that what Dr.

Jekyll is doing, by testing the unknown, is so wicked and horrid, that it would break the bond between Damon and Pythias. It is important to the part that even today in our society we refer back to the story of their friendship to help build our relationships and mold them in a way similar to that of theirs. Taking away this would be alien. This part right here, is the exposition of the story that is going to unfold, and whose life’s it is going to impact.

Mr. Utterson and Lanyon care deeply about Jekyll, but they noticing the changes in him.

They serve as the good in society, the God figure, or the higher power. It’s their responsibility to investigate the situation and take matters into their own hands. They have the wisdom to understand the impact he can make to those that are surrounding him. “There lay the cabinet before their eyes in the quiet lamplight, a good fire glowing and chattering on the hearth, the kettle singing its thin strain, a drawer or two open, papers neatly set forth on the business table and nearer the fire the things laid out for tea; the quietest room, you would have said, and, but for the glazed presses full of chemicals, the most common place that night in London” (33) Stevenson was very descriptive of this setting not just to give you an image of what the place looked like, but to show you the many sides within this man.

At this point in the story we don’t really know what is going on, yet we can see the complexity of his character. At the first sight of Dr. Hyde you see evil; someone you don’t want to come in contact with unless needed to. When entering the room you would imagine that when he took over this room that the scenery would be greenish, and musty, similar to that of the books cover. What you find is that this man still has some form of sanity, preparing his tea, keeping himself in order by keeping the room tidy. Stevenson wanted to show the reader that there are still many things hidden within this man, which we still have yet to discover, and it’s not all what we think it is.

“My life was shaken to its roots, sleep has left me; the deadliest terror sits by me at all hours of the day and night; I feel that my days are numbered and that I must die; and yet I shall die Incredulous” (41) His message in this paragraph could be asked in any era, leaving us with the same question, would we be able to handle the truth and accept it? This passage explains to us what Dr. Lanyon knew, and what that shock that killed him. He had learned the truth, but couldn’t put himself to believe what had been confessed to him. Stevenson wanted to show us through the eyes/mind of Dr. Lanyon; how society would react to something similar to this.

We believe the unknown by sight not by word, although we wouldn’t come down to dying, we would be changed people. Dr. Lanyon, couldn’t handle the truth, what he saw was something could not and shouldn’t be done. When adrenaline kicks in we either, take flight or fight, yet he did neither. Society wouldn’t be able to handle the truth as we shouldn’t eat the fruit of knowledge of good and evil. Looking at our government today, if we were told the whole truth, we wouldn’t be able to handle it, we too would be like Lanyon.

“At the sight that met my eyes my blood was changed into something exquisitely thin and icy. Yes, I have gone to bed Henry Jekyll, I had awakened Edward Hyde” (47) Terror has struck Dr. Jekyll, this point in the story could be seen as the climax for his character. He now realizes that the hunger he had to find more meaning in life, to cleanse himself of sin, has turned against him. Eve’s, and Jekyll’s mind (snake) had convinced him into eating the fruit of the knowledge of good and evil. His life without the knowledge was set, yet he decided that h needed to do something more to fulfill it. In Frankenstein the creator dies, while trying to end what he created. They both, Victor and Dr. Jekyll, were experimenting with the unknown, leading to their death. Both shared one common mistake; not being able to take responsibility for their actions, but taken over by their excitement, and not being able to stop what they started. They have lost control.

“The powers of Hyde seemed to have grown with the sickliness of Jekyll. And certainly the hate that now divided was equal on each side” (53) Jekyll and Hyde were once one, and Jekyll saw it as an opportunity to test who he could be. Now they are two different people in one body. Both Fighting to take over completely, and Hyde is winning. The sin and evil that Hyde holds within him, is now seeping through in between the cracks of Jekyll, who is falling apart. This part is extremely significant to the story as he, Jekyll, was looking for the deeper meaning of life and what it holds.

Although Hyde is evil, he is a part Jekyll, deep within him there is that evil that he hates. Hyde could be looked as his conscious, that although it is not completely Jekyll it is his thought and feelings without mercy. Stevenson is telling us that there is a Hyde within all of us, we suppress it because it would not be accepted in society. It is pure evil, and it’s a sin. In a world where everything has to be done to impress society, by having money and being superior in class, Hyde’s are not accepted.

Trust And Loyalty In Friendship. (2016, May 03). Retrieved from http://studymoose.com/the-strange-case-of-dr-jekyll-and-mr-hyde-essay 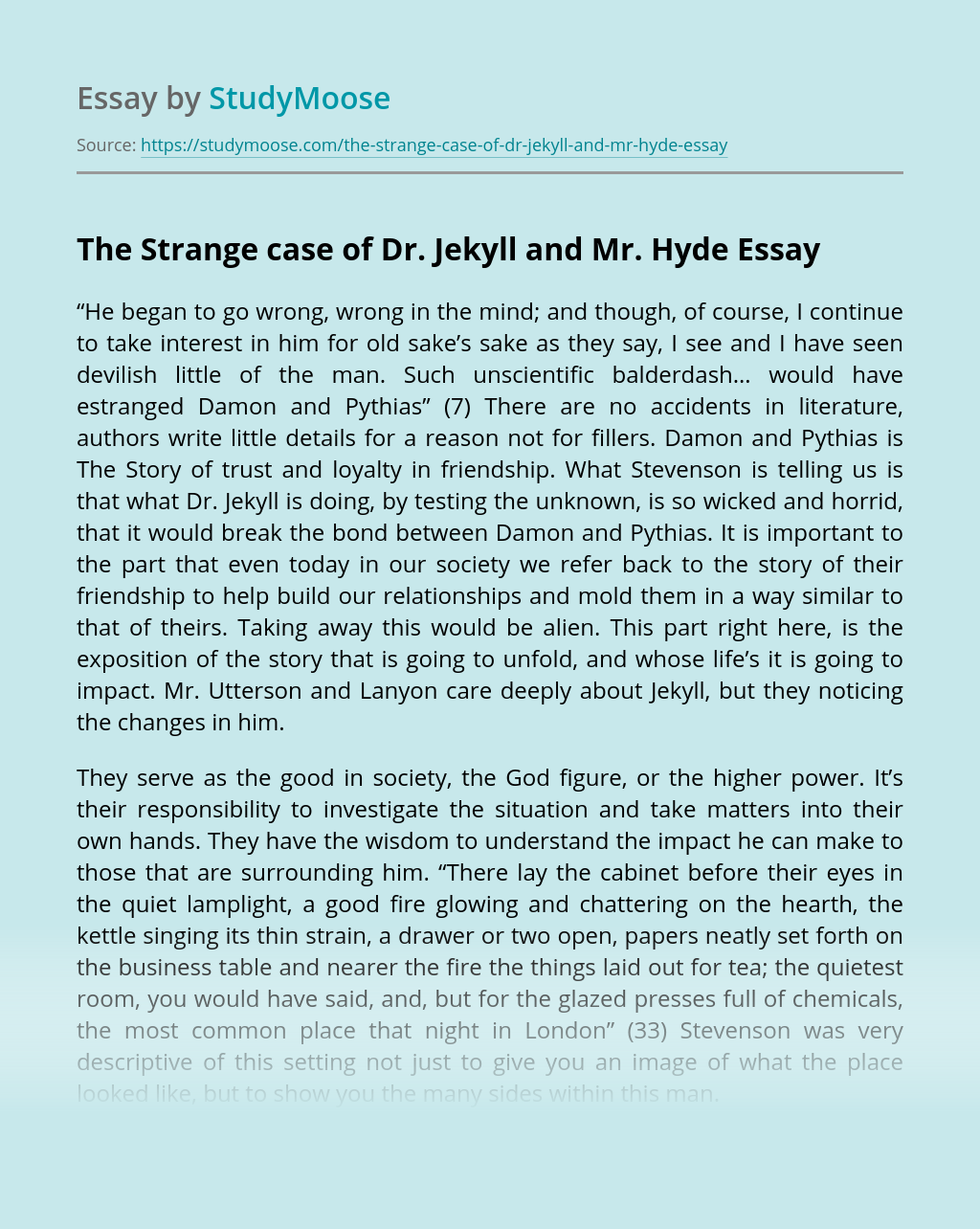 Don’t waste time
Get a verified expert to help you with Trust And Loyalty In Friendship
Hire verified expert
$35.80 for a 2-page paper
Stay Safe, Stay Original