The story “Flowers for Algernon”

Don't use plagiarized sources. Get your custom essay on
“ The story “Flowers for Algernon” ”
Get custom paper
NEW! smart matching with writer

Charlie should not get the surgery because nobody likes him, everyone feel sorry, and he eventually gets sick of being smart.

Charlie should not have had the surgery because nobody likes him when he’s so smart. When he is smart no one can understand him. “Everybody seems frightened of me.” (232) At this time Charlie has had the surgery and he is so smart everyone is afraid of him. If he didn’t have this surgery everyone wouldn’t be frightened by Charlie.

Proficient in: Flowers For Algernon

Because of this surgery Charlie lost his job. “They have driven me out of the factory.” (235) Here Charlie’s workers don’t want him at the factory anymore. Ever since he had the surgery bad things have happened. Nobody wants anything to do with Charlie. “People don’t talk to me or kid around like they used to.” (232) Charlie is now finding out that no one likes him when he’s smart just because they can’t understand him. Without the surgery he would still have friends.

The final reason why he should not have had the surgery, because he eventually sick of being smart. He had a job that he liked and since he had the surgery he doesn’t want to be smart, so he quit his job. “I’ve quit my job at Domangans Plastic Box Company.” (234) This is showing Charlie becoming depressed. Without the operation Charlie would still be living happily and would never have quit his job. Charlie had the surgery because he wanted to become smarter, but now he feels differently. “I don’t want to be smart anymore” (243) When he had the surgery he had overcome his low I.Q., but he eventually became too smart and no one understood him. They thought he was odd, so nobody spoke to him. He became sick of being smart and wanted to not be smart. If he didn’t have the surgery he would have never wanted to not be smart.

The story “Flowers for Algernon”. (2016, Sep 13). Retrieved from http://studymoose.com/the-story-flowers-for-algernon-essay 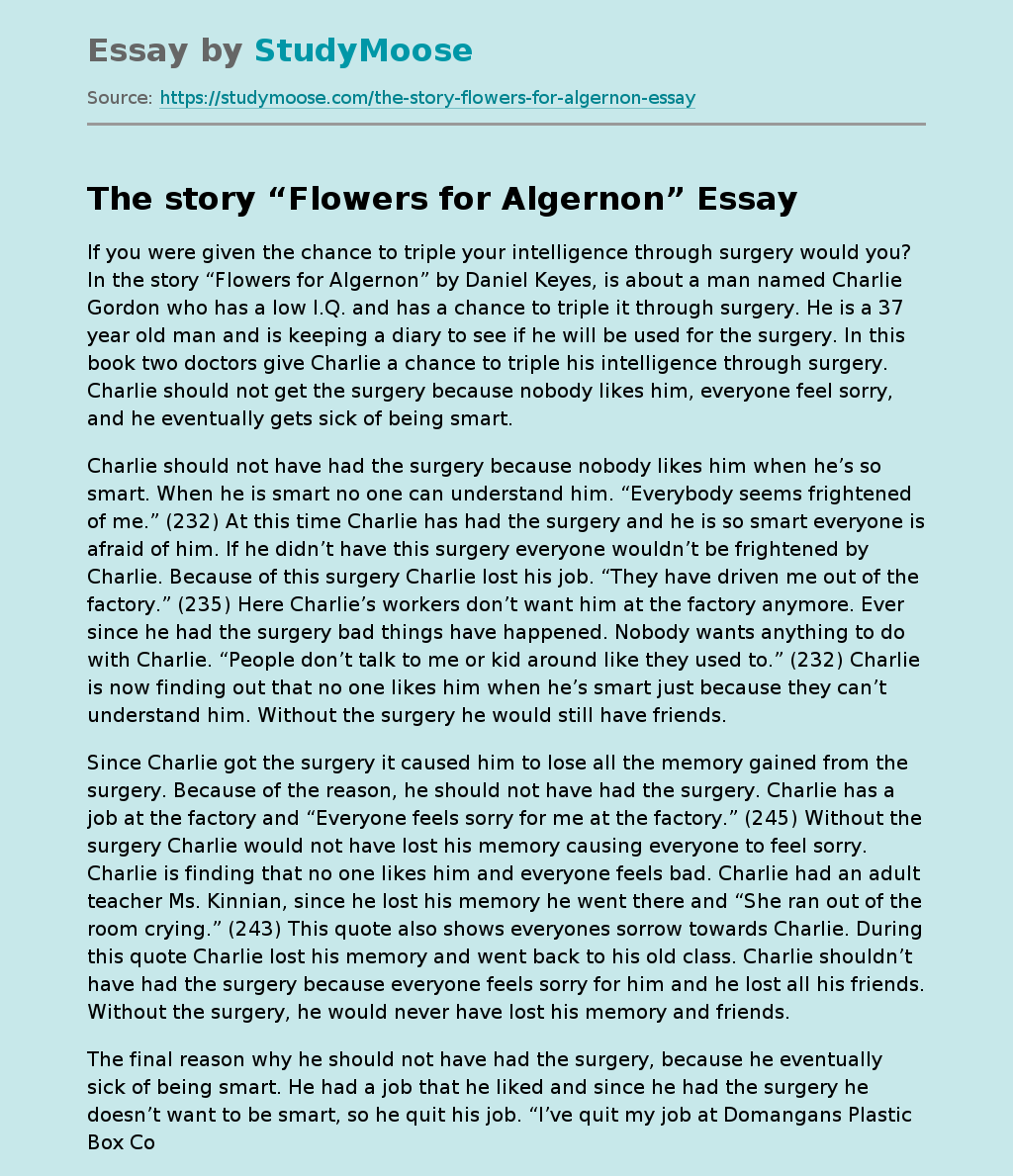