Don't use plagiarized sources. Get your custom essay on
“ The Stigma Surrounding Mental Health for College Students ”
Get custom paper
NEW! smart matching with writer

Targeted interventions as well as student-led organizations tackling the topic of mental wellness have found some success, but this is a broad field that needs to be further examined. The guidelines for this may lie in Tajfel and Turner’s Social Identity Theory, in which behaviors can be linked to social status; and Sidanius and Pratto’s Social Dominance Theory, which involves understanding the intrapersonal, interpersonal, intergroup, and institutional mechanisms that can exist in a society.

Understanding the interactions of people could lead to better designs of interventions or new study designs for the future. Suggestions would be to have an extensively randomized study in order to gauge nationwide mental health literacy as well as the success of specific interventions.

Tajfel and Turner’s social identity theory predicts the behaviors of intergroups. Social identity is the concept a person may have about themselves that makes them feel that they are an important part of a group. The social identity theory predicts behaviors based on the differences in status, the stability of those differences, and the ability to move from one group to another. Tajfel and Turner explain that behavior is driven by both interpersonal and intergroup behavior and that behavior will vary on a continuum between these two behaviors. If interpersonal behavior was the definite predictor, we would be looking only at the characteristics of the individual and relationships between two people. If intergroup behavior was the predictor, we would be examining only the social categories that exist for more than two people. According to Tajfel and Turner, people are always working to have a positive sense of self and will work to maintain a positive social identity. It is also a prediction of the authors that when a groups boundaries seem to be permeable, individuals may try to mobilize between groups. This is described as a disassociation from the group that involves pursuing individual goals. They are not concerned with improving the way that their particular ingroup is seen, but rather are designing goals that improve their personal status. (Tafjel & Turner, 1979).

Sidanius and Pratto developed the social dominance theory (SDT) as a way to integrate the many levels of the analysis of individual personality and attitudes, institutional behavior, and social structure. The basis of the social dominance theory (SDT) is that all societies are structured as systems with social hierarchies that are group based. This can be as small as one person or a small group of people being the dominant group with subordinate groups at the bottom. SDT deals with identifying and understanding the intrapersonal, interpersonal, intergroup, and institutional mechanisms that bring about and maintain hierarchy and how the hierarchy affects those mechanisms (Sidanius & Pratto, 1999).

Review of the Literature

Becoming preoccupied with they way one will be seen by others for needing to utilize mental health services can lead to a perceived discrimination. There can also be physical barriers to college students seeking help for their mental health, such as a lack of resources, or even the symptoms that result from mental illness. Being literate about mental health can help to reduce stigma because it becomes no longer taboo to acknowledge that mental health is important to the success of the college student. Interventions have been attempted in order to target specific groups as well.

Perceived discrimination can be an intangible obstacle to seeking help for mental issues on college campuses. The way that a student feels about the view that others have of their mental state is paramount. Perceptions of discrimination are negatively related to psychological well-being as well as among the longitudinal effect sizes, supporting that perceived discrimination has a causal effect on well-being. (Schmitt et al., 2014). Additionally, a quantitative review conducted found that that perception of discrimination are negatively correlated with psychological well-being (Schmitt et al., 2014). When students feel that they would be treated differently depending upon their mental health status, self-worth self-care can fall by the wayside.

A recent systematic review identified barriers to college students accessing mental health services as being symptomology, fear of disclosure, lack of mental health literacy, and discriminator obstacles due to the way that their accommodations are organized (Hartrey et al., 2017). Students need support to be focused on both personal issues and the resources available to them as well as the mental health literacy of staff. Half of the battle appears to be recognizing when help is necessary.

Studies have shown that people tend to have a higher perceived public stigma than a personal stigma. Pedersen and Paves conducted a cross-sectional survey and found that those with perceived public stigma reported higher anxiety symptoms due to greater perceptions that others would treat the negatively if they sought professional help (Pedersen & Paves, 2014). Another cross-sectional study documented that college students with greater self-stigma were less likely to have attitudes in favor of seeking professional help (Cheng et al., 2018). In addition, a quantitative review supports that the perceptions of discrimination are negatively correlated with psychological well-being as well as among the longitudinal effect sizes, supporting the hypothesis that perceived discrimination has a causal effect on well-being (Schmitt, et al.,2014).

There is a need for higher education leadership, staff, and healthcare providers to target students and reduce the mental illness stigma. It was noted that depression literacy predicted lower levels of stigmatizing attitudes. A study found that university staff that had high literacy also had low perceptions of stigma regarding depression (Gaddis, Ramirez, & Hernandez, 2018). Another cross-sectional study provided results also supporting that university staff had high literacy and low perceptions of stigma regarding depression (Gulliver et. al, 2017).

Intergroup contact occurs when learning about the outgroup, leading to a decrease in prejudice. This contact can also reduce anxiety when interacting with different groups, which can also lead to less negative opinions about other groups. It can also help people develop habits that allow for a perspective that overlooks differences that may exist (O’Connor, 2017). Working closely with someone on a project causes you to get to know them better and you may gain a better understanding for them as a person. This can cause you to empathize with them in situations as well as to find things in common and reach that common ground while working toward your common goal. This makes both sides feel less threatened and can drastically improve relationships between two groups when this theory is applied.

The level of mental health literacy has been found to have a predictive value on stigma. Higher depression literacy predicts lower levels of stigmatizing attitudes (Gulliver et al., 2017). Stigma surrounding mental health can also be seen as a predictor of attitudes toward counseling. When focused on first-generation students, personal stigma significantly predicted self-stigma was supported. The hypothesis that self-stigma would predict attitudes was also supported as well as the hypothesis that attitudes significantly predicted intentions to seek counseling (Garriot, et al., 2017).

There is still work to be done when it comes to determining which practices are most advantageous at combating mental health stigma and improve mental health literacy in higher education. Interventions to promote positive mental health have shorter-lasting effects (Winzer et al., 2018). In reference to higher education students’ mental health issues, interventions are ideal for short-term to medium-term knowledge and can occasionally result in attitudinal improvements. Social contact was cited as being the most effective for adults in short-term outcome studies but is not always effective in long-term follow-up students (Thornicroft, et. al, 2016). Targeted interventions as well as utilizing student-led organizations are currently being looked to as potential tools.

Targeted interventions regarding the relationship between self-stigma and attitudes could be very effective for first-generation college students; improving outcomes, intentions to seek help, and attitudes toward counseling (Garriott et al., 2017). Technology-based interventions are the latest method of targeted interventions because it is believed that they would be most relevant to students at a university. A similar model to the one used in a high school setting may be the answer. Mental health literacy was shown to be effective through an integrated educational resource for high school students let to positive attitudes over time (Milin et al, 2016). However, the problem lies in the need for resources to bring those efforts to fruition. An attempt was made at determining the effectiveness of these technological interventions, but the results were mixed (Farrer et al., 2013). Future studies involving trials of higher quality, and better randomization methods are needed as that was cited as the major limitation of this specific trial.

Increased familiarity with student-led organizations has been found to result in increases in perceived knowledge and decreases in stigma along with helping behaviors (Sontag-Padilla et al., 2018). A sense of community can work in favor of the student to help them gain a sense of social identity, in addition to providing an outlet to discuss mental health with others. These student-led organizations can also increase mental health literacy among students and the staff that oversee the organizations, which would in turn decrease mental health stigma (Cheng et al., 2018; Gaddis, Ramirez, & Hernandez, 2018; Gulliver et al., 2017).

In conclusion, we see that the stigma surrounding mental health is very real for students of higher education. Mental health literacy may be the best way to approach the topic as a whole, but there are interventions that can be used to help students along the way. Mental wellness is an essential need just as much as any other need of a student. Future studies could explore the prevalence of various mental illnesses that exist, whether regional or nationwide so that resources may be allocated to institutions in order to help lessen this stigma. The research on successful interventions or tactics to increase literacy appears to be scarce, although this problem is not new to universities. It is imperative that this topic be studied further to increase student well-being. 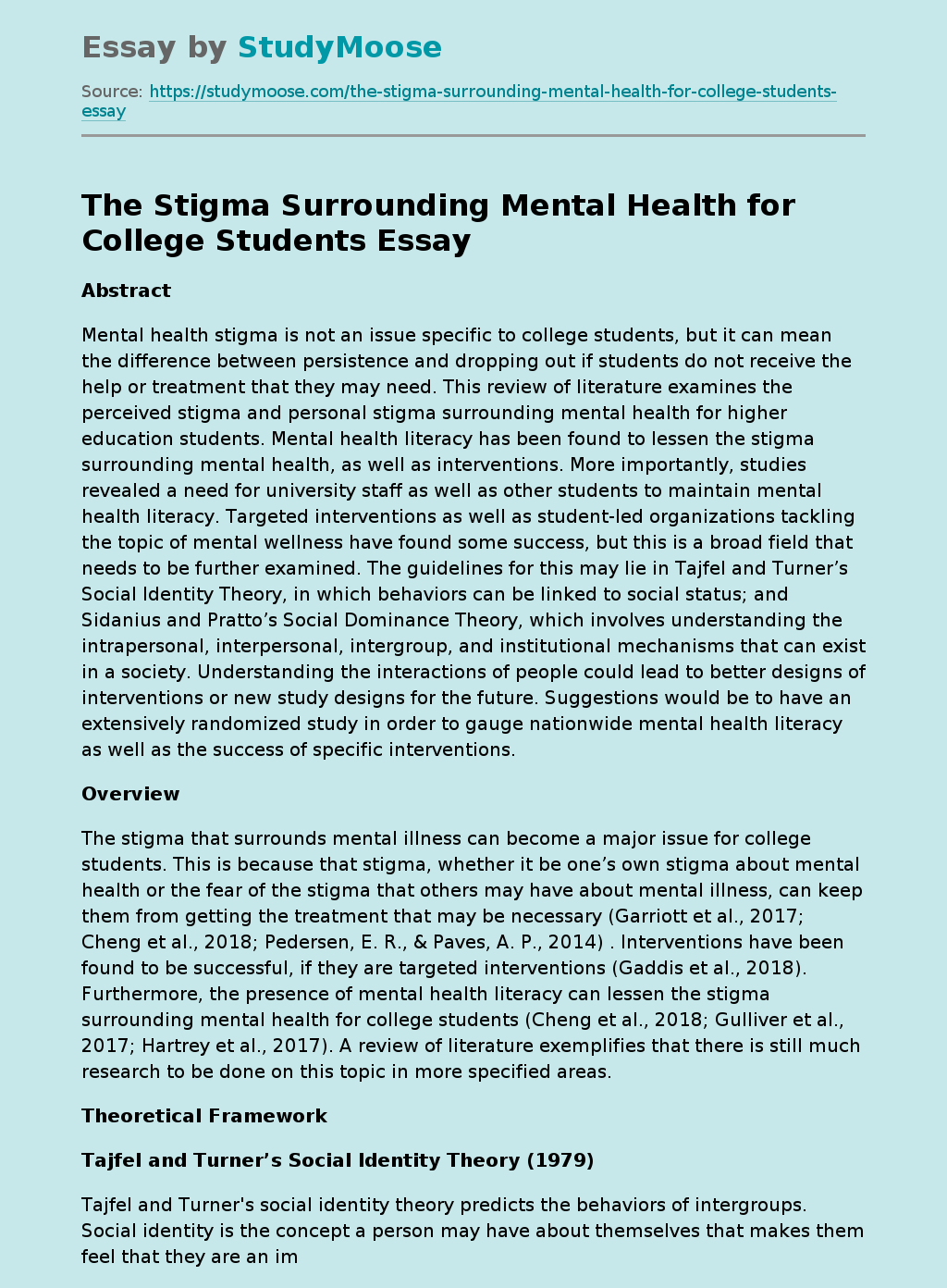