The Stereotype about Tattoo and Piercing

The tattoo and piercing trend has changed drastically over time. There are many different opinions of both tattoos and piercings and the overall effect that they may have on a person. In the past, tattoos were frowned upon and was considered a mark of disgrace. Piercings, with the exception of the earlobes, have shown to have a negative effect on a person’s academic performance, choice of crime, and drug use. Despite the past views on both tattoos and piercings, society has now began to show an increase in both.

Don't use plagiarized sources. Get your custom essay on
“ The Stereotype about Tattoo and Piercing ”
Get custom paper
NEW! smart matching with writer

Society, after an amount of time has also become more accepting of both tattoos and body modifications.

Women generally seem to get tattoos as a form of self-decoration, which consists of flowers, butterflies and other feminine art-work. Women are also known to get tattoos a decorative statement, self-identity or a symbol of their relationship. Most women sought tattoos to be a self-enhancer to their personal beauty. Some women would feel less confident with themselves if they had scars or permanent blemishes on their body, they would be seen to cover them with tattoos. There are also some women that fear getting tattoos because of the pain it may cause them. Women more than men are more concerned about the negative causes in health problems.

Tattoos can take a toll on the human body without proper care. Without the necessary care, tattoo sites may become infected. If left unattended tattoo infections could lead to surgery, removal of body part and costly hospital bills. Tattoos also have a possibility of fading which would require them to have it redone which would put the person at risk again for possible infection and the overall cost of redoing the tattoo. Some people tend to make the mistake of getting a significant other’s name tattooed on their body. For some, those relationships end and they are left with a bitter reminder of their ex. Tattoos also may stretch as you gain weight and get deformed and misshaped.

Men may become pierced for yet another reason of self-identity, such as gothic, their sexuality and their culture. Most generally parents of males do not approve of their sons getting piercings. Some studies show that men that get facial piercings such as nose, ears, and tongue piercings is associated with being gay. Nipple piercings on men are proceeded to be unattractive. Men normally tend to avoid from piercings to protect their masculinity as a man. Most men fear that a piercing would be viewed as if he was gay or non-masculine. Society today seems to think that men with body piercings seem as if they were more deviant and more likely to participate in using recreational drugs. There are some men that get their tongue pierced for others sexual pleasure. Men tend to stay away from piercings to avoid getting made fun of or getting called gay when they are not. (Horne 7)

A form of a woman being so called promiscuous or trying to show their sexual identity as well were getting piercings such as their navel, nipples and nose pierced. Society always thought that when women got piercings they were going over the edge. Women generally get piercings to draw attention to a certain part of their body hence the nose, navel and eyebrow. Some women pierce their genitals for desired sexual attention. More women may begin piercing for more reasons of rebellion. Women more than men are sought to have more visible piercings. All the piercings that women tend to get that are visible have been more focused on the naval and nostril piercing. More women than men have sought to get a piercing within their lifetime as an absolute goal.(Horne 6) Some females feel as if the piercings make them feel more beautiful and give them more confidence, they don’t tend to worry about the disapproval of others if it makes them feel beautiful.

Getting piercings may be dangerous depending on the tattoo and piercing shop you go too. There are some shops that do not dispose of their needles and reuse them which could lead to diseases that no one wants. If you do not properly take care of your piercing you could get an infection which could lead to staph which could easily turn deadly if not taken care of quick enough. Piercings could also prevent people from getting a decent job. People are also commonly found to get tissue damage due to piercings. Tongue piercings can be very dangerous in more ways than one. One way they are dangerous is it could lead to several infections in your tongue which would travel down your body due to swallowing and could begin to infect other parts of the body. Another reason getting a tongue piercing is that you could break your teeth due to biting on the ball of the piercing which could cause major damage to your teeth and cost you a lot to get fixed.(Suns 126)

The Stereotype about Tattoo and Piercing. (2021, Oct 07). Retrieved from https://studymoose.com/the-stereotype-about-tattoo-and-piercing-essay 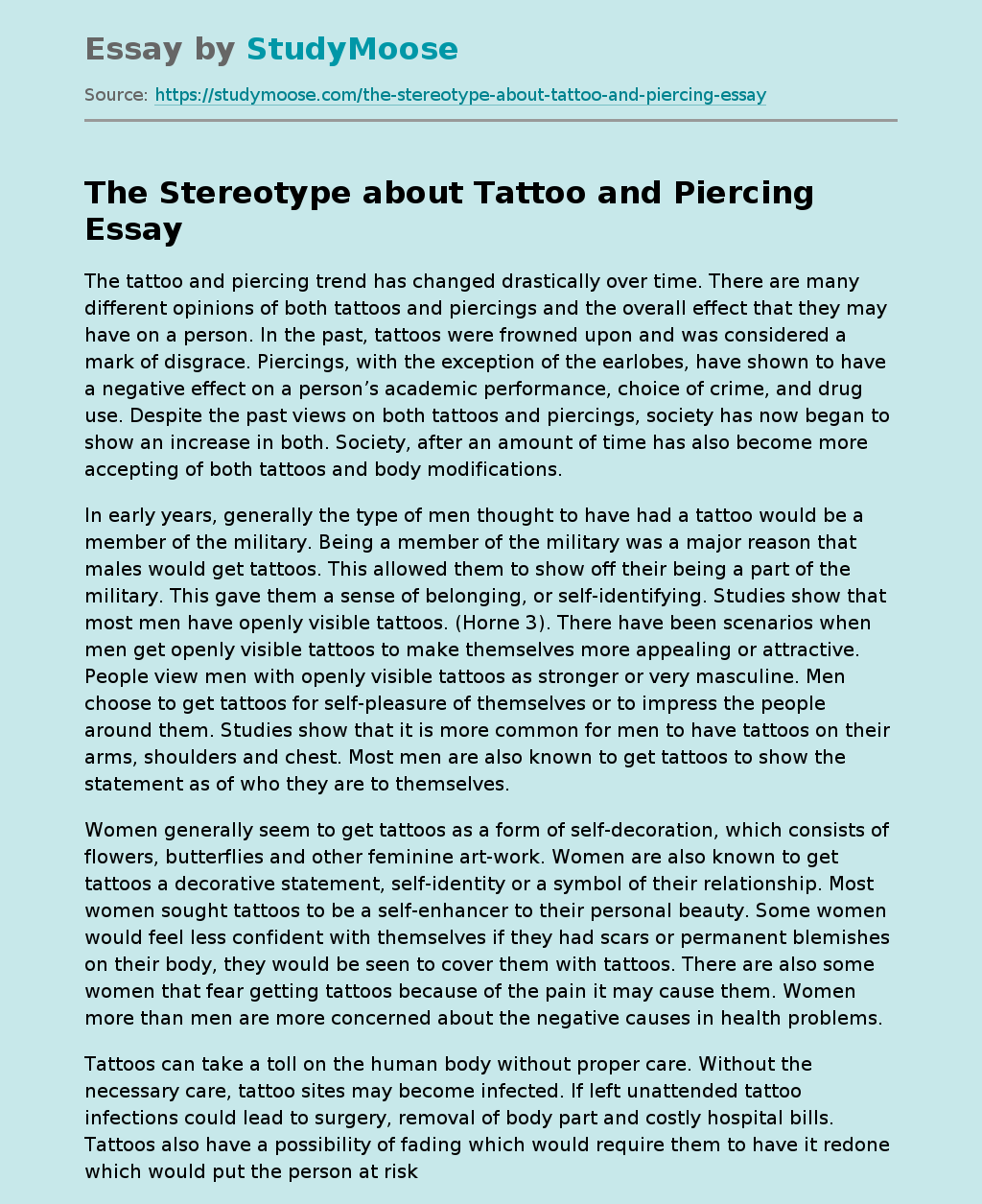