The Statue of Christ the Redeemer

The statue of Christ the Redeemer at the top of the Corcovado Mountain, in the Tijuca National Forest in Brazil, represents the major faith of this South American country. Overlooking the city, it probably has one of the best views that can be found in Rio de Janeiro. The statue is currently 80 years old and has gone under several extensive renovations, which included adding an elevator in 2002. The statue of Christ the Redeemer is probably one of the most recognized images of Brazil.

Don't use plagiarized sources. Get your custom essay on
“ The Statue of Christ the Redeemer ”
Get custom paper
NEW! smart matching with writer

It has a unique design, an interesting history, and a marvelous view. The idea to put a statue at the 2,300 feet height of the top of the Corcovado Mountain can be traced back to the 1850s, but was dismissed when Brazil became a republic in 1889, and a law was put in place separating the church from the state. Christ the Redeemer was designed by a French sculptor by the name of Paul Landowski, and a local engineer named Heitor da Silva Costa was chosen to supervise the entire construction.

The statue was built not out of steel but from reinforced concrete as that was considered a more suitable material for the cross shaped statue. The external caps of the idol were constructed in soapstone due to the resistance of this material to the extreme weather over time and also due to its malleability. It is considered the largest art deco statue in the world and the fifth largest statue of Jesus in the world. It weights approximately 635 tons and 120 feet tall.

The statue can be accessed by the 2.4 meter Corcovado Railway that has the capacity to hold 360 passengers every hour. The trip by rail is approximately 20 minutes and leaves the base each half hour. From the road or the train terminal, the Christ the Redeemer statue is reached in 220 steps. For those not wishing to make the arduous trek up the mountain, reaching the statue is possible by escalators and elevators. The monument is one of the biggest sculptures in the world, and up until today, several reforms have been completed to assure the quality of Christ the Redeemer. The history of bringing over of the construction of the Christ’s Redeemer statue begins in the century XVI, when the Portuguese gave the name of Corcovado Mountain, to one of its more impressive mountains; an allusive name to its form hump.

In 1924, Don Pedro personally drove to the first official expedition of the Corcovado Mountain, this expedition ended with the opening of an accessible raise to the mountain. Then, in 1859, Father Vincentian Pedro Maria Boss came to Rio de Janeiro and was struck by the mysterious beauty of the Corcovado Mountain and suggested the construction of a religious monument in honor of Princess Isabel, who in 1921 gave way to the idea of a great statue of Christ. From 1859 to 1921, Don Pedro gave his consent for the building of the Corcovado Railroad line between Cosme Velho and Paineiras. After fierce competition, the project was chosen by the engineer Heitor da Silva Costa and in September, a national fundraising campaign for the works was organized. All the necessary work material and workers who participated in the construction of the Christ statue were transported by the trains from the railroad, which today functions as a tourist train to the top. The train was the first in Brazil appointed exclusively for the transportation of tourists and the first electric train. The monument was inaugurated on October 12, 1931. In 2002, when the monument was 70 years old, works were being carried out to install elevators and escalators on that site.

The public of Rio de Janeiro thought that Christ with open arms would be the best representation of the city. In Portuguese, this iconic monument is known as Cristo Redentor. Christ the Redeemer is one of the tourist attractions that every year attracts more and more visitors. The view from the top of the statue is the best view of Rio de Janeiro hands down. There is a 360 degree view of the entire city. Not only do you see the three famous beaches, Copacabana, Ipanema, and Leblon, you also see landmarks such as the Jockey Club, the Maracana Stadium, and the Botanical Gardens. The view from the top is not the best thing about the statue although. The ride up and down the Corcovado Mountain is by far the best part of going to see the statue. In 2006, the statue of Christ the Redeemer was proclaimed a national heritage and national shrine, and a year later was included in the list of the new Seven Wonders of the World.

The statue of Christ the Redeemer is a classic symbol of Rio de Janeiro. Already after 80 years the monument still amazes and astounds people with its splendor. Currently, Cariocas, who are born in Rio de Janeiro, could not imagine their city without this famous statue that is already a character of folklore. It is said, for example, that the outstretched arms of Christ not only mean a gesture of blessing, but also reflect the awe of the actions of his creatures. As the statue symbolizes Christianity, it represents Brazil and holds great importance in the Brazilians’ hearts. The statue is the most visited place in Brazil and no one can overlook it for anything else in world, as it has a long history and meaning to its existence.

The Statue of Christ the Redeemer. (2016, Jun 01). Retrieved from https://studymoose.com/the-statue-of-christ-the-redeemer-essay 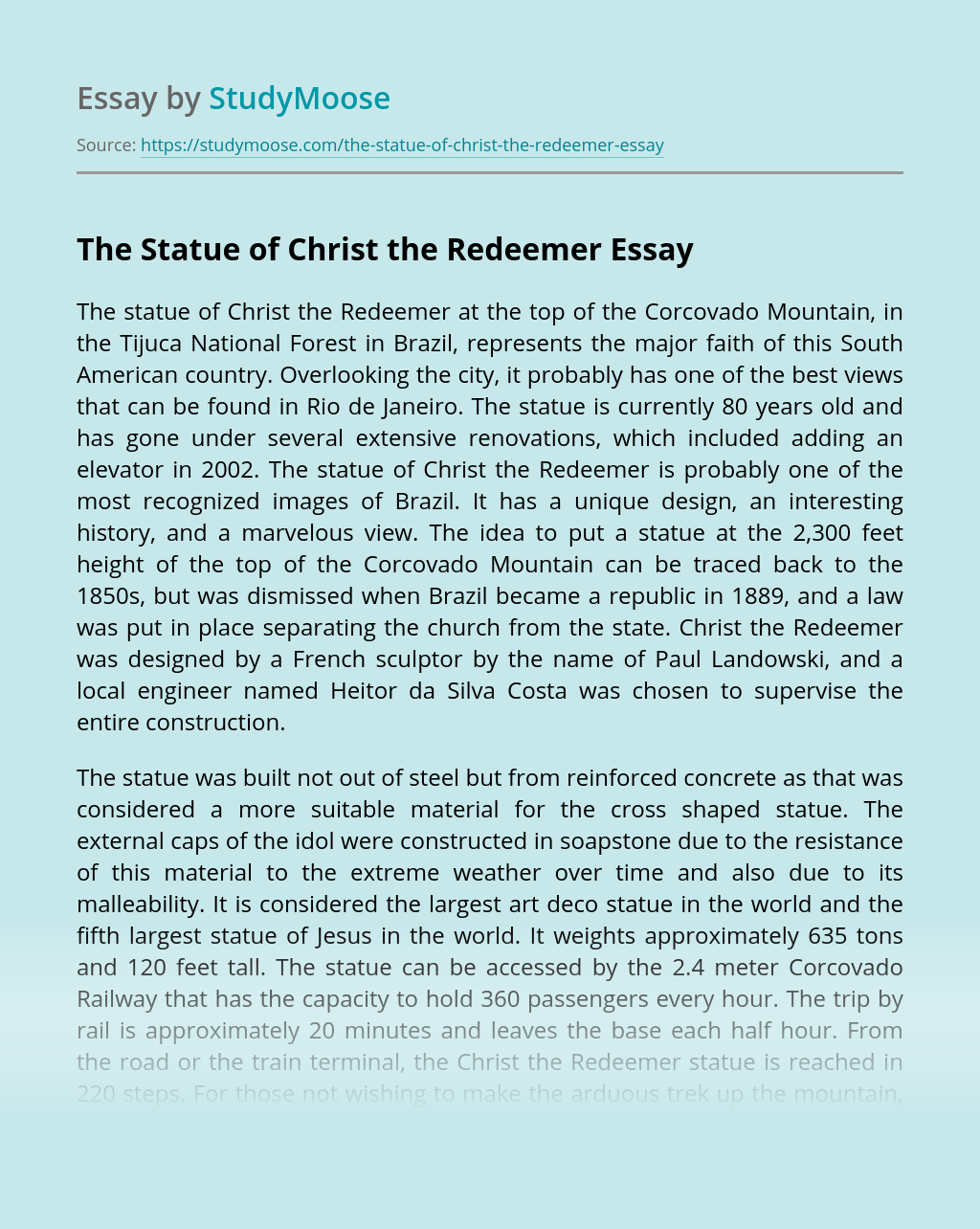