The spread of world religions

1.How did Buddhism, Christianity and Islam spread across the world, and why are they practiced so far away from their origins?

With many differences between all three of these religions, they all had one major thing in common; missionaries. The use of missionaries promoted the rapid spread of Buddhism, Christianity and Islam all across the world. Also these three religions are known as religions in motion. This implies that the religions are constantly evolving. The religions are able to adapt to previous ancient religions and take on ancient practices.

Don't use plagiarized sources. Get your custom essay on
“ The spread of world religions ”
Get custom paper
NEW! smart matching with writer

This makes the religions suitable to be more accepted in various regions of the world. Also many of these religions grabbed the attention of peasants and other lower classes peoples because of what they promised. For example Christianity promised a life of peace and serenity after death if you followed the faith and committed no sins.

Relics, a piece of a saint, or an object associated with someone/something of religious powers, also helped spread of Christianity. There were relics all over world that stimulated pilgrimages to these places which helped spread Christianity. The spread of Islam occurred because of the conquering and expansions of empires, but this didn’t lead to the immediate conversion of people. This was a major factor that helped these religions spread thousands of miles away from their origins.

2.How did these three major religions change and adapt to diverse cultural circumstances?

For Buddhism, they told the local peoples that their gods have converted to Buddhism. They also made it acceptable by incorporating the local gods and beliefs systems to make it easily acceptable among the communities. Translation was also another major factor that stimulated its acceptance throughout the world. The Buddhist practices needed to be translated when it was spread throughout different regions. So as it was translated, the different cultures didn’t translate it as exactly to what it said, but translated it so it fit their culture and ancient practices.

An example of a region that was known to do this was between India and China. Like Buddhism, Christianity adapted and adopted elements from other ancient religions in order to be accepted throughout the world. For example, Christianity adapted sacred places such as were the crucifixion of Jesus took place in Jerusalem. There once stood a shrine of Aphrodite. Christianity also once challenged the emperor ruled making it outlawed throughout the Roman Empire. However, King Constantine I promised to the Christian gods that if there was victory declared on Rome, he would convert to Christianity. This promise was upheld by Constantine I making him the first Roman emperor to convert to Christianity.

This helped the religion to become an imperial sanction. The Bible and other Christian works were also translated into local languages in order for it to be practiced. Also areas such as Ethiopia took on Christianity and combined their architecture into religious sanctions and symbols. People converted to Islam because of merchants who spread the ideas along major trade routes. Sufis (missionaries) used the local language to help promote Islam in many local communities. Also they used local beliefs and practices and incorporated them into Islam just as Buddhist and Christian missionaries had done. They also worked close to the common people which increased the appeal of Islam. The missionaries were not government officials or agents of the church, but rather normal “street” people like everyone else.

The spread of world religions. (2016, May 04). Retrieved from https://studymoose.com/the-spread-of-world-religions-essay 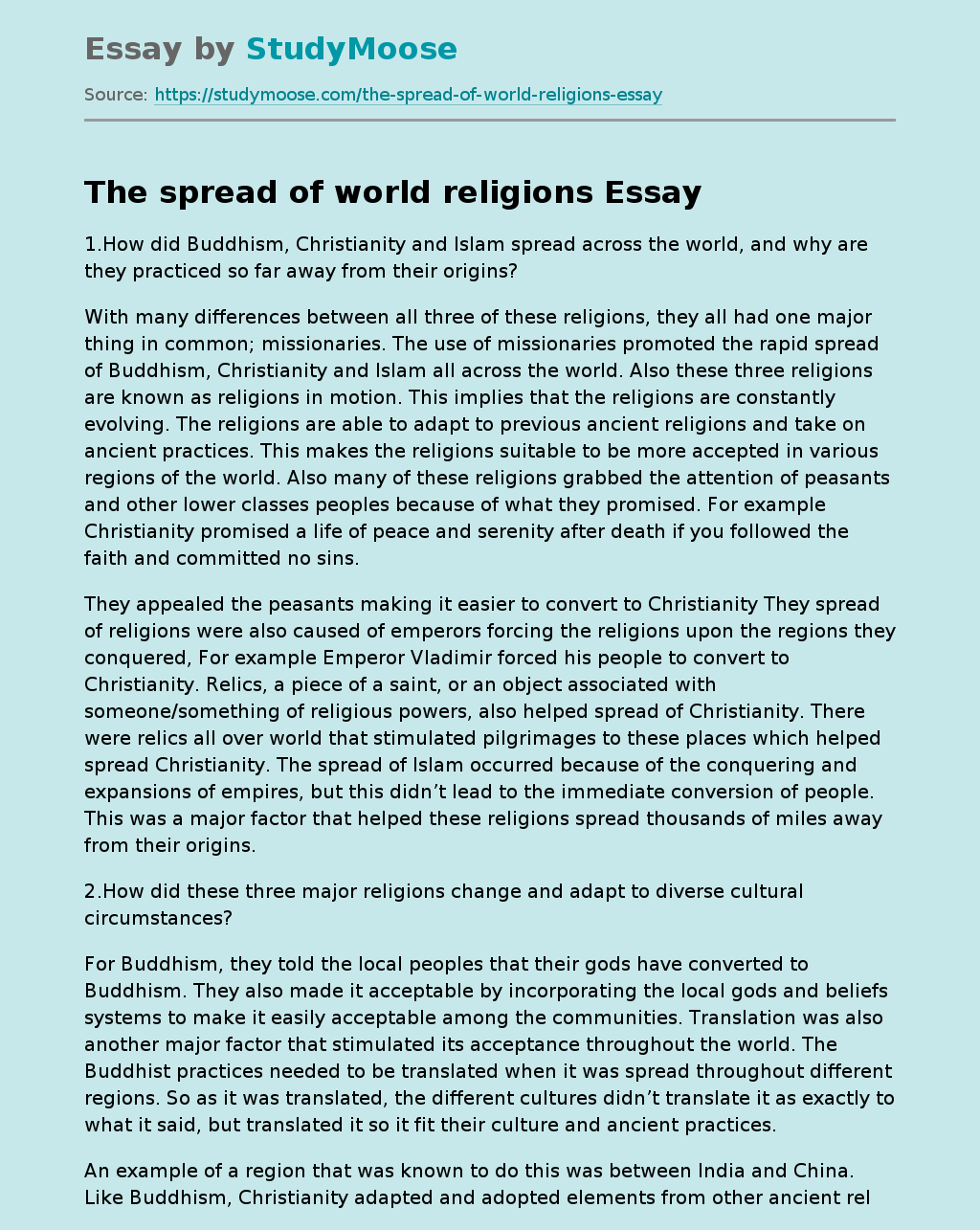