Thesis: In the novel To Kill a Mockingbird by Harper Lee, the various types of outsiders and the small town of Maycomb contribute to the novel’s Southern gothic motif. All throughout the book Lee introduces us to different kinds of outsiders willing to make a change. During the Tom Robinson trial, Link Deas tells Bob Ewell, “…if I hear one more peep outa my girl Helen about not bein’ able to walk this road I’ll have you in jail before sundown” (334).

Don't use plagiarized sources. Get your custom essay on
“ The Southern Gothic Motif of Harper Lee’s To Kill A Mockingbird ”
Get custom paper
NEW! smart matching with writer

By saying this, Mr. Deas is going against the typical Southern way of Maycomb by standing up to a white man in defense of a black woman.

Also Scout says, “Aunt Alexandra was fanatical on the subject of my attire. I could not possibly hope to be a lady if I wore breeches” (108). Scout shows her diversity by refusing to wear dresses like all the other young, Southern ladies. Another example is how Mr. Dolphus Raymond was said to be a “…sinful man who had mixed children and didn’t care who knew it” (268).

The town of Maycomb thinks that the way Mr. Raymond lives is against the way of society but he pays no mind and lives a happy life. Mayomb’s people are quite judgmental, but there are several inhabitants there that are 5not afraid to be outsiders.

Maycomb is portrayed as a typical, small, Southern town where everyone knew each other and everyone had their place. “Maycomb was an old old town, but it was a tired old town when I knew it.

The courthouse sagged in the square. Somehow, it was hotter then…” (1). Scout describes her hometown as being very dull, hot, and boring the way she remembers it, which exemplifies some of the small town and southern characteristics of Maycomb.

At school one day, Scout’s thoughts are that “Miss Caroline seemed unaware that the ragged denim-shirted and flour-sacked first grade, most of whom had chopped cotton and fed hogs, were immune to imaginative literature” (22). Miss Caroline is from another county so she is not accustomed to Maycomb’s small town ways as Scout here describes. At another point during the book, Scout explains that “There was indeed a caste system in Maycomb…” (175).We learn throughout the book that inhabitants of Maycomb County classify everyone into their own groups, usually by the amount of money they have or by their race because that’s just the way their Southern town is. Lee illustrates how Maycomb is a
small, Southern town through caste systems and exclusion of outsiders. Appearance Vs. Reality

In the novel, To Kill a Mockingbird, Harper Lee uses the theme of appearance vs. reality to illustrate that people aren’t always the same on the inside as they are on the outside. For example. Mr. Dolphus Raymond admits to Scout, “Secretly, Miss Finch, I’m not much of a drinker, but you see they could never, never understand that I live like I do because that’s the way I want to live” (268). Even though the town may think Mr. Raymond is married to a black woman because he’s a drunk, he’s actually genuinely happy and chose his lifestyle himself.

One time Scout said, “It occurred to me that in their own way, Tom Robinson’s manners were as good as Atticus’s…” (260). People in Maycomb believed Tom Robinson was just a nigger that raped a white girl, but if they looked deeper they would see that he’s just as courteous as the town-known lawyer, Atticus Finch. Another great example of appearance vs. reality is when Scout states, “Neighborhood opinion was unanimous that Mrs. Dubose was the meanest old woman who ever lived” (46). Everyone though Mrs. Dubose was hateful because she chose to be, but in actuality she was battling her drug addiction. People’s appearances don’t always show exactly who they are, you have to search deeper to understand a person’s true personality.

The Southern Gothic Motif of Harper Lee’s To Kill A Mockingbird. (2016, May 03). Retrieved from https://studymoose.com/the-southern-gothic-motif-of-harper-lees-to-kill-a-mockingbird-essay 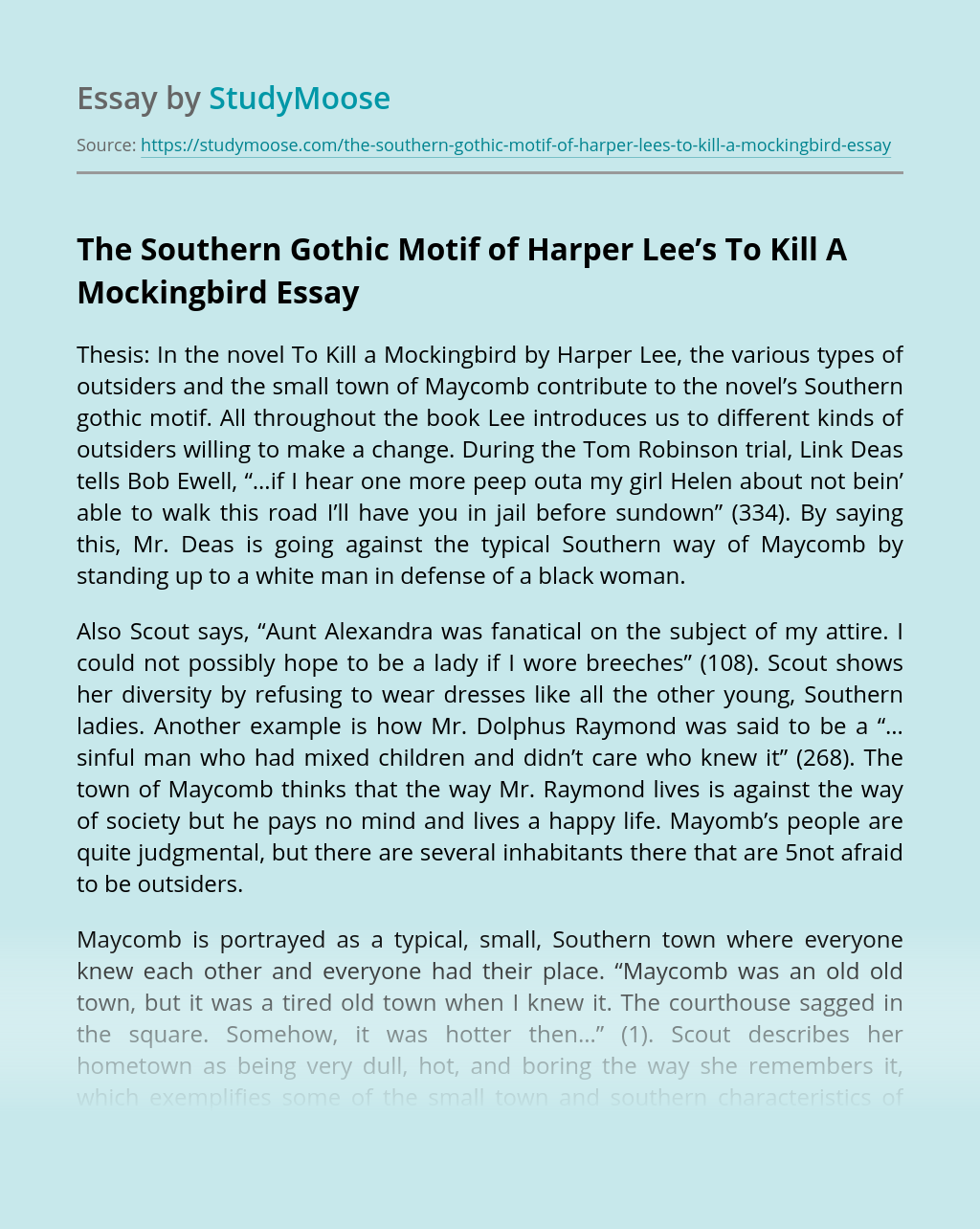