The solution of Disneyland Resort Paris

1.The main problem is that the Disney Paris was struggling to be profitable under Europe’s multi-culture background which is underlined by the specific French culture.

Tokyo Disneyland was the profitable Disneyland in the world, everything that worked well in the US was positively received in Tokyo despite the obvious culture distance. But unfortunately, when the Euro Disneyland opened in 1992 in Paris, the story did not follow the Tokyo script. The Decreased Revenues coupled with an investment burden that was hard to carry, put an end to the optimism and euphoria.

Don't use plagiarized sources. Get your custom essay on
“ The solution of Disneyland Resort Paris ”
Get custom paper
NEW! smart matching with writer

Financial difficulties had plagued the resort since it opened, crippling its ability to invest and creating urgency for short-term cash flow.

So how to adapt the multicultural business environment in Europe especially the cultural in France to make Disney Resort Paris became a profitable company is the most difficult challenge.

Dominique Cocquet, Executive VP of Development and external Relations, said “In the beginning, on the French side, there was some easy and non-rational anti-Americanism”. It is predictable that the Euro Disneyland experienced the cultural shock in France.

As the largest Western European country, France is a nation that takes immense pride in its history and prominent culture. Such cultural identities play a crucial role in French business culture. When encountered the foreign culture especially come from America French people have a kind of instinct reaction to push it away.

That is why the French president, Francios Mitterrand, stating that it wasn’t his “cup of tea.” I think it is quite typical, and represent the common thoughts and feeling of the French people when the Disneyland opened in Paris in 1992.

3.Along with the culture difference between US and France, there is a Multilanguage difference. Imaging the jungle guide in Europe warning passengers about a hippo will rises out of the river and spews water in six language, by the time he gets to Spanish, the hippo is already out and the Italians and the Dutch—whose language haven’t got to yet. That quite an example for issues caused by Multilanguage. Disneyland Paris had to learn to create emotion without verbal scripts.

Also the war in Iraq after 9/11 did create uncertainty and lower levels of tourism. The Germen economy shattered, other European economies went into decline and tourists turned to cheaper and more local travel. And at the same time, the Euro increased against most other world currencies, and Disneyland Resort Paris became more expensive relative to vacations outside Europe. Tour operators in the US, northern Africa and Asia, were desperate to attract tourists by offering vacations at loss-leading prices. And Euro Disney S.C.A had to repay *600 million in convertible bonds in late 2001.

The solution of Disneyland Resort Paris. (2016, Apr 18). Retrieved from https://studymoose.com/the-solution-of-disneyland-resort-paris-essay 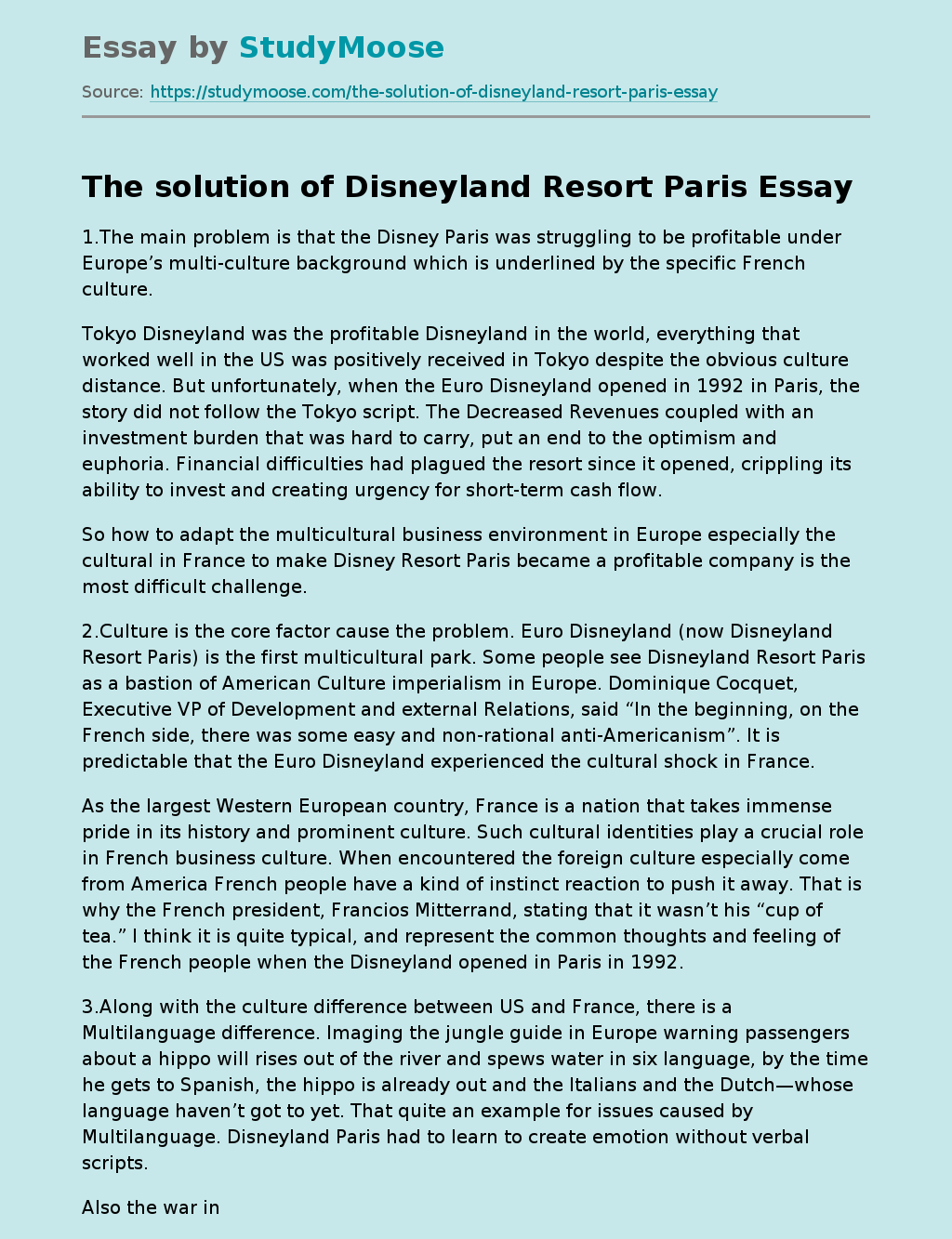