Don't use plagiarized sources. Get your custom essay on
“ The Social Issue of the Minimum Wage and the Need to Raise the Current Minimum Wage in America ”
Get custom paper
NEW! smart matching with writer

Poverty, as a long-run social issue, has not been well reduced by minimum wage.

Having minimum wage is necessary. Raising minimum wageseems more necessary. American workers are falling behind because of the lack of wages. Low-wage familiesare still strugglingin current situation. They need minimum wage to become a real living wage to help them survive.

Minimum wage should be raisednot only once in order to become a living wage. Low-wage families are hard to escape the poverty line. Minimum wage cannot provide poor families all their basic needs; even the living needs become optional. “A living wage for a single adult in Los Angeles is $23,640. If that wage earner also supports a second adult, the amount needed is $35,769. And if he or she supports another adult and one child, the amount needed is $44,972.” (“Living wage”) A minimum wage worker who works for $10.10 per hour can earn $21,008, which is lower than the living wages. If a low-wage family has more than three people, the situation becomes more serious for them. Minimum wage is not enough to provided support. If minimum wage can raise to a living wage, it will be more effective for families to maintain a standard living. If the low-wage workers cannot even get a place to live, minimum wage cannot guarantee their other needs. In truth, it is more important to have a living minimum wage to guarantee low-wage workers can have a guaranteed income to hold the family.

Furthermore, families who have one or more low-wage workers have an urge to raise the minimum wage. While the cost of food, gas, clothes and everything are raising, and the minimum wage keeps, how can a low-wage improve their lives or even keep their living standards? Low-wage families are forced to cut off some expenses, such as an apartment to live, a car to drive, or a backpack for their children. Minimum wage is not enough for a family keep a balance. “As of the early 2000s 34% of low-wage workers were in families that were far from poor, with incomes more than three times the poverty line. In other words, for every minimum wage worker who might directly benefit from the minimum wage, two workers in families with incomes more than three times the poverty line would benefit.” (Perry)Low-wage workers need more help and care. If minimum wage is not enough, families will face more and more social problems. Raising minimum wage may benefit not only one member in the family. For instance, minimum wage is raising one dollar per hour, a family that has two low-wage workers can earn 4000 dollars more in one year. It is a big amount for a low-wage family struggling. This extra 4000 dollars can provide them a stable place to live.

Opponents will argue that the current minimum wage is enough and fine for them. Keeping the current minimum wage will help themmaintainthe governmentaids. This means if the minimum wage had been raised, they will be above the line to receive the support from the government. If they get rid of the government support, they will lose benefits, which is not a good choice. For instance, government provides food stamps. Samuel Rivera and Sasha, a couple workingfor minimum wages, said, “I would rather not need it.” when they were asking the opinions for raising the minimum wages. They are not alone. “More than 5,200 people in the Lehigh Valley work full time and collect benefits through the Supplemental Nutritional Assistance Program, also called food stamps.” (Soper) There are groups of people, they think minimum wage is enough for them and they would rather keep the government support by other approaches. Raising minimum wage seems to be slow step for them, but the approaches like food stamp is helping them everyday.

In a word, minimum wage is not enough. It is necessary to raise the minimum wage to a living wage in order to help the low-wage workers keep a standard of living. Low-wage families are suffering because of the lack of minimum wages. It becomes a urgent social issues. The government, the society and workers are focusing on this and try to find the best way to solve the problem, that’s why people are debating over the minimum wage all the time.

The Social Issue of the Minimum Wage and the Need to Raise the Current Minimum Wage in America. (2021, Dec 13). Retrieved from https://studymoose.com/the-social-issue-of-the-minimum-wage-and-the-need-to-raise-the-current-minimum-wage-in-america-essay 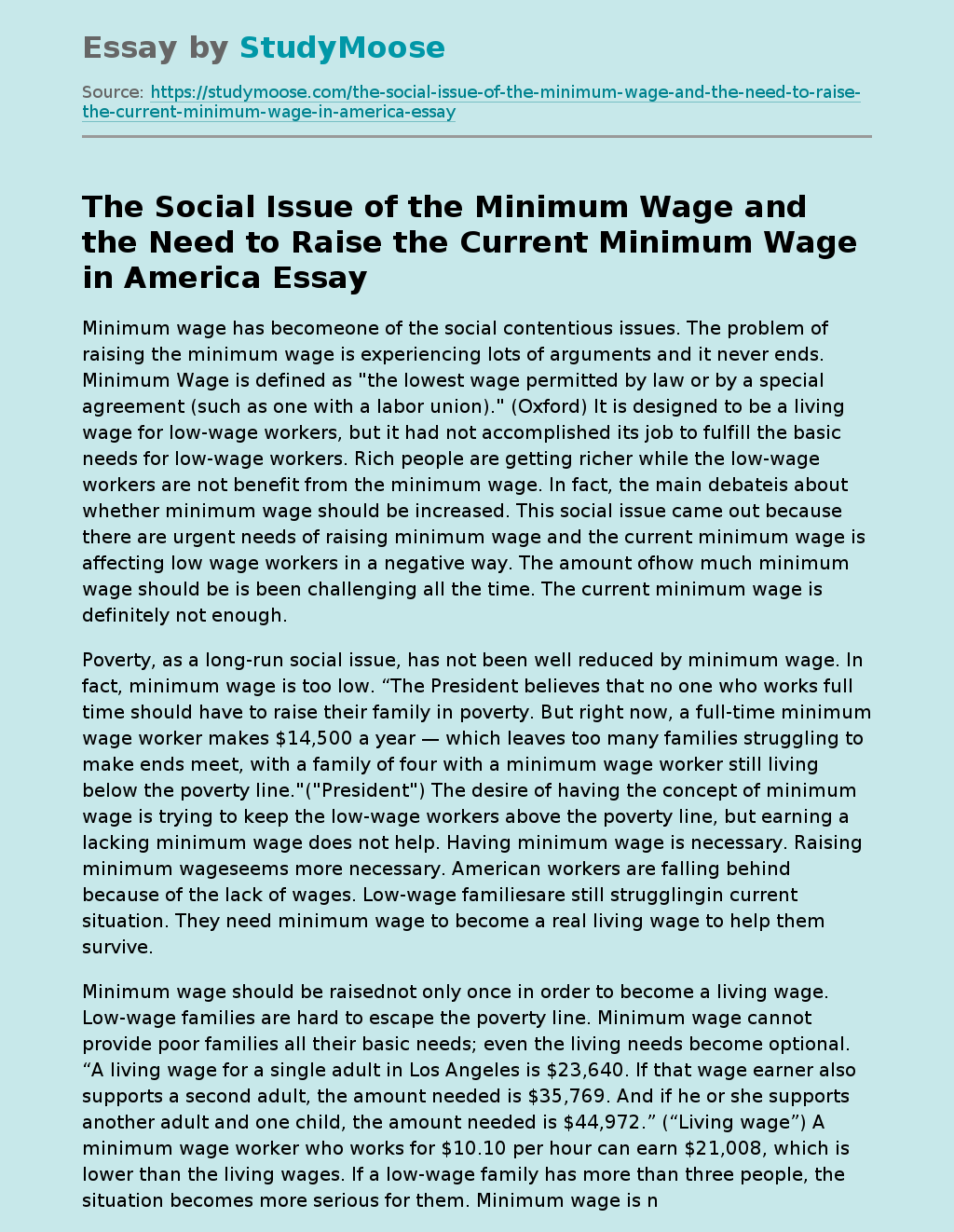