The Sky Is the Limit

This case takes place at Hardwell University and is a great example of the problems that can arise from someone given too much power. Dr. Reginald Lear took over as the School’s president and was offered a compensation package, which ranked highly for college presidents exceeding $700,000. This fraud was much different in how it was discovered, as it was not an anonymous phone call or an auditor. The fraud was initially uncovered by a local news outlet who questioned Dr.

Turn in your highest-quality paper
Get a qualified writer to help you with
“ The Sky Is the Limit ”
Get high-quality paper
NEW! AI matching with writer

The local media expressed concern about such a large investment during a time of budget cuts, layoffs, and tuition increases. They filed an open records request for copies of flight logs to determine if the president could justify spending an estimated $4 million on the plane. This ultimately led to them questioning many of his trips, including those to Alabama where he attended a black-tie event with the president there. After this was uncovered and questionable expenditures on the credit card were found the governor and chairman of the board appointed a special committee to investigate these allegations.

After the investigation began Dr. Lear offered to reimburse the university several thousand dollars for numerous private and commercial flights, regardless of the intentions. He felt this would clear the air and reduce further questioning. This being an obvious sign of him knowing he had abused his power somehow and was now trying to make it right. Any investigator would immediately see this as a red flag as you generally would not see someone pay for extra business related flights.

In the end this fraud only took about a month to uncover, as it was not hidden very well.

Travel expenses exceeded $23,000, University credit card had over $5,000 of charges, over $500,000 in unnecessary residence renovations, and two no bid contracts to friends over $300,000. After all this was uncovered by auditors by checking his flight logs and reviewing credit card charges. With these findings he was told to resign and offered a severance package of $400,000 and as part of the deal confirmed there were no other issues or else the deal would be voided. This fraud was different because initially the intent may no be obvious but looks more like a case of the president thinking he is entitled to everything he bought.

As the auditors over saw the process to make sure no university property was taken out a calendar was found that showed additional trips taken proving that Dr. Lear had lied. This calendar had highlighted trips that were personal that were not in the original calendar given to the auditors. After further questioning, it was determined that his administrative assistant to remove personal appointments from the calendar. Due to him altering a public document and lying, the contract with his severance package was considered null and void. This is where the intent to deceive was truly uncovered.

This proved that he had knowingly been taken flights and abusing his power to make personal trips. The controls that were missing here was an employee hotline, caps on travel expenses, disregard of existing policies in order to please Dr. Lear, and a chief financial officer. There was no chief financial officer to monitor financial aspects of the university and employees did not feel comfortable standing up to Dr. Lear. People were told to report directly to him making it very hard for people to turn him in because of a lack of an employee hotline.

The most obvious control missing is caps on travel expenses and all flights documented on a flight log. With the amount of money this university has it is important to put all of these controls in place to stop these things from happening again over $750,000 was fraudulently taken in many different ways. The auditors would most likely want a CFO just for the reason that there needs to be someone there to oversee what the president does. Even though technically he reports to the president it is important to allow him the opportunity to talk with the board.

They also would want an employee hotline as this fraud may have been discovered quickly from one of the many employees who witnessed this. The school itself would most likely agree with these controls however might feel that caps are a good control as they still want the president to be reimbursed for business expenses but be limited on the amount he spends at hotels, dinner, and other costs. The University did enact all of these controls and it has decreased the likelihood of a fraud of this magnitude happening again.

By having a more proactive approach and implementing some simple and complex controls they are able to ensure all employees are treated equally. When looking at this case it is easy to see that this president felt he deserved everything and clearly had too much power. Due to his success and the University willing to give him so much he felt that bending the rules a little would not be a big deal. This is not so uncommon as when someone from the outside is hired there is a desire to please that person especially when they are in such a high role.

This was a perfect example of an abuse of power, the university gave him a credit card to use and never really monitored Dr. Lear making him feel as if what he was doing was okay. It is tough to relate this to anything or anyone other that someone in much higher role than me. However recently with my new job in a new start-up company there was a problem that had similar characteristics. The manager of the store was a friendly, smart, and a great leader. His experience in the army and roles in the past made him a powerful figure and a great leader.

The owner made sure the manger was happy and gave him everything he really needed. A general accounting task for this particular company was for two people to authorize every receipt from the company credit card. The expenses would range from store decorations to employee lunches. I shared the accounting duties with one other accountant and we split time, this was a great control as it served the same role as mandatory vacations. It would be tough to commit fraud due to both of us doing the same job on different days and checking each other’s work.

One day I came in I had realized that there were three receipts filed that were just signed by the store manager. I talked to the other accountant first and reminded her that someone else must authorize these receipts. She had felt that because it was the store manager that one signature was sufficient. This is where I see the similarity with the case previously discussed. Just because someone has such a high role it does not mean they should be exempt from common rules. Whether the other accountant was afraid to confront the manager or felt that he would never commit fraud was a mystery to me.

The process was fixed and I feel that although the intention was never to abuse the company credit card the opportunity was there. I feel that it is very easy to be intimidated by a person who is above you but is important as an accountant to show that no matter what the correct controls are followed. By allowing small controls to be overlooked it shows that there is a lack of appropriate oversight in the accounting office. Every control has a purpose and no matter the position every employee should be treated equally and everyone should be subject to the same rules. 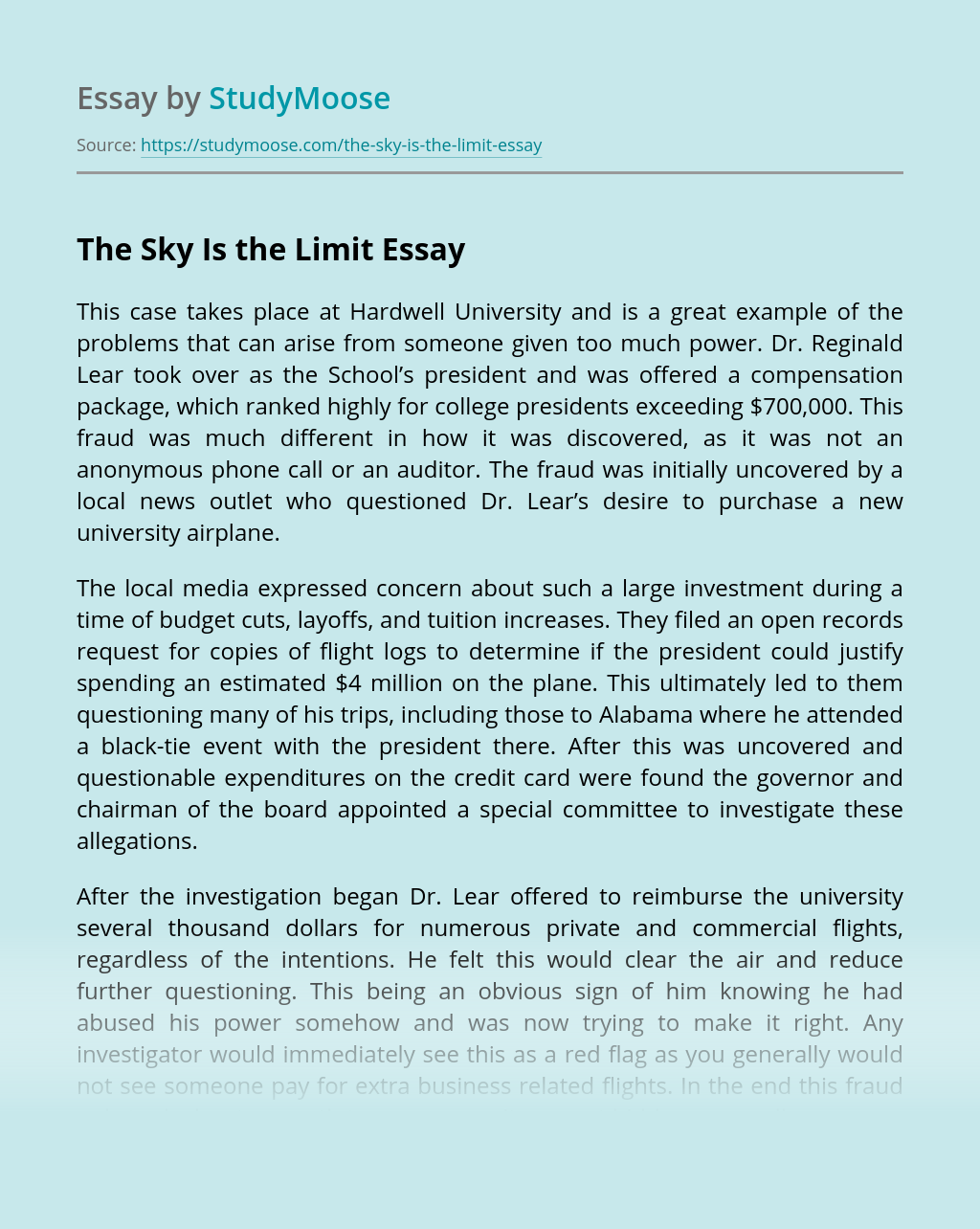 Turn in your highest-quality paper
Get a qualified writer to help you with
“ The Sky Is the Limit ”
Get high-quality paper
Helping students since 2015
Stay Safe, Stay Original