"The Skating Party" by Merna Summers

What one may want is not always what the heart truly desires, until the time that one realizes that he/she has lost it. Following is an analysis taken from the story “The Skating Party” in which the author Merna Summers considers the life-changing journey of one of the chosen characters during the process of self-discovery. The story in relation to self-discovery and its implications is that “self-discovery” is an intricate process that may not always reflect the best of implications.

Therefore its effects have several paths, which are based upon how one comes across it.

In the Story Skating Party Maida and her Uncle Nathan realise how important this self-discovery had turned out to be for both of them. Hence, talking about the importance of self-discovery, we must mention that its absence can lead us to feel loneliness, incompleteness and as if a major part of our lives were being greatly impacted on, which was the case for Maida. She felt as if her uncle was hiding something and that there was something she was not known of.

This clarifies that self discovery is not always as an easy challenge to face and to except. Making certain decisions and taking actions accordingly without the lack of knowledge can harm you. At such a stage one is unaware of the limitations and the strength that lies within.

Uncle Nathan knew this because he had been the culprit of his own choices. His choice had gone against his will because of which he eventually lost both Eunice (his fiancé) and Delia. And so what he had not known about himself and his true desires had hurt him, rather it had a shattering effect on the person who he had become.

Self-discovery can appear in our lives through many disguises. Beneath the outline of this story is laid a path that ends in tragedy and what we may call self-deception but is what truly turns out to be self-discovery for Maida and her uncle. Uncle Nathan had truly loved Delia when Eunice attracted him. At the night of Eunice’s death Uncle Nathan had a chance of discovering him self which came as a disguise of his choice to who he really loved and saved as he said “I could not see there faces but I could see their hands on the edge of the ice, the one pair of arms had fur on them but I reached for the other pair”. [Pg 46, Summers]

Reaching towards the point in life whereby self-discovery has left its implications, what comes it concern is our acceptance of what we have discovered. This may vary from person to person. Uncle Nathan had feelings of remorse for what he had done but not for loving Delia! He realised that he should not have been committed to Eunice when he actually had true feelings for Delia but his heart had spoken the truth when it was too late. For many of us that go through such changes, these things leave many grave scars with us. It was almost the very same with uncle Nathan, he would never forget what had happened that night but Delia’s absence after that night, had killed the inner part of him, it was after that he was never wanted to marry or love again.

Self-discovery is stated being ironic in this story, which is shown by the Stone Man. After the character went through the process of self-discovery he was complete of his own self. Although the love of his life was missing he was still as complete as the stone man. He had gone through what his fate had awaited him but just like the stone man had disappeared from the village, Delia and Eunice had disappeared from his life. It was again a matter of choice.

Uncle Nathan’s father had decided to remove the stone man and made his choice between rocks and wheat and he chose wheat. But when Maida asked him for his opinion he said “I wanted both”. [Pg 34, Summers] This determines and also proved to him that his choices were his weakness. He could not decide amongst his love or living, in other words amongst Delia or Eunice.

Except the fact of the implications mentioned so far self-discovery could be looked upon by an emotional point of view. This would be relevant to this story as Uncle Nathan was described as a man who did not show his emotions but his actions were very much based on them. Emotional Point of view could suggest that what one does is not always what one wants to do (as mentioned earlier), it could be that due to a certain situation one does what has to be done to in order to sustain ones personal stability and survival. We could call this his survival because what he decided was what he was to carry with him in future.

Again I shall state that ones desires are not may not always explain what ones heart desires. Self-discovery is not only what we understand by the name “self-discovery”; it is surely a lot more. It does not always lead to the same situation for everyone and neither does it have specific implications. It can affect us in any different ways. Rather as the essay explains it as complicated process and what some may interpret as a tragic experience. We can stop it from being a part of our lives but never from the curiosity it holds that attracts us to discovering it.

"The Skating Party" by Merna Summers. (2016, Jun 20). Retrieved from http://studymoose.com/the-skating-party-by-merna-summers-essay 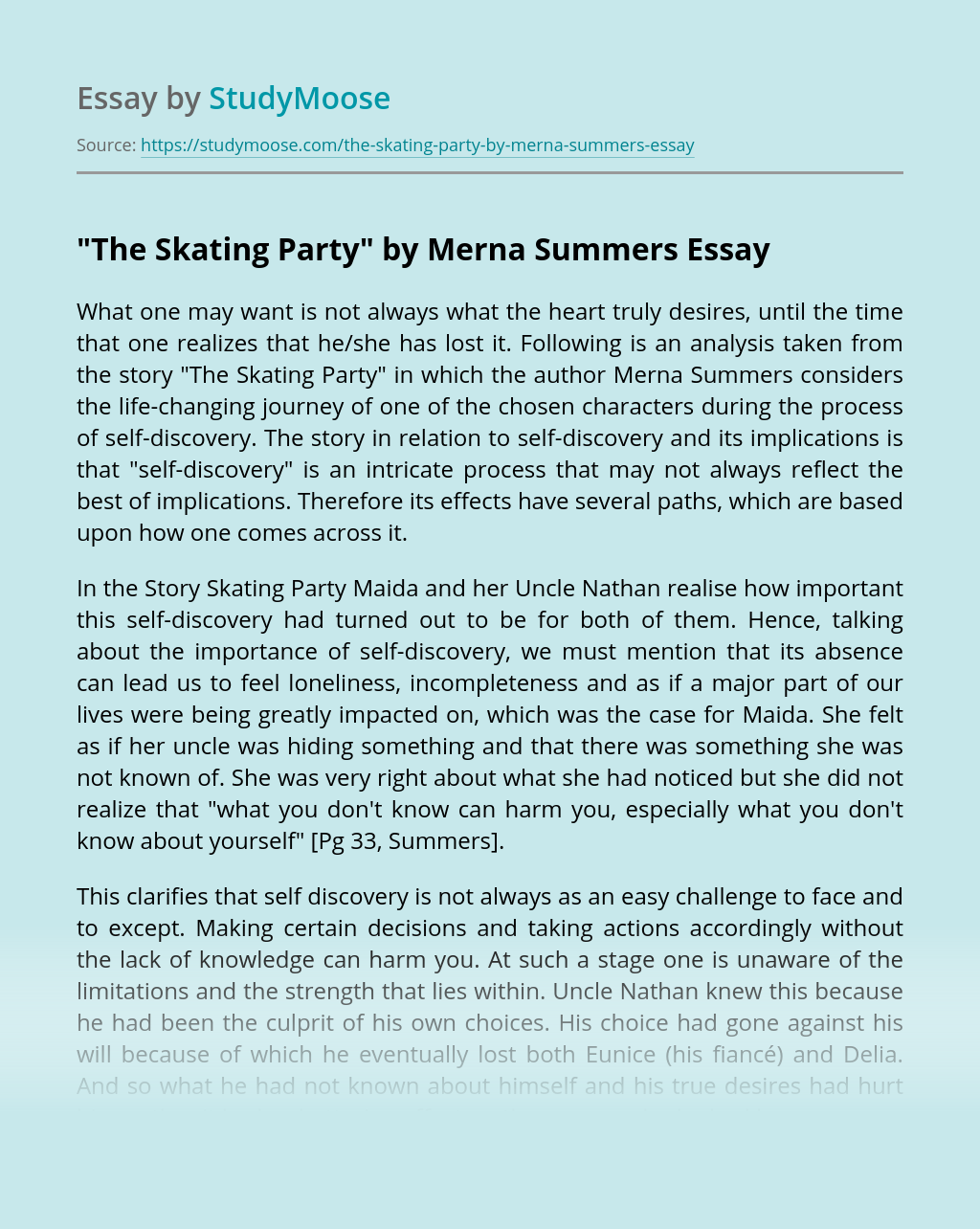 Don’t waste time
Get a verified expert to help you with “The Skating Party” by Merna Summers
Hire verified expert
$35.80 for a 2-page paper
Stay Safe, Stay Original