The significance of the communist revolution in China 1949

The Chinese Revolution was among the first hot conflicts of the Cold War, and its ramifications were certainly among the most far-reaching. The most important long-term effect was to create a Communist state with the size and power to stand as a rival to the Soviet Union within the Communist world. The Soviets and Chinese were initially allies, but eventually split apart, and fought bloody border conflicts in the 1960s. The Sino-Soviet split forced many Communist states to choose sides, with China even invading pro-Soviet Vietnam in 1979.

Don't use plagiarized sources. Get your custom essay on
“ The Sino-Soviet Split ”
Get custom paper
NEW! smart matching with writer

The Sino-Soviet Treaty of Friendship, Alliance and Mutual Assistance or Sino-Soviet Treaty of Friendship and Alliance for short, is the treaty of alliance concluded between the People’s Republic of China and the Soviet Union on February 14, 1950. It was based to a considerable extent on the prior Treaty of the same name that had been arranged between the Soviet Union and the Nationalist government in 1945 and it was the product of extended negotiations between Liu Shaoqi and Stalin.

Mao travelled to the Soviet Union in order to sign the Treaty after its details had been concluded and this was the only time that he travelled outside China for the duration of his life. The Treaty dealt with a range of issues such as Soviet privileges in Xinjiang and Manchuria and one of its most important points was the provision of a $300 million loan from the Soviet Union to the People’s Republic, which had suffered economically and logistically from over a decade of intense warfare.

The treaty did not prevent relations between Beijing and Moscow from drastic deterioration in the late 1950s – early 1960s, at the time of the Sino-Soviet split. In light of opening up China to the international market and the expiration of the Treaty, Deng Xiaoping wanted China not to negotiate with the Soviets unless they agreed to China’s demands. Those were that the Soviets retreated from Afghanistan, removed their troops from Mongolia and Sino-Soviet borders and stopped supporting Vietnam’s invasion of Cambodia.[1] The treaty expired in 1979, which allowed China to attack Vietnam, a Soviet ally, in the Third Indochina War as a response to Vietnam’s invasion of Cambodia, as the treaty had prevented China from attacking Soviet allies.

Sino-Soviet relations from 1958 to 69 The Sino-Soviet split (1960–1969) was the worsening of political and ideological relations between the People’s Republic of China (PRC) and the Union of Soviet Socialist Republics (USSR) during the Cold War. In the 1960s, China and the Soviet Union were the two largest Communist states in the world. The doctrinal divergence derived from Chinese and Russian national interests, and from the régimes’ respective interpretations of Marxism: Maoism and Marxism–Leninism. In the 1950s and the 1960s, ideological debate between the Communist parties of Russia and China also concerned the possibility of peaceful coexistence with the capitalist West. Yet, to the Chinese public, Mao Zedong proposed a belligerent attitude towards capitalist countries, an initial rejection of peaceful coexistence, which he perceived as Marxist revisionism from the Soviet Union.

Moreover, since 1956, China and the USSR had progressively diverged about Marxist ideology, and, by 1961, when the doctrinal differences proved intractable, the Communist Party of China formally denounced the Soviet variety of Communism as a product of “Revisionist Traitors”, i.e., the Communist Party of the Soviet Union, headed by Nikita Krushchev. The divide fractured the international Communist movement at the time and opened the way for the warming of relations between the United States and China in 1971. Relations between China and the Soviet Union remained tense well into the 1980s, and were not considered ‘normalized’ until the visit of Soviet leader Mikhail Gorbachev to Beijing in 1989. 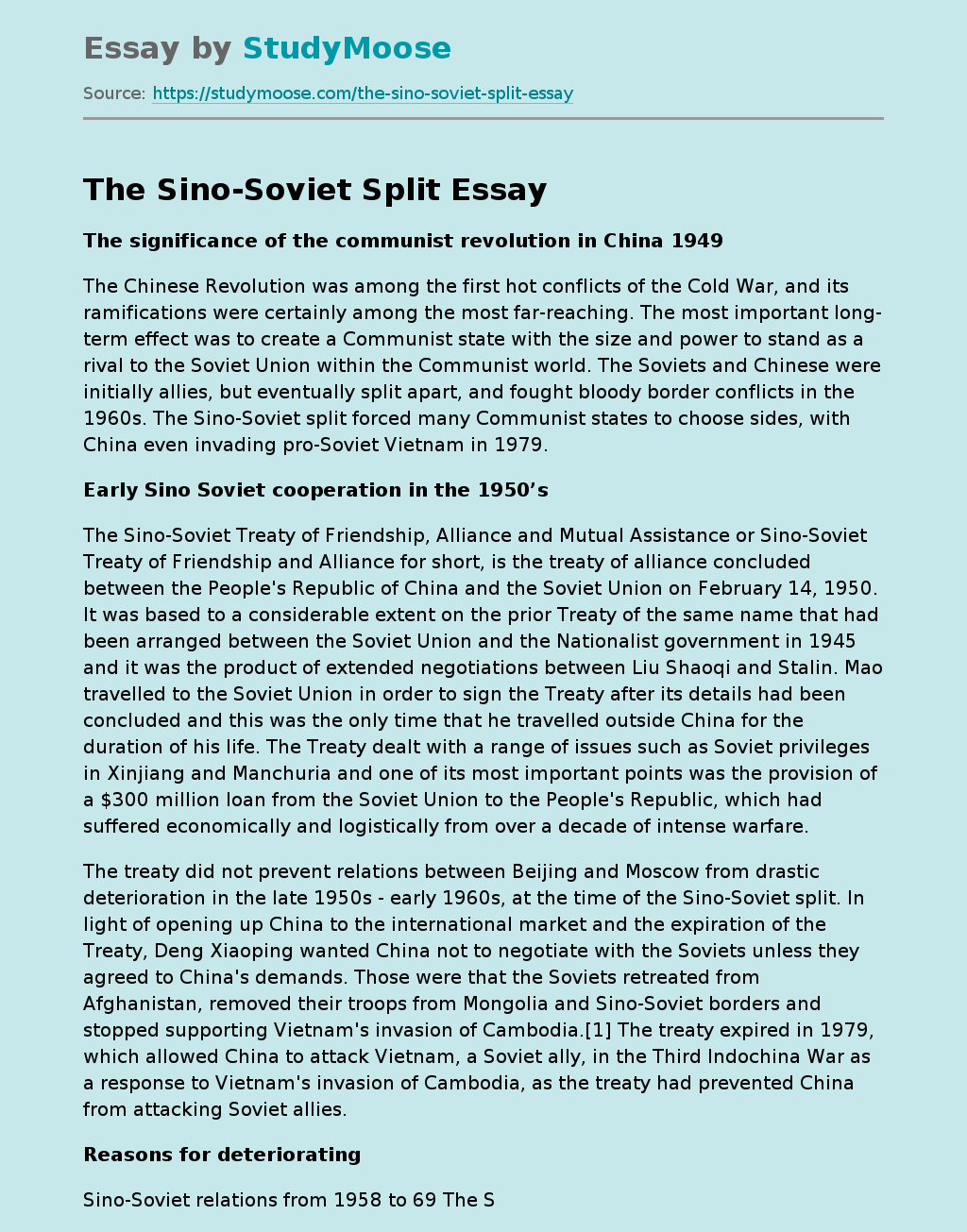