The Simple Gift, a novel by Steven Herrick, is based on the journey of a teenage boy named Billy. The book highlights that material possessions are not all that matters, and that often it is a sense of belonging that really shines through during desperate times. Sometimes money even if earnt can be valueless, freedom can be found easier if you lack physical possessions, and simply letting go of the past and leaving it behind can lead to you finding happiness through better, stronger relationships.

Don't use plagiarized sources. Get your custom essay on
“ The Simple Gift novel by Steven Herrick ”
Get custom paper
NEW! smart matching with writer

Quite often people seeking belonging see no ultimate value in money. Billy shows us this in the book when he buys Caitlin a ring immediately after receiving his pay. He feels he has no real desire to keep the money, despite the fact that he worked his ass off all weak to earn it. In his mind the work was to cure boredom, and he would much rather spend what was considered rightfully his on someone else; to show how much he really cares.

In return this act of kindness towards Caitlin gave him a sense of belonging.

During the book Caitlin always talks about how Billy has it better because he lacks the physical possessions that make you set in life. This is probably true, but for Billy getting to this stage forced him to rid pretty much all his physical possessions. “As dad stood over me, and said, no more sport, no more forever. ” The relevance of this quote in this paragraph could be questioned, but it signifies two physical possessions of Billy before he left home, sport, and his father.

These two possessions are the main reason why Billy left and played a strong role in his decision. His father took away his love of sport, among many other things, and when Billy realized that it was getting too much for him, he left behind the few remaining things he still cared for; Bunkbrain his dog was hardest for him to leave. Billy then arrived in Bendarat with nothing; he wanted a fresh start, with nothing. Sometimes if you fail to move on from the past you can become stuck in a continuous cycle for the rest of your life.

Old Bill is a character from The Simple Gift whom clearly illustrates this cycle; he is left with the burden of his daughter’s tragic death, and his wife passing away exactly a year after. These events in his life caused him to become somewhat depressed, in which he cured or more accurately buried through drinking alcohol. His horrible addiction to alcohol affected his daily life, as he could no longer stand to live in his home, he moved into an old train carriage near the station.

One day he met Billy, whom he absolutely hated, though he knew that Billy would do him good. As their relationship becomes stronger he realizes that Billy looks up to him, and that he really should try to become a better role model. Slowly Billy and Old Bill form a father and son type bond, which does them both good, but in the end Old Bill leaves Bill to try and make a better life for himself as he knows if he stays in Bendarat e will never be able to let go of he past.

The key point in Old Bill’s moving on is giving the keys to his house to Billy, so he can start a life with Caitlin. This letting go is the key to new chapters in both Billy’s and Old Bill’s lives; chapters with happiness, and belonging. In conclusion The Simple Gift covers various aspects, some of which are stated above, that clearly outline and expand the idea of belonging, and how sometimes the sense of belonging way overrules all material possessions. 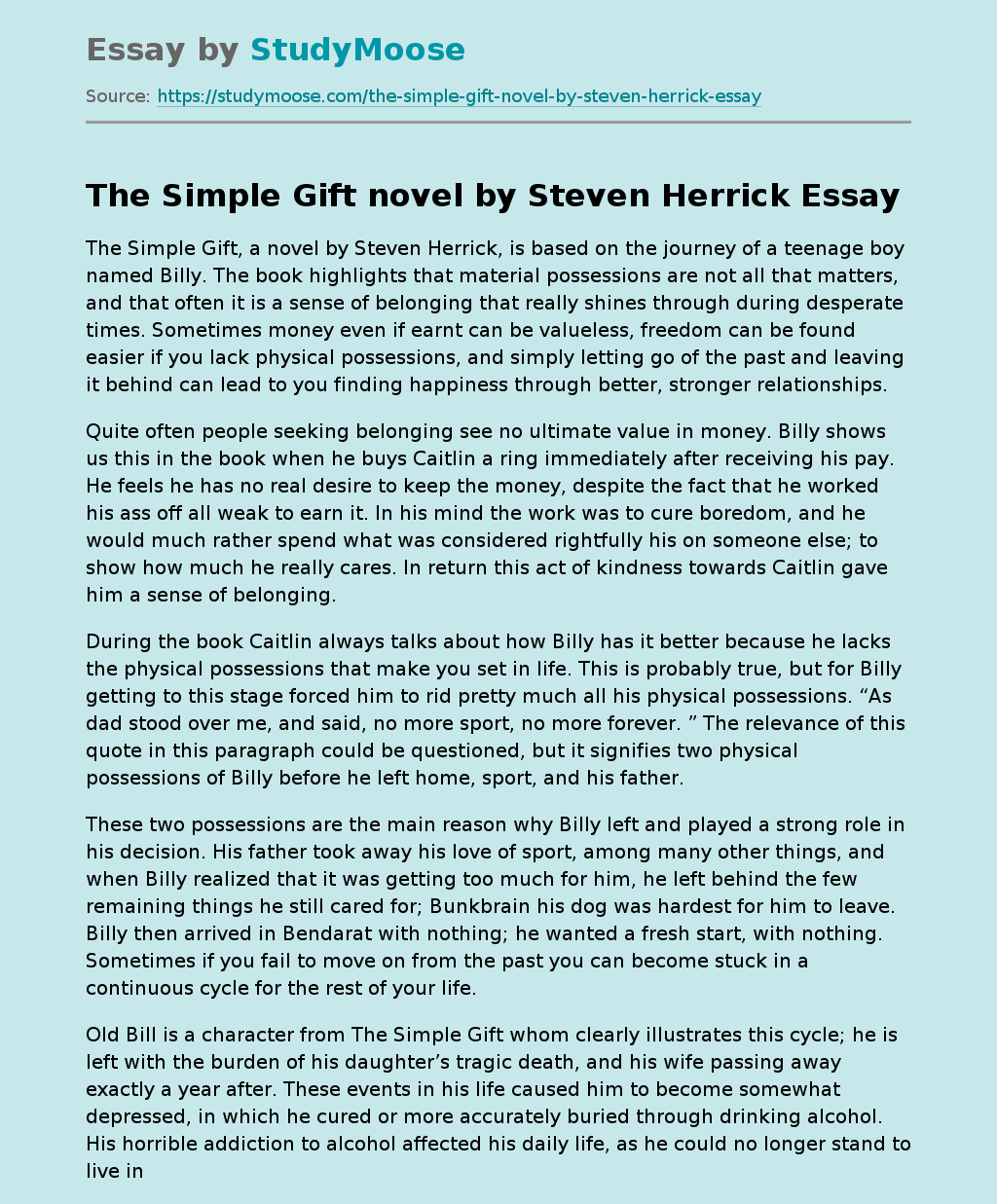