The story The Simple Gift by Steven Herrick, focuses on Billy, who is a sixteen year old boy living in Australia. Billy reveals himself as a reject, a thief and a troubled character who rejects school. Billy’s ‘alienation’ is a cause of the combination of all his troubles, his abusive father, rejection from school, bad neighbourhood. Billy runs away from his family on a freight train, and packs a set of unusual things like cigarettes and alcohol. Whilst catching a train, uncertain where the train will take him, bad weather, wind and rain recalls the violent significant memory of his father.

Don't use plagiarized sources. Get your custom essay on
“ The Simple Gift Book Summary ”
Get custom paper
NEW! smart matching with writer

After travelling for a while he ends up at an old railroad town called Bendarat. Billy is homeless but he learns how to easily find food without ‘stealing’ and also keep clean.

Unlike most other homeless people, Billy accepts his homeless condition and is quite proud of his street smart ways of surviving. Billy meets Caitlin and he falls in love at first sight, Caitlin’s life is an exact opposite of Billy’s, she comes from a wealthy family and is largely dissatisfied with her life.

Another friend Billy meets is Old Bill, a homeless drunk living next to Billy’s carriage. Old Bill is traumatized due to the loss of his daughter Jessie, after an incident of Jessie falling out of a tree, this was the reason Old Bill was led to be homeless. When Billy first met Caitlin he thinks she was a spoilt, stuck-up, rich girl.

But Billy is mistaken when he chats to Caitlin, which first starts from just smiling to each other to chatting on a daily basis. They become good friends, which eventually turns into a relationship.

Billy and Caitlin have strong connection and become very intimate with each other. Old Bill and Billy work at the cannery, it is here when Billy learns how much a dollar is really worth, and Old Bill learns not to spend all his money on alcohol. Billy matures a lot throughout the book, especially when he meets Caitlin. This is shown through the things he says, his thoughts, how he acts and his actions for example, Instead of stealing a ring for Caitlin he buys it with his own money, he also helps Old Bill drinking alcohol. At the end of the book Billy finally gets caught out by the welfare worker, and tells him to move on, but Old Bill gives Billy the key to his house. He lets Billy live in his house and take care of it. Old Bill also told the welfare workers some lies, with his previous experience as a lawyer. 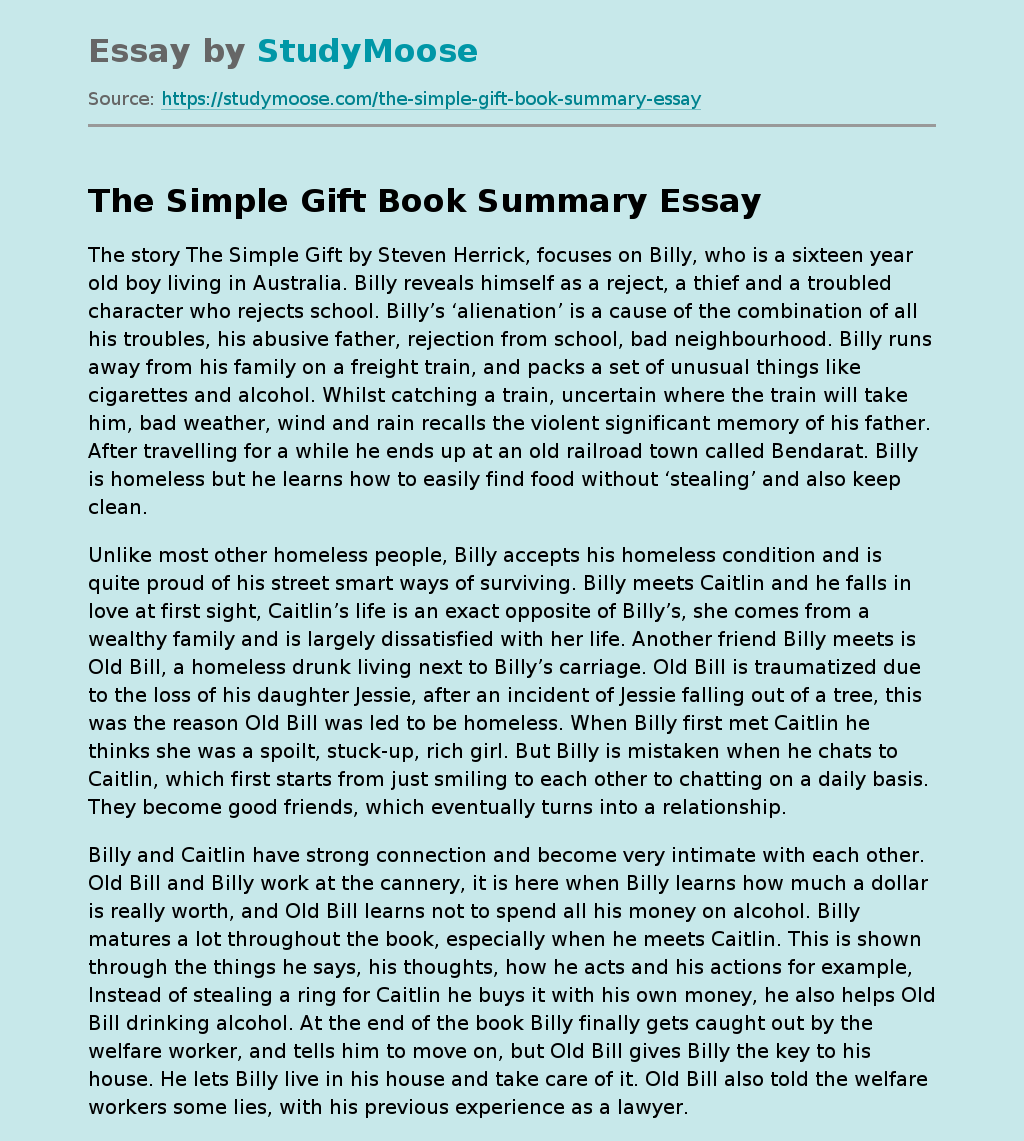