The readings “Stay Sweet As You Are,” by Doug Lantry and “Girl,” by Jamaica Kincaid have many similarities and differences. Both target women but, have differences in time period and behavior. These stories both have interesting backgrounds. In “Stay As Sweet As You Are” Lantry analyzes a few different articles in different decades to prove Women’s behavior to be unique in each case. While the background in “Girl” Jamaica Kincaid from New York tells also is about the women’s behavior, but looks into a specific decade and follows the life of one woman up through adulthood.

Don't use plagiarized sources. Get your custom essay on
“ The Similarities and Differences between Stay Sweet As You Are by Doug Lantry and Girl by Jamaica Kincaid ”
Get custom paper
NEW! smart matching with writer

Since these articles both focus on women they it’s their main focus. The unique fact that both have women as a main topic in general is nothing special, expect for the different age groups they are targeting in each article.

In “Girl” by Jamaica Kincaid and in “Stay as Sweet As You Are” by Doug Lantry discuss various age groups of women.

For example, they both talk about teenagers. In Lantry’s piece he, at one point, while analyzing the Listerine ad notices a “ seemingly innocent teenage girl playing records on a portable phonograph… leaning forward with her broad smile suggesting that she will kiss a boy with here sweet breath”(Lantry 49). This ad was about Listerine targeting young females and if one were to use it would result being able to get a boyfriend and have a romantic time. While in Kincaid’s piece, she references teenagers briefly when she is talking about “playing marbles” because this is what a teenager might do (Kincaid 841).

Another example of the groups of women they mention is middle aged women married, or have an active life. In Lantry’s piece, when analyzing a Lux soap ad, he notices how it targets women because they had the celebrity Irene Dunne along with other unnamed stars appear in it. This resulted in the publishers of the ad “Girls who know this secret always in out” to be able to say “9 out of 10 glamorous Hollywood stars” use this product(Lantry 46). Since celebrities were appearing in the ad especially women celebrities its main focus was to make women copy celebrities and possibly be like them. While in Kincaid, she targets middle aged women when she talks about women at home. She does this by what a women does when she is home working. For example, a women at home has many duties anything from cleaning to house to dealing with guests.

Though women at home and at other places have had various duties these duties along with other things varied based on the time period. This time period difference between Lantry and Kincaid’s writings only take place a few decades, at most after, the other. For example, Lantry focuses on the time period between 1920’s though the 1950’s, while Kincaid is only focusing on the 1970’s. These time periods, over the course of history, eventually changed in that women could do new things. For example before the 1920’s women in the United States couldn’t even vote and after shortly after were only starting to gain momentum throughout the 1920’s and 1950’s. In Lantry’s piece, he talks about how women were just getting into this new era because now they can possibly “make that dream come true of catching a man, or becoming wife(Lantry 44)”. This being able to go out and get a man of one’s dreams, though hygiene and other products allowed women at least some more freedom.

Meanwhile Kincaid’s piece, which takes place in the 1970’s after women have gained momentum and more freedom. Women are still bound by limitations. These limitations being that women are still brought up a certain way in the sense that there is still things one could and couldn’t do. For example, one limitation in “Girl” is that if women couldn’t “squeeze bread to make sure it was fresh” in a bakery how would she know if the bread isn’t stale(Kincaid 841). This limitation is only one of the possible things that women of this time period couldn’t do. While other limitations were mostly based on one’s behavior instead of actions.

The behavior limitations were, and sometimes still is, the main problem of how women should and shouldn’t act. For example in Lantry’s articles he in analyzing he mainly focuses on the fact that if women use hygiene products like soap, they will have “velvety skin and happy effects, with eventual marriage”, and if they used a product like Listerine it will also lead to good results of “romantic or matrimonial success”(Lantry 44, 49). On the other hand, if you don’t use these products “you’re headed for boredom and loneliness”(Lantry 49). In Kincaid’s article a girl’s behavior is also based on what one should, and shouldn’t do. In her case she lists many examples of events that could happen and how to deal with them. For example, she talks about anything from “always eating your food in such a way that it won’t turn some else’s stomach” to “how to smile to someone you like, or dislike completely(Kincaid 840, 841)”.

If you do all the things you should then good things will happen like learn “how to make good medicine to cure a cold”, or learn “how to love a man (Kincaid 841). While on the other hand if you don’t do these things bad thing also will happen that include anything from getting sick to looking like a slut. For example, if you “pick people’s flowers you might catch something”, or if you “throw stones at a blackbird it might not be a blackbird”, thus harming a possibly innocent bird(Kincaid 841). If you do this things it was meant as a warning for women to be clean because if you pick flowers, or throw stones they might be dirty and women are suppose to be clean. This clean factor was so you could get the man a women always wanted while not acting like men. Though these behaviors have consequences and rewards, the choice’s in the end of what the women want to do is their choice.

In conclusion, the comparison between” Girl” by Jamaica Kincaid and “Stay Sweet As You Are” by Doug Lantry have differences along with similarities. These similarities include the main point being focused on women along with rewards and consequences for your behavior. While on the other hand the main difference is the fact that Kincaid and Lantry are focusing on different time periods. This time period difference is important because it showed how women progressed through the decades up until the 1970’s. Then eventually learned to live with consequences and rewards based upon the actions that they choose.

The Similarities and Differences between Stay Sweet As You Are by Doug Lantry and Girl by Jamaica Kincaid. (2021, Sep 27). Retrieved from https://studymoose.com/the-similarities-and-differences-between-stay-sweet-as-you-are-by-doug-lantry-and-girl-by-jamaica-kincaid-essay 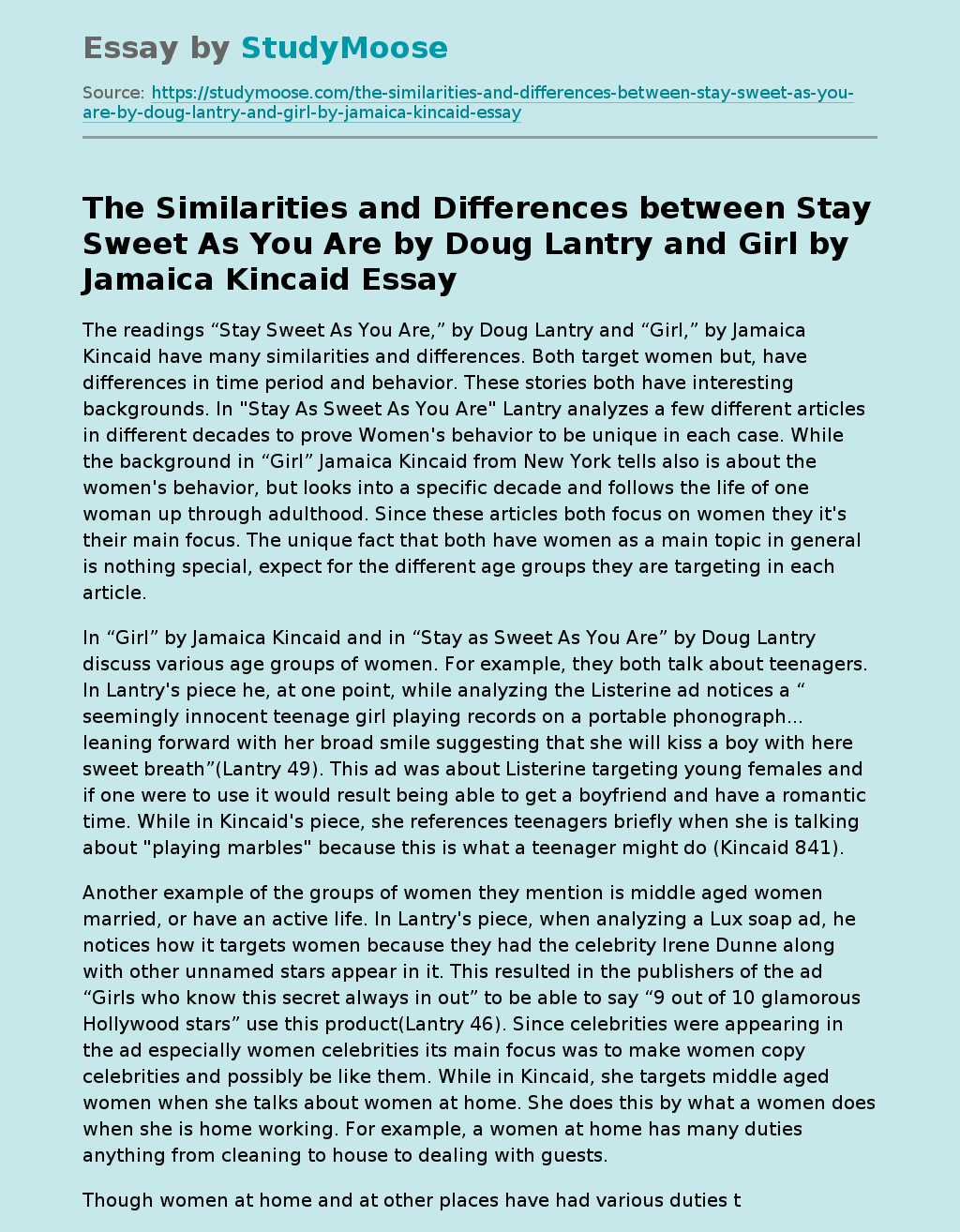