The Significance of the French Revolution

Prior to 1789, France was in a dire state of conditions. King Louis XVI’s government was facing financial difficulties, and faced with few other options, the king imposed taxes on the people. What ensued was an explosion of rage in the French middle and working class that had been built up over the last hundred years–what we now call the French Revolution. While the French Revolution, like many other revolutions, occurred in response to the government’s incompetence, what sets it apart from other revolutions in Europe is that it marked the birth of democracy.

This concept, though idealistic in theory and leading to a large number of deaths, misuse of power, and complete terror, gave rise to equality of conditions, power in the people, and largely, the foundation beneath the democracy the world has come to accept today.

One of the greatest examples of the French Revolution’s significance was the extent of the unity the French experienced subsequent to the Revolution and Napoleon.

For hundreds of years, the French people knew what it was like to live under the rule of an autocratic monarchy, and they thrived under such rule. Louis XI, also known as the Spider King, as well as the infamous Louis XIV are both notable examples of successful Machiavellian rulers who used their power wisely and consolidated the classes’ needs, and in effect, created a unifying nation. What made the rulers of the French Revolution, specifically Robespierre and Napoleon particularly different and successful, though, was truly secular leadership that paid attention to individuals of all classes.

Much more so than before, during the French Revolution, Robespierre appealed to the San Culottes, effectively changing price controls so that the working class could afford food at decent prices. In return, Robespierre got an impassioned fight to the death from his working class peasants, and in effect, mobilized the total war effort, using each individual efficiently and thus defeating the rest of Europe’s armies convincingly and effectively. Clearly, had it not been for the difference of the lower classes, France would not have been victorious on all fronts, and the French Revolution Robespierre and the Mountain’s Reign would not have made the impact it did.

Likewise, Napoleon was different than previous French rulers and more successful in large part due to his tremendous diplomatic skill at appealing to all groups of people. In order to solidify his domestic strength, Napoleon worked out numerous unwritten agreements with powerful groups in France, these which received favors in return for their services. Napoleon’s famous Civil Code of 1804 appeased and gained the support of the middle class when he maintained the two principles of equality of all male citizen and absolute security of wealth and private property. Napoleon’s establishment of the Bank of France was also vital in that it created a body which served the interests of state as well as his government, thus solving problems posed by the unhappy Sans Culottes during the reign of the Directory. Thus, by continuing to vouch for this new economic order, Napoleon also gained support from the peasantry, who saw themselves more empowered in terms of land and status compared to before.

As if this wasn’t enough, Napoleon also strengthened the bureaucracy, continually empowering each level of the bureaucracy and rewarding them well for their services; he also signed the Concordat of 1801 with Pope Pius VII in order to ensure the political influence of his own government over church affairs. In fact, except for the critical status of women, who saw their power decline dramatically from the actual French Revolution to after the Napoleonic Era, all other classes in France gained became more prominent and more empowered. This renewed sense of importance contributed greatly to a patriotic, nationalistic fervor as each citizen felt increasingly important individually and a part of something great. Under Robespierre and Napoleon, citizens of France began to feel that they could effect change, that France was not just a king’s nation, but a nation of the people as well.

No argument over the significance of the French Revolution would be complete without discussing the political elements that were created during the period of time. Prior to the French Revolution, France was dominated by absolutist regimes, most notably by Louis XIV. With the French Revolution and the creation of the Declaration of the Rights of Man and Citizen, France was introduced to a constitutional government, and the ideal of democracy were unleashed upon the nation. Many critics have argued that in all the bloodshed, terror, and gore of the French Revolution, France actually gained nothing democratic out of it; however, this certainly is not true. While the rise of the Mountain and Robespierre, and the unfortunate Reign of Terror could understandably be seen as incredibly undemocratic, one must look past that to the goal Robespierre had intended: to create a society in which “liberty, equality, and fraternity” were emphasized, where the French people could rule as one and not be oppressed by the over-powerful nobility.

Granted, what was of noble intent ultimately ended in disastrous terror, but as with all experiments, there are bound to be successes and failures. The same can be said about Napoleon’s reign. Although he was clearly a dictator, he was driven by democratic principles and driven by what was best for the “French republic.” From a purely theoretical viewpoint, the French Revolution and Napoleonic Era were lessons well-learnt in democracy, because they taught France, as well as the rest of Europe and America, what the limits of popular rule was, and that there was such a thing as “tyranny of the majority,” as Alexis de Tocqueville dubbed it. Subsequent philosophical ideas, such as limited popular sovereignty or checks and balances, were all highly influenced by the French Revolution and reign of Napoleon. Had it not been for this important chain of events, when would Europe have learned that democracy was a game that could easily go wrong?

There is no dispute today that the French Revolution was the most important revolution to occur in Europe in recent memory. Not only did it cause disastrous outcomes, including a Reign of Terror that was dehumanizing, gory, and unimaginable in this day and age, but more importantly, it set the tone for what a democratic government could potentially become, in terms of equality, liberty, and fraternity. France experienced bits and pieces of all three during the French Revolution, and although it the Napoleonic Era ultimately ended in a similar situation as compared to before the French Revolution, it was clearly the ideas and potential of democracy which gave hope to the rest of Europe for the next couple of centuries.

The Significance of the French Revolution. (2016, Jun 28). Retrieved from http://studymoose.com/the-significance-of-the-french-revolution-essay 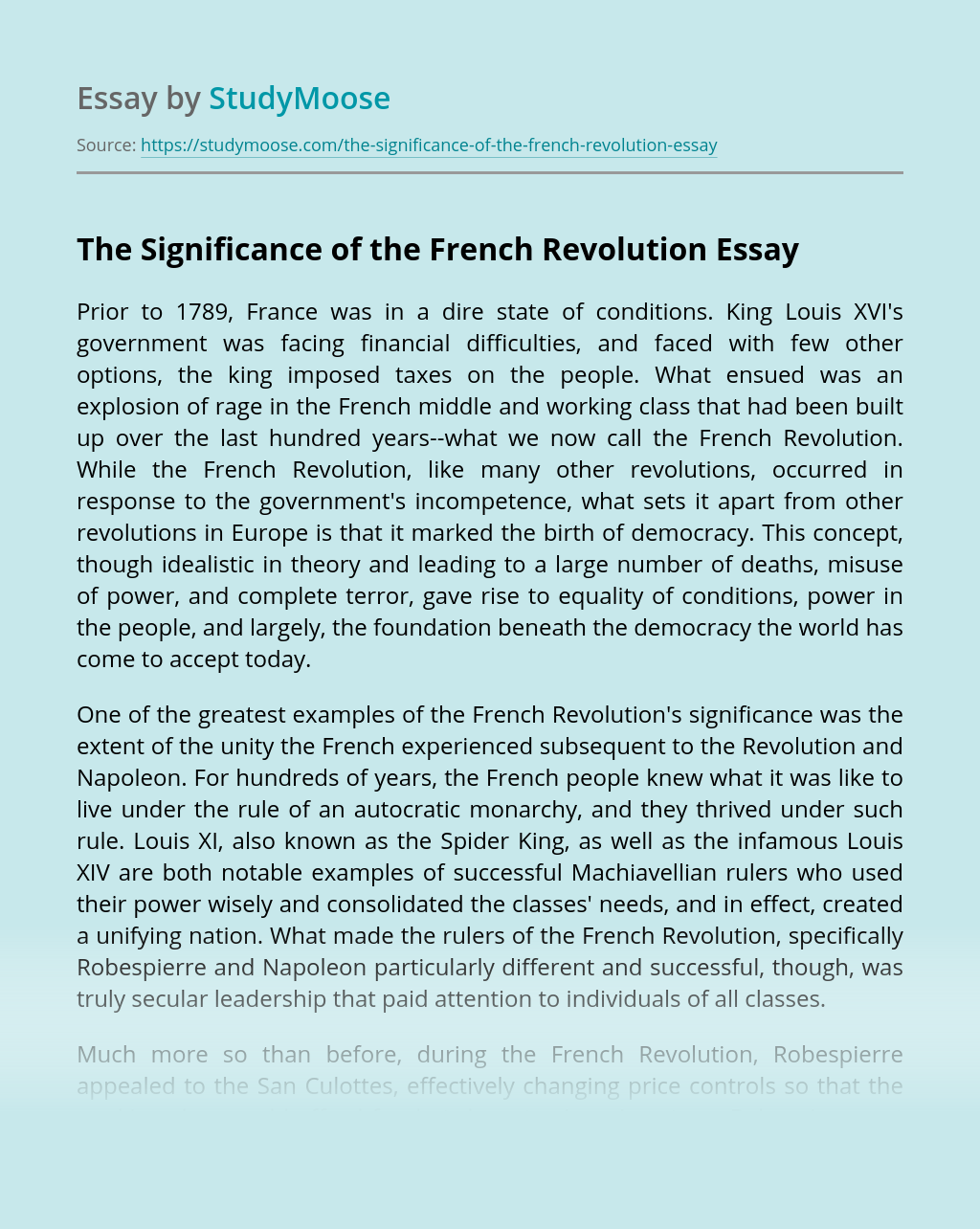 Don’t waste time
Get a verified writer to help you with The Significance of the French Revolution
Hire verified writer
$35.80 for a 2-page paper
Stay Safe, Stay Original