The significance of Garibaldi's contribution

Giuseppe Garibaldi was born in Nice, and, although he was a born a French citizen, he regarded himself as Italian. Despite the pressure placed upon him to enter the Church, he joined the Merchant Navy where a chance meeting with Mazzini altered the entire course of his life.

One of Mazzini’s greatest disciples was Garibaldi, who was inspired with nationalist fervour and patriotic enthusiasm. He quickly converted to share Mazzini’s aim of a united Italy, but only an Italy united as a republic.

Don't use plagiarized sources. Get your custom essay on
“ The significance of Garibaldi’s contribution ”
Get custom paper
NEW! smart matching with writer

A revolutionary plot in 1833 in Piedmont was introduced to cause mutiny in the army but it failed and Garibaldi was sentenced to death. Execution could not be carried out as Garibaldi left the country prior to the trial. He moved to Brazil and then on to Uruguay where his military ability was first displayed. He fought, defending Uruguay in an Austrian take-over, however, news of the Italian revolutions of 1848 reached him and he decided to return to his homeland.

He did this with some out of date weapons and some of his colleagues. Word of his military campaigns in South America had by now reached the Italian States and upon his return, recruits assembled to join Garibaldi’s legion.

Garibaldi’s contribution in South America had a profound effect on events later on in the fight for unification, as it was due to his military involvement that he came back to Italy a prominent figure. It was only due to his reputation that he was able to recruit so many men.

Although Garibaldi was originally drawn to the cause of unification as one of Mazzini’s supporters, he saw the powerful Piedmontese state and monarchy as a more realistic way of achieving unification. It was at this point that Garibaldi and his mentor Mazzini parted ways. Mazzini was only interested in a unified Italy as a republic whereas Garibaldi wanted unification by any means possible. This is also where Garibaldi shows contrasts with Cavour who was above all else Piedmontese.

February 1849 saw the establishment of the Roman Republic. The Republic itself was short-lived; only lasted four months. Garibaldi played a role in resisting the Catholic countries assisting the Pope however, the defenders were greatly outnumbered by the powers helping the Pope and the fall of Rome was inevitable. After the fall of the Republic, Garibaldi made an appeal for new recruits to “fight the war against the stranger”. Although he offered no provisions or promises, almost 5000 men were recruited. Despite this, on their journey to Venetia, 3500 were lost. Garibaldi escaped to Genoa where he was arrested and released on the condition that he leave Italy at once. Upon his release, he travelled to North America where he stayed until 1854.

When he returned, Garibaldi’s significance is clearly visible. A revolt which began in 1860 in Sicily came to the attention of Garibaldi and he set sail for Sicily almost immediately. His unexpected conquests in Sicily and Naples precipitated the unification of most of Italy.

When he reached Sicily, Garibaldi was a welcome fighter. His weak army of 1200 now reaching 3000 took Palermo forcing the garrison to return to Naples making Sicily his. In September 1860 Naples fell leaving Garibaldi as Dictator over the Kingdom of Naples. Cavour feared that Garibaldi would not stop and would attempt to take Rome so he advised Victor Emmanuel to take Rome first. When the two forces met, Garibaldi proclaimed Victor Emmanuel the first “King of Italy” Plebiscites held in the newly acquired land showed immense support for annexation by Piedmont.

In 1861, Garibaldi’s aim of a united Italy came into being; however, it did not include Rome or Venetia. By way of unification under control of Piedmont, the Piedmontese constitution and legal system were extended over the whole country. Though Rome remained to be occupied by France, continuing pressure from Italian liberals came for it to be freed and incorporated into the new Italian Kingdom as the historical capital. Apparently, with the implicit support of Victor Emmanuel, Garibaldi set off with 3000 volunteers to conquer Rome. When Garibaldi reached Palermo, he was greeted by calls of “Rome or death” and suddenly, Victor Emmanuel disowned the march. Garibaldi and his men were shot at by local troops in Calabria and only 500 remained.

The whole operation was a disaster for Garibaldi and an embarrassment for the government. In 1864, the Italian government agreed to protect Rome form attack and to move the Italian capital from Turin to Florence and in return the French withdrew from Rome. Garibaldi saw this as a betrayal of the cause for unification and decided to make an attempt to recapture Rome. Garibaldi and his men began their march to Rome but he was arrested. Despite this his followers continued on their journey to Rome where they suffered defeat at the hands of the Papal army. Garibaldi attempted to re-join his army and did succeed; however, his planned revolution with the Roman people did not happen. This was the end of Garibaldi’s contribution to Italian history.

Garibaldi’s contribution to the cause of Italian unity was considerable. He was a brilliant military leader and was determined to achieve unification. He inspired great enthusiasm in his men and made them feel compelled to devote their lives to the cause of unification. Although he encountered many failures such as his journey to Rome, his followers were loyal and determine to try to continue his efforts.

His greatest achievement would be his success at conquering Naples and Sicily, as this made Unification inevitable however, he was distressed that Rome did not become part of the unified Italy in his lifetime as he believed Italy should be united with Rome as capital.

The significance of Garibaldi's contribution. (2016, Jul 01). Retrieved from https://studymoose.com/the-significance-of-garibaldis-contribution-essay 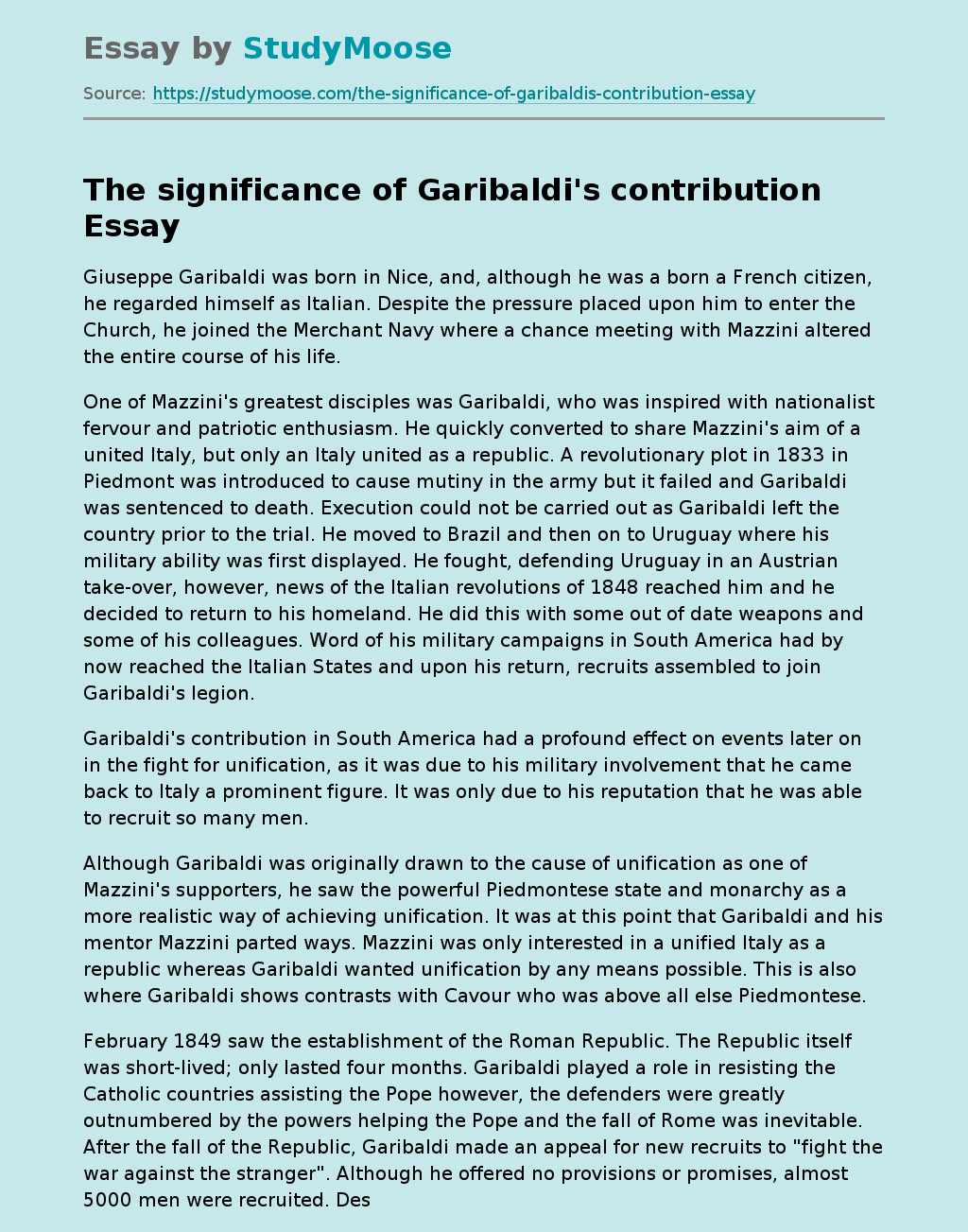