The significance of Brown v. Board of Education of Topeka

The significance of Brown v. Board of Education of Topeka

The class action Brown v. Board of Education is recognized as one of the greatest decision in the twentieth century by the Supreme Court. This court held unanimously that racial discrimination of kids in public schools desecrated the Equal protection clause in the constitution. Even though the decision was not successful in United States in completely desegregating public education, it incited the civil rights movement which was emerging into a popular revolution and also succeeded in putting constitution on the side of the racial equality.

Don't use plagiarized sources. Get your custom essay on
“ The significance of Brown v. Board of Education of Topeka ”
Get custom paper
NEW! smart matching with writer

Many regions of United States had numerous segregated schools in 1954 and this was made legal in plessy v. Ferguson in 1896 where it was held that isolated public facilities were constitutional provided that white and black facilities were “equal” to each other. But, by mid-twentieth century the civil rights groups established political and legal challenges to racial discrimination. In early 1950’s some class lawsuits were initiated as a way of seeking court orders to oblige school districts to allow black students to attend white public schools.

Brown v. Board of education case was one of the class actions which were initiated against the Topeka. In this case Brown argued that Topeka’s racial discrimination violated the clause of equal protection of United States constitution. This decision by the Supreme Court declared discrimination in the educational facilities was unconstitutional. Supreme Court through this decision ended the notion that “separate” could be termed as being “equal” (Retrieved May 5, 2014, from http://www.

How did the Tet Offensive change American public opinion about the war in Vietnam?

The Tet offensive which was televised in the United States nightly surprised a lot of Americans who had the idea previously of United States easily taking care of the enemy. United States forces pushed the Vietnamese forces back where they eventually caused huge casualties on them however the effect of fighting on United States public opinion was very huge(Retrieved May 6, 2014, from http://www.cliffsnotes.com/cliffsnotes/history/how-did-the-tet-offensive-affect-public-opinion-about-the-vietnam-war).

Briefly describe the factors that brought an end to the Cold War.

The cold war came to an end since a reformist faction of the communist party came to power in the USSR with Andropov, and then again with Gorbachev, since the old-guard, and just plain old, soviet leaders kept dying. Gorbachev from a younger generation had a much more critical attitude towards the UUSR and was much more educated, intelligent, worldly and open-minded than any other previous leader who is more than Reagan too. There was, however, one other group responsible for the end of the cold war: the individuals of the USSR and Eastern Europe who protests and organized at great personal risks. Their protests and Gorbachev’s acceptance of their roles brought about the end of the cold war not United States arms deployment which may have delayed the whole process (Retrieved May 6, 2014, from http://wiki.answers.com/Q/What_events_started_and_ended_the_Cold_War?#slide=28).

Briefly describe the reason the Clinton administration embraced NAFTA and the WTO and why the WTO was such a controversial organization.

Clinton’s administration was aimed at curbing international and domestic terrorism. Clinton administration efforts were aimed at rewarding those who worked. WTO is a basic international body which is aimed at assisting in the free trade. Controversy has faced WTO where it has been hijacked through county interests therefore worsening the lot of poor, intense criticism and inviting protest (Retrieved May 6, 2014, from http://www.globalissues.org/article/42/the-wto-and-free-trade).

The significance of Brown v. Board of Education of Topeka. (2015, Oct 21). Retrieved from https://studymoose.com/the-significance-of-brown-v-board-of-education-of-topeka-essay 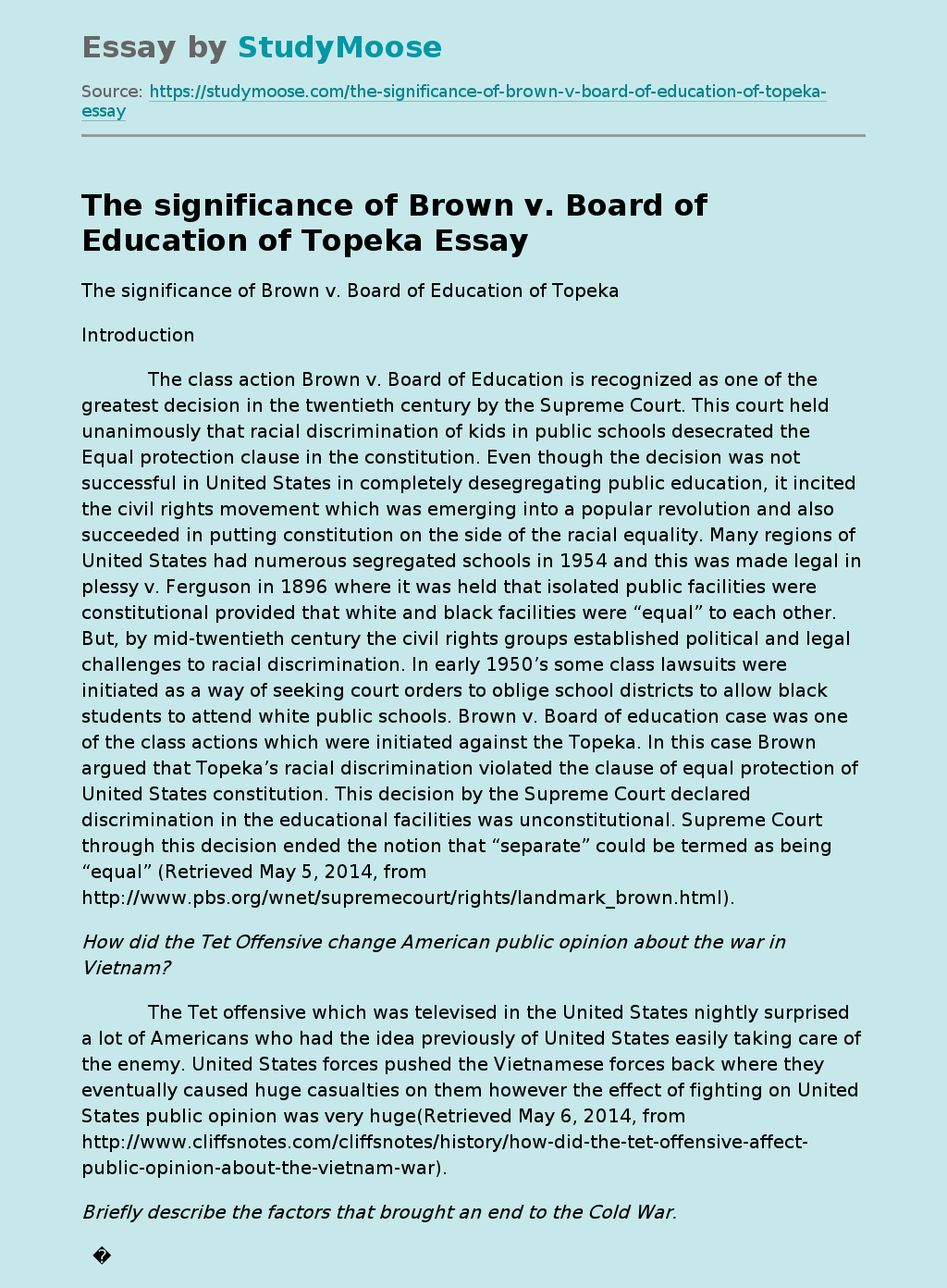