The short stories: “The Kid Nobody Could Handle”

A person’s need for social connection is directly related to their urge to survive. In the short stories: “The Kid Nobody Could Handle” by Kurt Vonnegut, “The Fall of a City” by Alden Nowlan and “The Painted Door” by Sinclair Ross, the protagonists all experience a type of isolation that lead them to bad decisions, emotional scars and change the way they look at criticism. The isolation factor had altered thoughts in their minds and ultimately committed them into decisions that hurt them in the end.

Don't use plagiarized sources.
Get Your Custom Essay on The short stories: “The Kid Nobody Could Handle” Just from $13,9/Page

Sinclair Ross’s “The Painted Door” demonstrates the fact that isolation can make a person make bad choices. When Ann is left alone of the isolated farm, she begins to ponder all the negative thoughts about her husband. Since she feels that she was unable to create that connection with John, this created the gap between them. Ross writes: “sometimes she asks herself, why sit trying with a man who never talked?”(52). When Steven arrives, she felt as if she had broken this seal of isolation; which results in the regretful decision of cheating on her husband.

Moreover, in the story “The Kid Nobody Could Handle”, Jim’s decisions to cause havoc in his school is driven by the loneliness inside of him. He was isolated ever since he was young. As Jim has the misconception that nobody cared about him, he goes to school and makes mistakes that hurt himself and the other around him. Vonnegut writes, “They decided to get him clear of Chicago, so they stuck him with me”, coming from his Uncle, surely he did not like him very much. Isolation is one of the key points in people’s reason in their bad decisions.

Isolation from a person’s family or loved ones can result in permanent emotional scars. Teddy from “The Fall of a City” by Alden Nowlan is a child that was neglected by his Uncle and Aunt. This event leads Teddy into creating his own fantasy utopia with paper boxes and dolls to replace reality. His toys symbolized his childhood. However, when his uncle came and ridiculed his personal world, his dreams were shattered. It is obvious that Teddy was emotionally scarred from this because “he was crying by the time he finished tearing it to shreds”. In addition, John from “The Painted Door” also had a similar experience in his story. When he discovers that Ann was cheating with Steven, he is emotionally shocked. John then froze to death
with a smear of paint from the door on his hand. From the unpleasant shocking surprise, John had suicide in the storm because he was hurt so bad emotionally. Isolation is a feeling that can leave you hurt for a very long time.

Being isolated from your peers can also make a person fear criticism. From the short story “The Fall of a City”, the Uncle laughs as he says: “You’d never believe it, but that great big lummox has been playing with paper dolls!” Teddy takes this criticism extremely personally as he cries to tear down his imaginary city. It is perfectly normal for a boy his age to have creativity and imagination to have fun in his own world. However because of how isolated he is from his uncle and auntie, he cannot help but to take this comment as a mock. Jim, “The Kid Nobody Could Handle” experiences this in his story as well. Jim who has been neglected by other all his life had given up the idea that there are people out there that care about him. The author writes: “No more talk about the poor little sick boy,” said Quinn grimly. “That’s all he’s heard from the social workers and juvenile court, and God knows who all.” This quote is saying how much Jim has been criticized before which lead to the emotional state that he is in today. Loneliness can change a criticism into a harmful blade that cuts deep into your inner self.

Isolation can make people do things they normally wouldn’t, hurt you emotionally and make you fear criticism. “The Painted Door”, “The Kid Nobody Could Handle” and “The Fall of a City” had protagonists who previously had experienced isolation. Isolation is a dangerous topic that nobody should play around with.

The short stories: “The Kid Nobody Could Handle”. (2016, Apr 03). Retrieved from https://studymoose.com/the-short-stories-the-kid-nobody-could-handle-essay 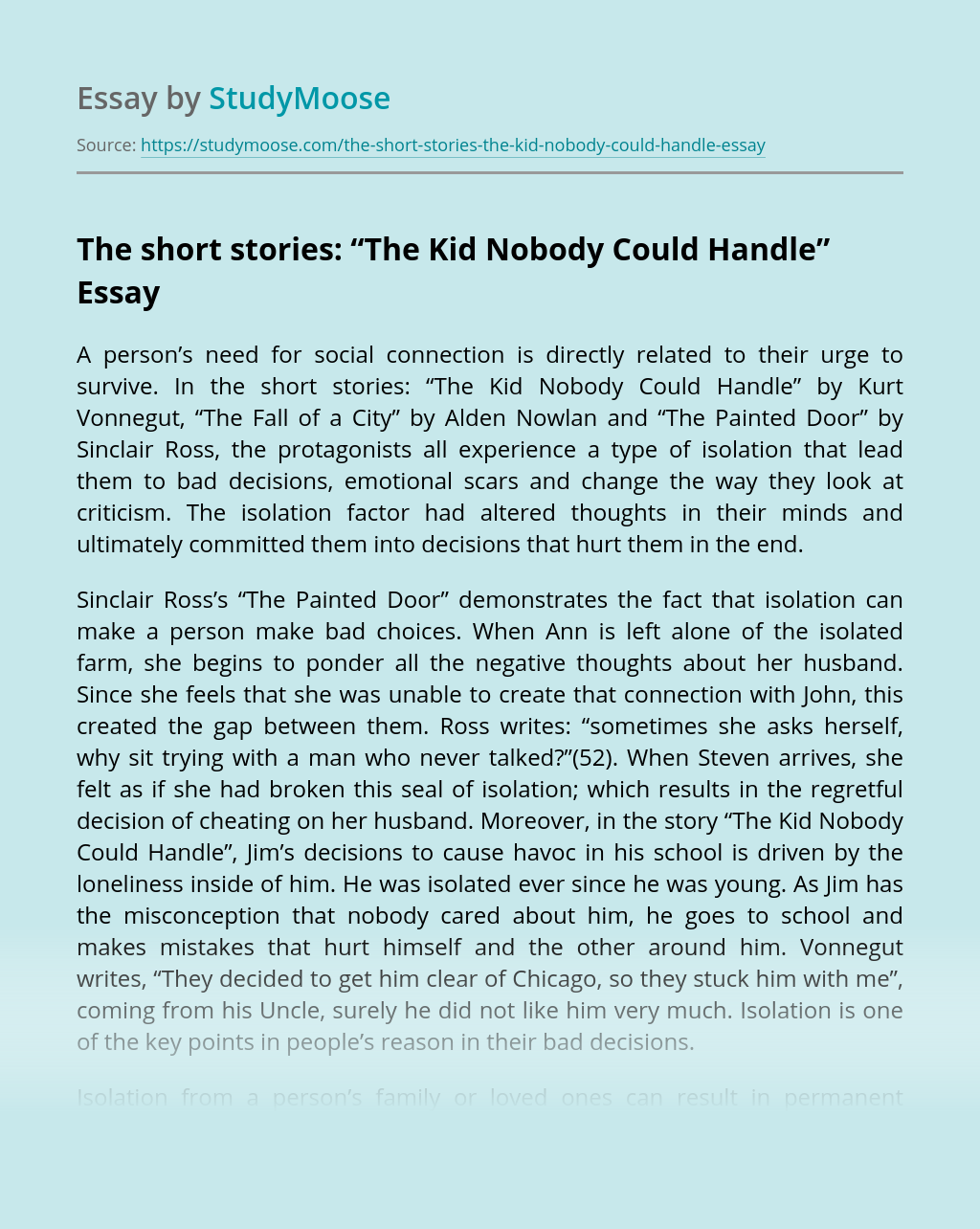 The purpose of this essay is to define empathy and discuss its use on how it is used on a daily basis and what makes people feel empathy for others. Empathy is being able to feel and understand what another person is going through or what they have experienced. Typically, it would be a happiness,...

George Orwell’s 1984 is a novel which describes utter and total hate- hate of those who are different, hate of evil and hate of all other humans. It is where love is described as absurd, and totally unnecessary. People are bred to hate, and hate is the primary emotion that people feel. The lack of...

View sample
Describe physical, intellectual, emotional and social development for each of the life stages of an individual

The eldest of Frank and Isobel Hawking’s four children, Stephen William Hawking was born on the 300th anniversary of the death of Galileo—long a source of pride for the noted physicist—on January 8, 1942. He was born in Oxford, England, into a family of thinkers. His Scottish mother, Isobel Hawking, had earned her way into...

1. Using the full spectrum of segmentation variables, describe how Darden segments and targets the sit-down dining market. The types of segmentation include geographic, demographic, psychographic, and behavioral segmentation. For geographic segmentation, Darden has all of its Longhorn Steakhouse restaurants in the eastern half of the United States but they are trying to expand to...