The infamous movie The Seventh Seal tells a tale of of a knight named Antonius Block and his squire Jons who are returning from the Crusades back to their home country of Sweden, where the black plague has struck. There Block is confronted by Death and convinces him to play a game of chess to delay his death in hopes of doing one meaningful deed before dying. The movie opens up with quotes from The Revelations which informs the audience that religion and the idea of God is involved with the film.

Don't use plagiarized sources. Get your custom essay on
“ The Seventh Seal ”
Get custom paper
NEW! smart matching with writer

Throughout the entire film of The Seventh Seal it is evident that the main issue and theme of the movie is what role God plays in our society and in our hearts. The director does an excellent job of using the movie as an allegory for the different position that God holds for different people. For example, there is Joseph who is completely immersed in the belief of God, then Jons who doesn’t believe in God, and finally Antonius Block who is constantly doubting Gods existence but wants to believe in something.

When determining the exact meaning of the story one must depict and decipher what scenes are significant and symbolic in relation to the theme. In accordance with this would be the scene where Block is drinking the milk and eating strawberries, this is a metaphor for the Eucharist. Block sees how much Joseph and Mary enjoy their meal so and wishes to indulge himself. However, this is the only instance in which Block gets to enjoy their peaceful existence.

Another example of how symbolism is portrayed in this film is by the game of chess that Block plays with Death, which is symbolic in the fact that it shows us that people are always trying to avoid death at all costs no matter what their religious belief. The Seventh Seal in relation to some other famous literature is very similar in a number of different ways.

The Seventh Seal in the idea of plot it is similar to The Odyssey written by Homer. This is because both Odysseus and Block are journeying back from war after a long time and are trying to get back to their women at home. They both endure many struggles on their way home and have to face many moral issues that directly effect their lives. Also, they both display many characteristics that a protagonist have, examples would include intelligence, bravery, and pride. Lastly God or Gods play an important role throughout each of the stories with the presence or the lacking presence of any God.

The movie in another sense has a great comparison to The Confessions, which illustrate the theme similarities in theme between Block and St. Augustine. This is in reference to the point that The Confessions tells about St. Augustine’s inner struggle to find God and the relationship that God has in his life. This connection between the two works is significant because both Block’s and Augustine’s main struggle throughout the whole passage is the what God means to them in their lives and whether or not he exists.

Although, in the end they have different experiences that bring them to different conclusions on their view of God. Augustine eventually comes to the realization that God is in his life and that he does exist. On the other hand Block never comes to that idea of God. This is shown by the fact that Death appears throughout the story, however the presence of God is not there. Also, Block states that even though he did his meaningful act he didn’t feel any different toward his life.

All in all, The Seventh Seal is a unbelievable movie that really makes the audience think about their relationship with God and how horrible death would be if there is no afterlife. People’s perception on whether an afterlife exist also relates to their happiness in life. A great example of this would be in the case of Mary and Joseph who are always in great spirits and have great faith in what they believe. In opposition there is Block who struggles with the idea and may not always show it by his actions but more so in his thoughts. The movie is a great depiction of the fear of God’s nonexistence. Overall it puts great emphasis on God and the different relationships that God has in an individuals life, and it shows that these different beliefs have different effects on that individuals life. 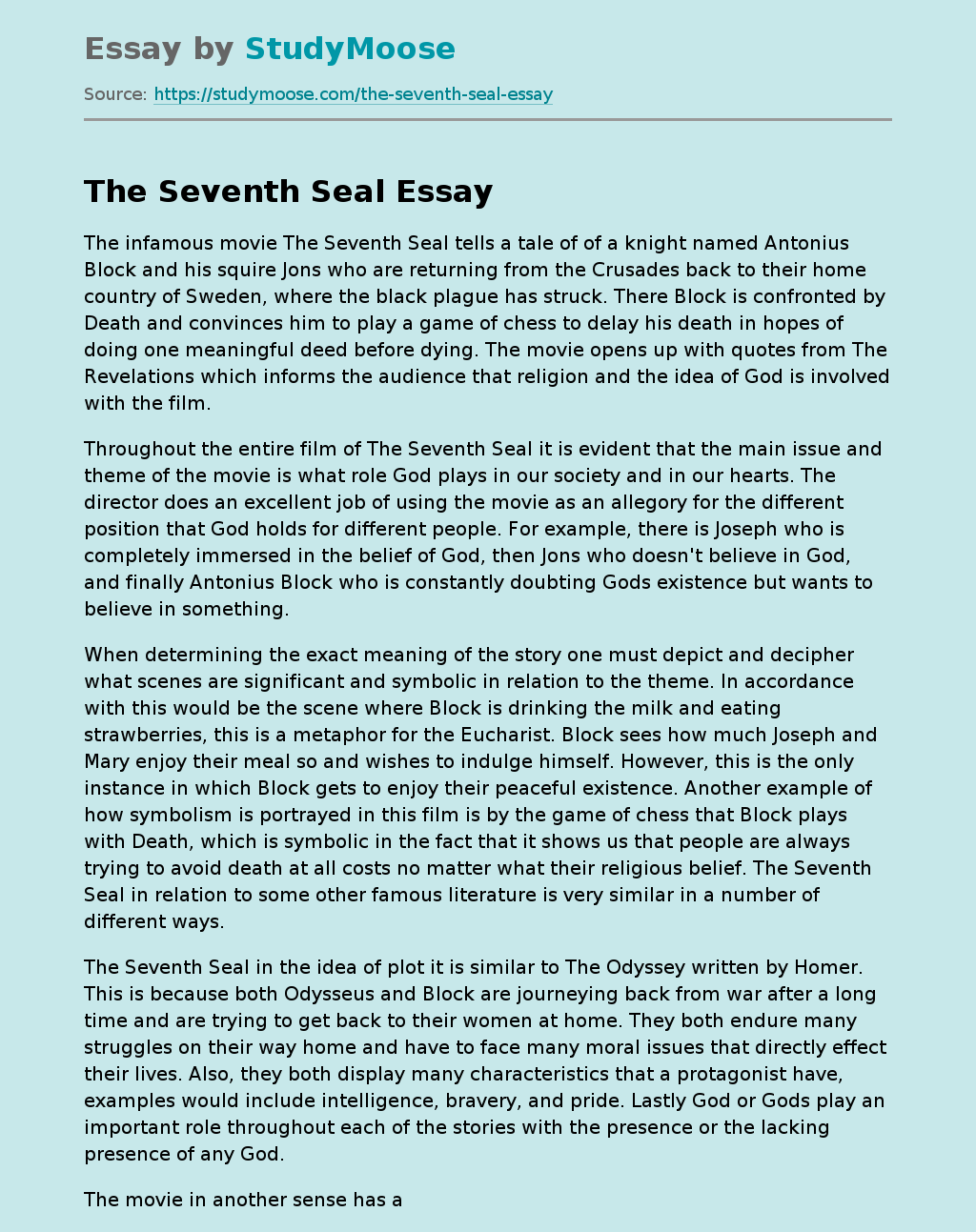