The Secret Life of Bees

Sue Monk Kidd’s novel, The Secret Life of Bees, is greatly influenced by her own personal childhood growing up in a small town known as Sylvester, Georgia. Her environment of life growing up carried much impact on the contents and controversies played throughout her novel. As Sue Monk claims, “My job is to imagine deeply, not recount my history.” She powerfully reveals inspiring divine female power in her famous novel The Secret Life of Bees.

Sue Monk Kidd grew up in Sylvester, Georgia-a small rural town that was a site of intense racial injustices.

Don't use plagiarized sources. Get your custom essay on
“ The Secret Life of Bees ”
Get custom paper
NEW! smart matching with writer

Growing up with continuous racial controversies occurring, Sue clearly injects the intensity of racial segregations in the South into her novel. Growing up, Kidd lived in a a plot a land that was isolated from much of the city, such as Lily Owens.

Throughout living in her childhood home, Kidd listened to the honeybees in the wall of her room. She includes this intriguing detail in her novel as well.

Sue was an intelligent young girl also reflecting back to her character, Lily. Sue was encouraged to pursue life as a writer, but the “cultural climate of the South in 1966” prompted her to achieve a degree in nursing instead.

This background is also displayed in the details of Lily Owens’ life. In The Secret Life of Bees, Miss Owens was given a journal that she often uses to write stories based upon real events she surpasses. This is inspired by the reality that Kidd also lives.

As a kid, Sue Monk was influenced by writings of famous authors such as; Henry David Thoreau’s Walden and Kate Chopin’s The Awakening. These authors caused Kidd to also write spiritual memoirs and novels.

While writing The Secret Life of Bees, Sue intertwines many stories that have actually taken place in her life. For example, Kidd continuously recalled an elderly negro woman in a shoe store, then later writes about Rosaleen’s spitting encounter with the three racists. She also grew up with the pleasure and luxury of having a black nanny herself, then giving Lily Owens a nanny named Rosaleen. Sue Monk Kidd experienced an intimacy with Mary and the empowering bonds between women, which is also expressed throughout her novel. These are just a few of the many factors of relation from Sue Monk Kidd’s childhood to her famous novel, The Secret Life of Bees.

The Secret Life of Bees. (2016, May 29). Retrieved from https://studymoose.com/the-secret-life-of-bees-essay 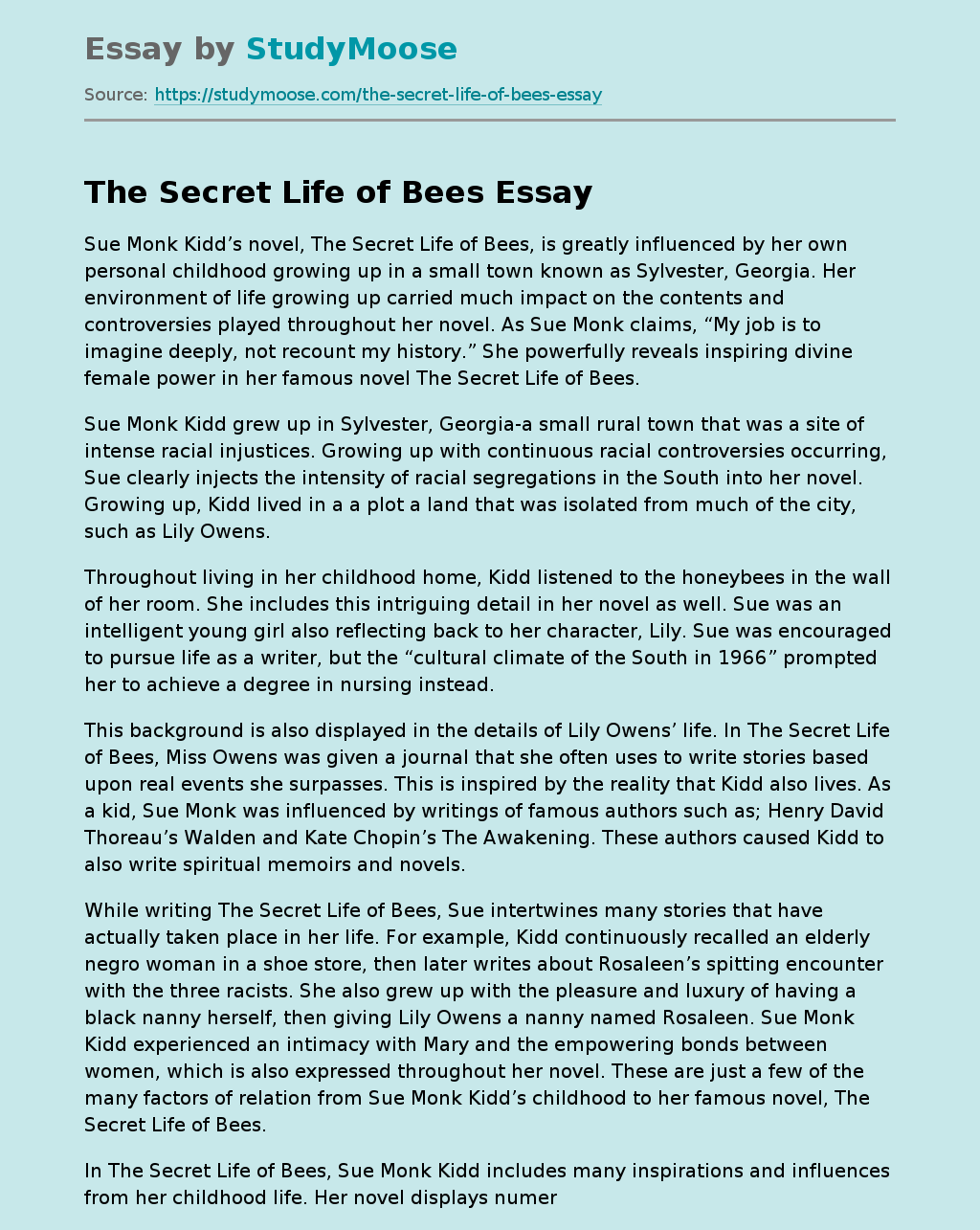