The North West Rebellion was a brief conflict on the Canadian prairies in spring of 1885. But its outcome had a lasting affect on a nation. The man at the centre of uprising – Métis leader Louis Riel – had returned from exile to lead the second uprising in Canadas young history. On March 19, 1885, Riel formed a provisional government and armed force, centred in the small Saskatchewan town of Batoche. The strategy was to gain the Canadian governments attention regarding a list of grievances in the Saskatchewan Valley about land rights and political power.

A week later, about 100 North West Mounted Police and volunteers marched towards Batoche, They intended to intimidate Riel and his supporters; about 1,000 Metis and a few hundred white settlers. Most Métis communities on the prairies did not take part in the North West Rebellion. The police met up with approximately 200 Métis south of the town near a village called Duck Lake.

A Métis and Cree approached the police waving a white blanket.

An armed NWMP interpreter rode out to meet them. The Cree pushed the Mounties rifle away, an action interpreted as an attempt to grab it. Fearing an ambush, the police and volunteers opened fire but were quickly cut down by the Métis and a handful of natives hiding in the bushes. The NWMP were forced to retreat with 10 dead and 13 wounded. Only four Métis and one Indian were killed at Duck Lake. Riel watched the battle on horseback, holding a wooden cross and praying aloud.

He hadn’t planned a fight but interpreted the Métis victory as a sign from God that his cause was just. The Battle of Duck Lake was costly for Riel. He lost the support of most of the white settlers who rejected armed conflict.

Throughout the prairies, the eruption of violence increased the threat of an Indian uprising. Settlers in Edmonton retreated to an old fort fearing 2,000 armed Cree warriors on the nearby reserves. Lovisa McDougal helped other settlers prepare old guns and ammunition at the fort: But the next flashpoint of the Rebellion was at an isolated Saskatchewan settlement called Frog Lake (near present day Lloydminster). On April 2, 1885 Cree warriors rode to Frog Lake to demand food. When the local Indian agent (a non-native government representative) refused to give them food, he was shot. The warriors looted the settlement and murdered nine settlers, including two priests. The murders at Frog Lake grabbed newspaper headlines across the country. Although Riel did not have firm support among the prairie natives, the massacre sent a strong message to Ottawa.

Prime Minister Macdonald sought to pacify some native bands with increased food rations. In response, the powerful Blackfoot leader Crowfoot pledged to avoid the conflict. A full-scale Indian uprising was averted. Macdonald also mobilized a militia and used the fledgling railway to quickly transport troops west. The quick mobilization of federal troops marked the beginning of the end of the Rebellion. About 800 men, lead by General Frederick Middleton, began a long march to Batoche, the centre of the rebel forces.

Despite their small numbers, the Metis put up a fierce resistance during the Rebellion lead by Gabriel Dumont, a brilliant military leader. He employed guerrilla warfare tactics throughout the conflict, demoralizing the government troops with quick strikes. But eventually the numbers played against the Métis. On May 9th, Middletons troops attacked about 350 Métis at Batoche. The Métis put up a fierce struggle. Riel walked among his troops holding a crucifix and yelling “Fire, in the name of the Father! Fire, in the name of the Son! Fire in the name of the Holy Ghost!” Finally the Métis were overwhelmed. Dumont escaped to the States. On May 15, Riel was found by two scouts and surrendered. 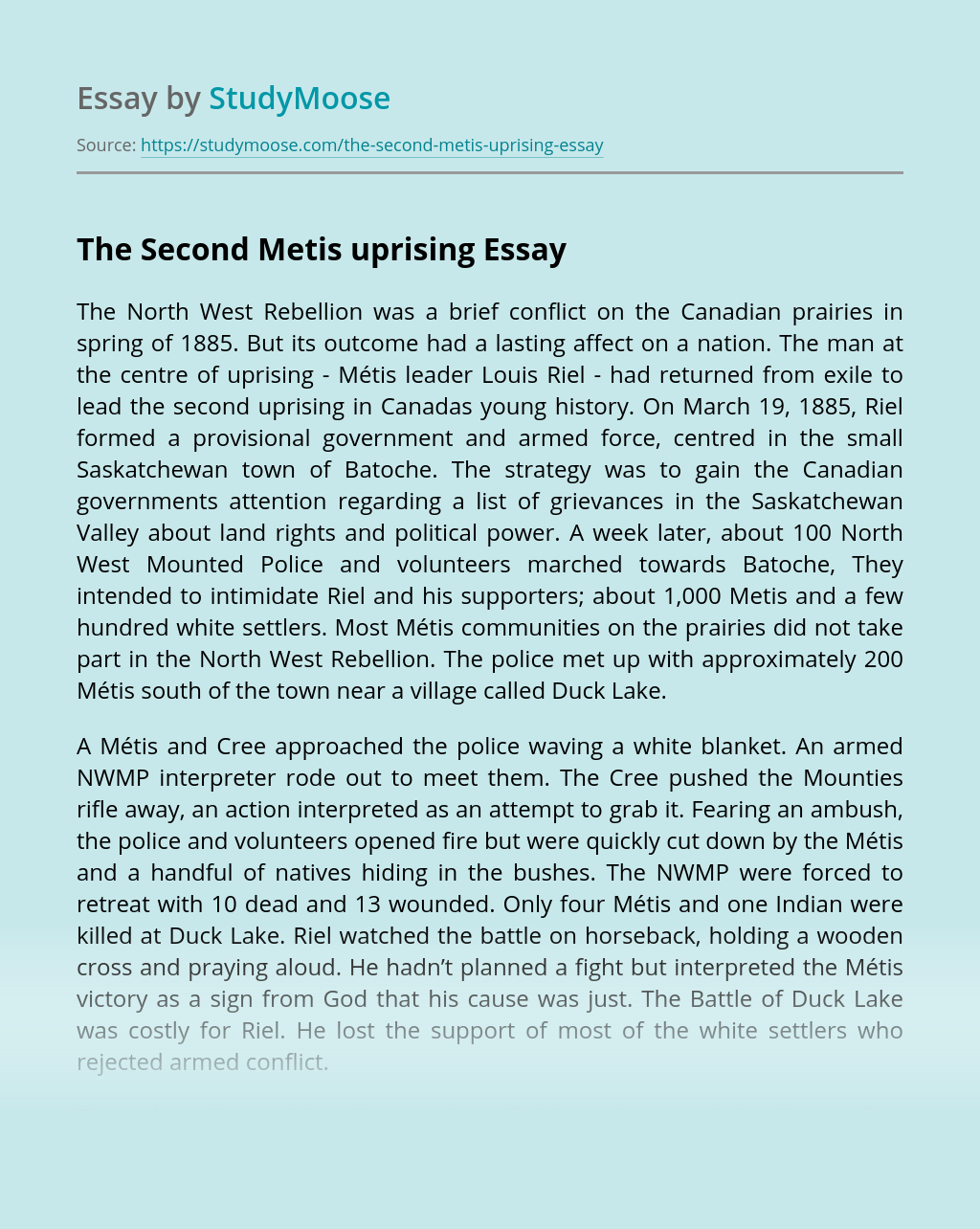 Don’t waste time
Get a verified expert to help you with The Second Metis Uprising
Hire verified expert
$35.80 for a 2-page paper
Stay Safe, Stay Original