The second industrial revolution of the late nineteenth century

The industrial revolution of 17th and 18th centuries saw the transformation of Britain from a Neolithic nation into an industrious nation.

Don't use plagiarized sources. Get your custom essay on
“ The second industrial revolution of the late nineteenth century ”
Get custom paper
NEW! smart matching with writer

However, this spread quickly throughout the world, introducing the modernisation of agriculture, revolution in power and manufacturing of textile. This revolution brought an enormous wave of success in both economic and technical advancement. The first revolution largely focused on the production of new textiles machinery, improved methods of coal production, iron manufacturing and agricultural techniques. However, by the second industrial revolution, a clustering of industrial inventions centering on steel, railroad and agricultural machinery, thus, a big boom on the industry and economy.

The revolution of the 18th and 19th century saw an immense transformation in science, technology and our economy, hence, the transformation from a Neolithic economy to an industrial economy. The revolution impacted on the social-economic in terms of the industrial research and development. Before the revolution labour was manly manual force however, the first revolution saw the materlisation of machines. For examples, the introduction of steam engines provided powered energy used in replacement of manual labour, therefore resulting in the utmost impact of the First revolution.

The industrial Research and Development led to creation of new services, that is, problems affecting daily life such as communication, health and transportation. Consequently, it encouraged people to compete in the market, hence, new industrial upsurge.

The First industrial revolution which occurred in Britain evolved out of the wealth of the country and progressively spread throughout Europe. The economic development which England encountered in the first revolution was distinctively higher than the other Europe countries. The adoption of new technology embarked for example, the seed drill of the 1700 led to the development in rolling mill and steam hammer, which helped in the saving of time and labour. The beneficial of England location meant that her coal and iron existed in same region. (Deane 1969, p. 38-39). The discovery of iron and steel played an important role prior to the first revolution, however, the revolution saw the emergence of more specialized working patterns with better skills and less time spent in apprenticeship.

The revolution introduced in the 18th century saw the introduction of certain development. These inventions included technologies such as machines driven by steam engines and introduction of iron ore fired by coal furnaces. Nevertheless, the discovering of industries within the period was motivated by the realisation of the potentials of wind and hydro energy, most of the early factories like textiles and metal forging industries were introduced tapping into these sources. This period saw the sporadic growth of entrepreneurs like John Wilkinson, who invented “a rolling mill and a steam lathe” (Heilbroner and Milberg 2009, p. 62). The development of good and reliable road and rail network as well as navigable canals from 1773 onwards saw the rapid increase in the movement of manufactured goods and services, for example, in 1750; canals and rivers were 1,000 miles of inland navigation however this increased to 4,250 miles by the 1850. (Whitehead 2010).

The mid-18th and 19th centuries saw the dawn of the second industrial revolution which was characterised by rise in factory and improvement of technology .The period 1859-1872 was described as one of the most successful and solid in invocations in history. Technological advancement led to new inventions leading to rapid modernisation, for instance, water and steam were substituted for electricity and oil. As a result of these advances, machinery led to mass production. Furthermore, Factories are now able to work round the clock as there was power to run the machines and provide light. It was in this regard that the inventions after 1870 were different from the ones that preceded it. (Bronwyn and Rosenberg 2010). It is to be emphasised that the discovery of Electricity paved the way for new machines to be developed also, the use of communication developed with the emergences of electricity. For example, the event of Krakatoa 1883 spread quickly due to the invention of electric telegraph by Charles Wheatstone in 1837, this was in contrast to the earthquake of 1755 in Indonesia which got to Britain 7months later.

Improvement in science was also significant feature in this area, thus, the second revolution saw an evolving scientifically based industry, which helped in chemicals, explosives and ammunition development. Several other chemical compounds were discovered for instance Michael Faraday and James Clerk Maxwell were the leading team in the discovering of electromagnetic force field theory emphasising the explicit use of scientific knowledge. (Auerbach 2013) Rubber cements and petrol became available. Gasoline discovery meant that transportation was more effective with the use of petrol engines as oppose to steam engines. Not only did the introduction of petrol engines made transportation more faster, it also helped with the development of the aircraft engine which meant that transportation of good was efficient. The medical science developed rapidly in 1850s various vaccines were discovered and x-ray facilities were made available to doctors which created a more efficient way of diagnosing illness. For instance, the 1919 influenza epidermis saw the development of anti-flu vaccines which made a remarkable milestone in the development of drugs. Prior to this discoverer it was common knowledge for people to blame certain aliment and natural occurrences as a punishment on God for sins committed e.g. 1755 Lisbon earthquake in Portugal. (Auerbach 2013)

The remarkable element of changes in industrial revolution was the sharp increase in output of the newly technologically advanced industries. In 1701, the importation of raw cotton for spinning weight 1 million, however, a drastic increase by 1781 was 5million. Likewise textile technology by 1784 it was over 11million pound, nonetheless a massive increase by 1799 to 43million. (Hammond and Hammond 1937, p 162).

The first industrial revolution emerged with small scale of industry which was managed mainly by the owners. Consequently, Workers and owners had good relationships, but productivity was low. However, the second revolution emerged with big factories; consequently there was more competition between firms and general exploitation of the workforce to achieve high productivity level. Another feature of the second industrial revolution was the specialisation of the workforce. This involved certain area of the production process been spilt and run by specialised workforce. This created more productivity and better skilled workforce. For example, Adam smith pin factory had no machines as he thought that for the factory system to be more productive, people needs to specialise in what they do best, therefore produce what they are best in doing. In contrast, Karl Mark emphasised on the factory as a way for increasing the exploitation of labour for examples, through enclosure movement. Even so, labour was in poor position and people made to work long hours with very low payment

The second industrial revolution of the late nineteenth century. (2016, Mar 06). Retrieved from http://studymoose.com/the-second-industrial-revolution-of-the-late-nineteenth-century-essay 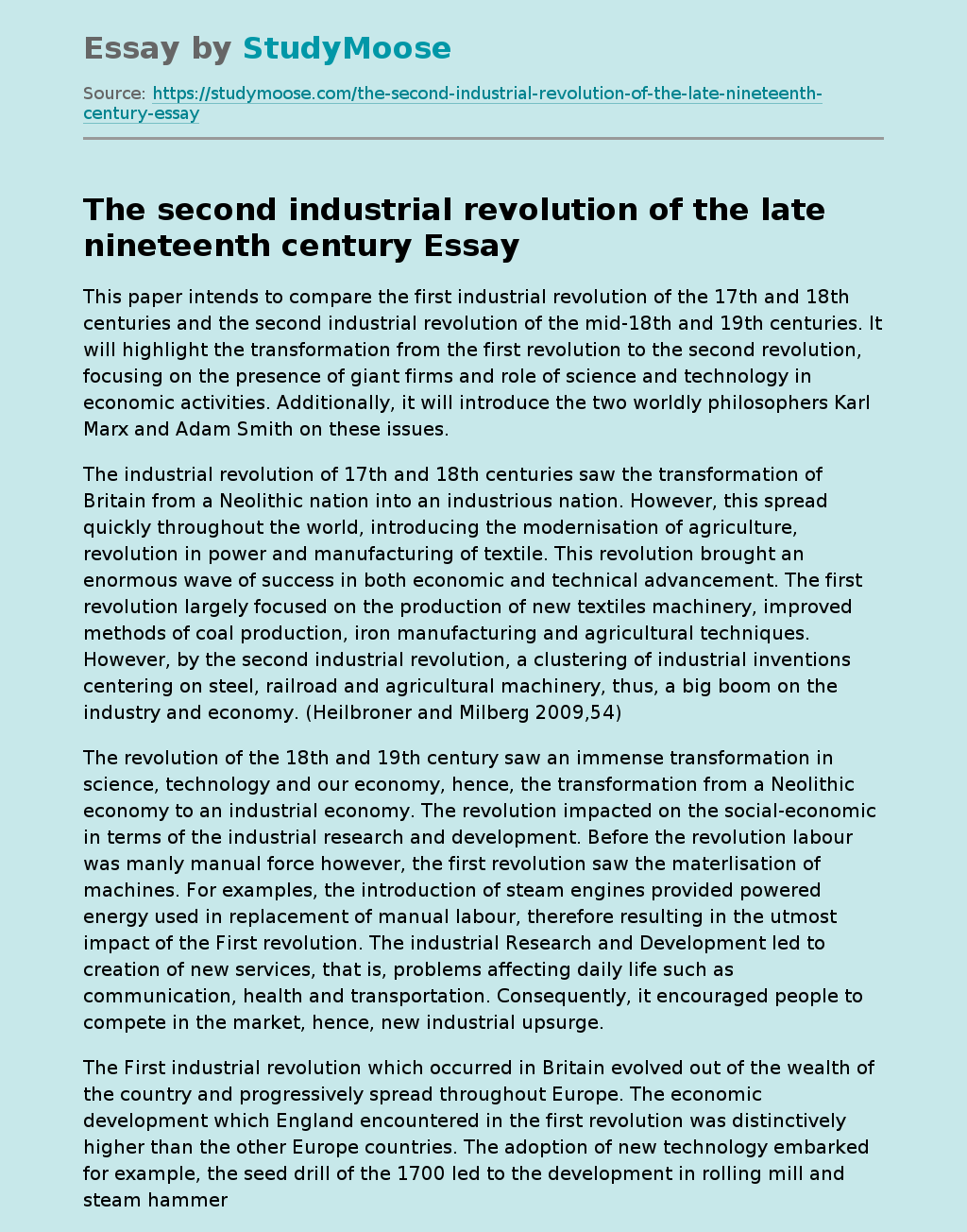