The Second Amendment & the Right to Bear Arms

Americans have had the second amendment rights since 1791, when the bill of rights was established CITE.

Don't use plagiarized sources. Get your custom essay on
“ The Second Amendment & the Right to Bear Arms ”
Get custom paper
NEW! smart matching with writer

The second amendment provides Americas the right to bear arms. Firearms have been around since 1364 CITE, when the first recorded use of a gun was used and has been expanding with more people owning guns every day CITE. There are many reasons to own a firearm, from using it for self-defense. Most Americans own firearms to protect their family and property. State laws vary on use of force laws, but home owner have the right to protect their home and family.

Firearms are very useful and have saved many lives. The sad fact is that even though they can be used for good things, people have also found many ways to use this great invention to be harmful to people and property. Ever since guns were invented, they have been used against people and caused injuries. The right of free speech, the right to defend oneself, the right to go freely about one’s business without harassment, the right freely to associate, and the right to private property and due process, were all considered so obvious that many during the ratification process of the Constitution thought them unnecessary to enumerate CITE

Today, some people still must rely on firearms because they may live where Trophy hunting is the selective hunting of wild game for human recreation.

The trophy is the animal or part of the animal kept, and usually displayed, to represent the success of the hunt. The primary game sought is usually the oldest and most mature animal from a given population. This is typically a male with the largest body size or largest antlers or horns. However, hunting is activity that can be used as family bond time. Some family enjoy hunting wild turkey and deer.

Guns do not kill people, people kill people. Guns are not the problem today. Criminals will kill regardless of gun banning. Before guns were created, people were killing people. Yes, a gun is a deadly weapon and yes people are killed from gun related incidents every day, but guns do not have the ability to harm anyone on their own. It is true that some of the largest mass murders have been shootings. Many tragedies have occurred because of one person with a gun (Refuting). However, those murderers would not have been stopped if a good guy with a gun didn’t stop them.

The right of free speech, the right to defend oneself, the right to go freely about one’s business without harassment, the right freely to associate, and the right to private property and due process, were all considered so obvious that many during the ratification process of the Constitution thought them unnecessary to enumerate CITE. However, scholars insisted that those rights, so obvious to all at the time as to be self-evident, should be explicitly listed in the Bill of Rights so that there could be no ambiguity CITE. President Obama is one to push for gun control. Although he is trying to protect Americans from guns, he is constantly being protected from a team of agents who are armed with firearms.

The Second Amendment & the Right to Bear Arms. (2020, Nov 17). Retrieved from http://studymoose.com/the-second-amendment-the-right-to-bear-arms-essay 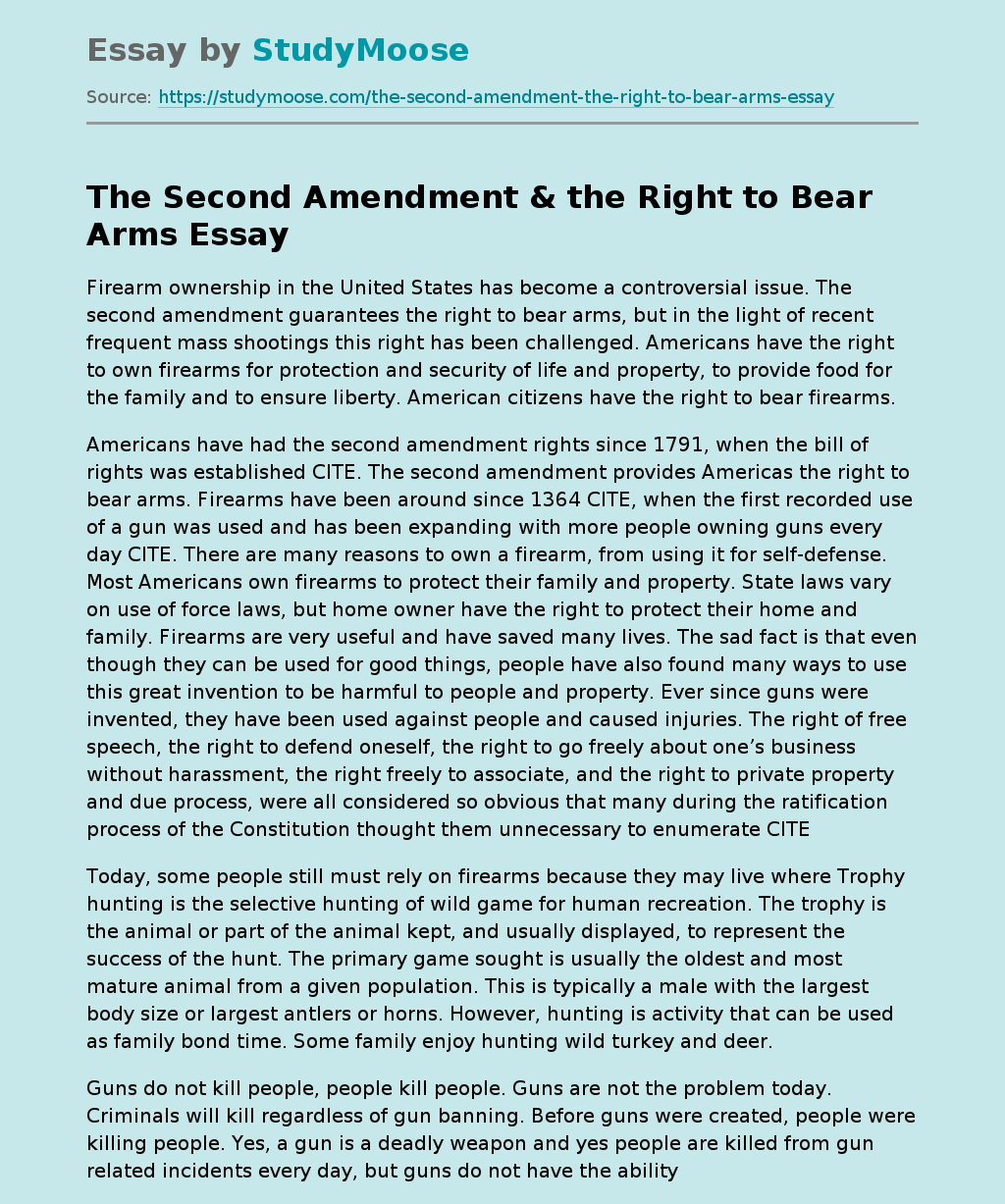