The novel, The Scarlet letter, can be described as both a psychological romance as well as a historical novel. This story takes place on a puritan settlement in 17th century Boston. At this time, Puritans believed in living by the bible and that God drew the soul of man to salvation. They also viewed nature as “evil” or “corrupt”. On the contrary, Transcendentalist/Romantics rejected Puritan religious attitudes and admired nature. They also believed in a higher knowledge than that achieved by human reason as well as saw a direct connection between the universe and mankind.

Turn in your highest-quality paper
Get a qualified writer to help you with
“ The Scarlet Letter – Elements of Dark Romanticism ”
Get high-quality paper
NEW! AI matching with writer

For those reasons, I believe The Scarlet Letter is a perfect example of the Dark Romanticism/Transcendentalism genre. These characteristics are shown throughout the novel in the actions of our characters as well as the dialogue within the story. “… had so early borne the black flower of civilised society, a prison. But, on one side of the portal, and rooted almost at the threshold, was a wild rose bush, covered, in this month of June, with its delicate gems… “(pgs.

41-42) In this quote, the black flower and the prison represents Puritan society, with its moral rules of conduct.

The rose bush symbolizes the individual, standing defiantly on their own in spite of the society against them, much like Hester and Pearl. The rosebush also shows that there may be a human impulse that cannot be destroyed, but can survive in people despite social order. This characteristic of depending on nature for knowledge is greatly favored among romantic/transcendental genres.

“Dost thou think I have been to the forest so many times, and have yet no skill to judge who else has been there? Yea; though no leaf of the wild garlands, which they wore while they danced, be left in their hair!

I know thee, Hester; for I behold the token… “(pg. 189) this is another sign of nature for knowledge. The “witch”, Mistress Hibbons relied on nature for her wisdom, which was a “sin” among the Puritan people. Rejection of Puritan beliefs was also common among the romantics and transcendentalist. “The child’s attire, on the other hand, was distinguished by a fanciful, or, we may rather say, a fantastic ingenuity… “(pg. 68), this shows that characteristic. Puritans did not really value color and fancy clothing. However, Hester dresses her beautiful Pearl in very bright colors.

Hawthorne knows this is not favorable among the Puritans in the settlement but he gives these actions to Hester to show that transcendental trait. The reader can also pick up on this at the dwelling of Governor Bellingham, “… the walls being overspread with a kind of stucco, in which fragments of broken glass were plentifully intermixed; so that, when the sunlight fell … it glittered and sparkled as if diamonds had been flung against it … “(pg. 83) which was very uncommon in a Puritan settlement. “Mother,” said little Pearl, “the sunshine does not love you. It runs away and hides itself, because it is afraid of something on your bosom.

. . . It will not flee from me, for I wear nothing on my bosom yet! ”(pg. 144) Favoring child innocence was another major romantic/transcendental characteristic that was shown in The Scarlet Letter. Pearl notices things that others do not see, and because she is only a child, sometimes she does not understand everything she sees. However, here she connects the scarlet letter to the missing sunshine (happiness) in her mother’s life. With her childish mentality, she also looks at her mother as the example of every adult so she thinks she too will wear the scarlet letter when she gets older.

Dark Romanticism and Transcendentalism were both very present in The Scarlet Letter. Many characteristics such as child innocence and admiration for nature that the transcendentalist or romantic favored were shown or represented throughout the novel. The story also focused a lot on the individual and showed how no matter how hard one tries, you cannot hide your sin nor who you really are so be true to yourself. I strongly believe that The Scarlet Letter is a great example of the Dark Romanticism/Transcendentalism genre. 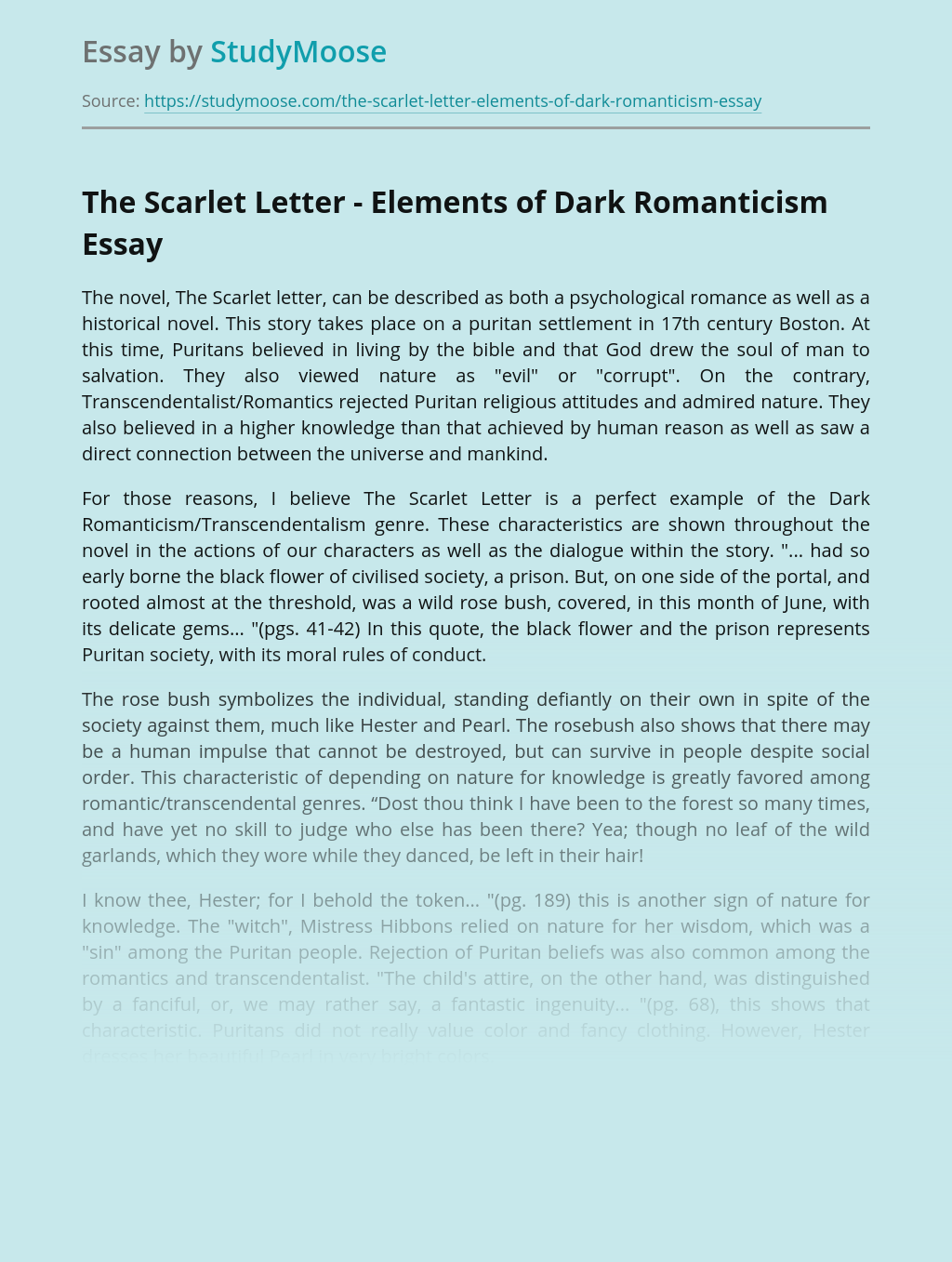 Turn in your highest-quality paper
Get a qualified writer to help you with
“ The Scarlet Letter – Elements of Dark Romanticism ”
Get high-quality paper
Helping students since 2015
Stay Safe, Stay Original