1. As the story opens a throng is gathered. Who are these people? Where and why are they gathered?

Men with beards in sad-colored garments and crowned hats, there are also a few women. They are citizens and they are gathered outside, around the marketplace, to view Hester Prynne on a platform, with her scarlet letter.

2. The description in Chapter One of the people’s dress, the prison, and the surrounding vegetation serves to establish certain important impressions of Puritan society at the time of the story.

Don't use plagiarized sources.
Get Your Custom Essay on ﻿“The Scarlet Letter” Chapters 1-3 Review Just from $13,9/Page

What impressions of this society do you get from the opening chapter?

It can be inferred that the timeline is in the seventeenth century due to the description of the area and the way it is referenced, such as the “market place.” I feel that the community is very strict Puritan. As it was mentioned in the Hawthorne biography lecture, his writing was influenced by a strict Puritan background.

Puritans took sin very seriously, which included being very strict with punishments. In the first chapter, the details of Hester’s punishment are not in vivid detail; however, her sin is not just taken with a “grain of salt,” so to say, because she is put on display in front of the entire community.

3. The story itself begins with the punishment of Hester Prynne.

a. What early hints do you get in Chapter Two about the nature of her crime? A group of women are discussing Hester at the market-place and the women agreed that the women who are mature and good church members should be allowed to deal with such “malefactresses as this Hester Prynne.” The women also refer to Hester as a “hussy.” It is also mentioned that Dimmesdale is upset about such a scandal. One woman suggests that Hester should be branded upon her forehead and another woman declares that Hester has “brought shame upon us all, and ought to die.”

The women’s remarks suggest that “Mistress Prynne” has committed a woman’s crime, one that brings them all shame. So, from the language of the group of women and the terms “mistress” and “scandal,” it can best be inferred that she committed a crime that looks bad amongst women and her being referred to as a mistress (one who partakes in sexual acts without relationship bounds) gives hints to her crime.

b. What more definite information about her crime do you get in Chapter Three? While standing on the platform, Hester recognizes a man in the crowd who is accompanied by an Indian. This man inquires about her and why she is there. This is where we learn that she has committed adultery (the scarlet letter “A” is for adultery).

4. What two punishments have been assigned to Hester Prynne?

One is that her sin ousts her from society. The other is that she must wear an “A,” the scarlet letter, especially for public humiliation, which marks that she committed adultery.

5. Standing on the scaffold, Hester envisions her earlier life. What facts do you learn about her previous life? What was her relationship with the man “well stricken in years”?

We learn that she grew up in England, and her house, which was a decayed, poverty-stricken house of gray stone. Her mother had passed away and it was inferred that she also left her home to go to a city because she imagines a continental city with narrow streets, huge cathedrals; and ancient public buildings. While mentioning the city, the book also mentions the man “well stricken in his years.” It is said that she imagines a man whose years had worn on him, his right shoulder a bit deformed because the left shoulder is higher, the weary face and bleary eyes of a scholar who had read many books. In the third chapter, Hester sees a man in the crowd that matches the description of her imagination and he immediately catches her gaze. It is later revealed in the chapter that the man is her husband.

6. One man in the surrounding crowd is singled out. He is described as “clad in a strange disarray of civilized and savage costume.” a. What effect does
his presence have on Hester?  Her intensive awareness of the public’s attention was relieved when she saw an Indian with a white man in the crowd. It is said that when Hester saw the man, she clutched her baby to her chest so hard that it cried; however, she did not even realize or hear her baby cry. She could not stop staring at him. b. What is the significance of his laying his finger on his lips when Hester fastens her eyes on him? He had noticed that she was watching him and she must’ve been confused by his presence. When he caught her gaze, he pressed his finger to his lips to signal to her to not say a word. c. What clues are there to his identity?

When Hester was on the scaffold imagining her past, she imagined a man with deformed shoulders, his left shoulder higher than his right, she imagined a weary face and bleary ices with a penetrating power. The first clue is when Hester first sees the man and she notices his “intelligence” features, she also notices his shoulders and more into the details, it is revealed through the expressive descriptions of his eyes and his gaze that the man she sees in the crowd is the man she imagined.

7. While on the scaffold, Hester is subjected to a kind of interrogation. a. What important question related to her crime remains unanswered? Who the father of Hester’s baby is/who tempted Hester.

b. What plea do the two ministers make in regard to this question? To reveal the man who is the baby’s father/tempted Hester into adultery.

c. Who else besides the 2 clergymen questions her in this matter? It was Governor Bellingham.
d. What is Hester’s response?
That her child must seek a heavenly father, for her child will never have an earthly one.

8. Based on the reading you have done in these chapters, do you have a theory about the answer to the question which the ministers have put to Hester? If you do, explain what you have noticed in your reading that might support your theory.

During the questioning, Dimmesdale has a much stronger plea than Mr. Wilson, but prior to his questioning, he takes a moment to say a silent prayer, which Mr. Wilson did not, which gives a bit of a suspicion. Dimmesdale’s voice trembles and is quite broken when he speaks to Hester; he even mentions that even if the man who tempted her had to step down from his position of high power/authority, that it would be better than living a life of sin.

When Mr. Wilson asked Hester to speak, her gaze never broke Dimmesdale, especially with she said that she would never tell. “She will not speak!,” murmured Dimmesdale, as he was leaning over the balcony with his hand over his heart as he had waited to see how Hester would respond.

From Dimmesdale’s strong plea, his emotions and actions during the plea, and the way he reacts when Hester is asked to speak gives off hints that there may be a connection between Hester and Dimmesdale.

﻿“The Scarlet Letter” Chapters 1-3 Review. (2016, May 28). Retrieved from https://studymoose.com/the-scarlet-letter-chapters-1-3-review-essay 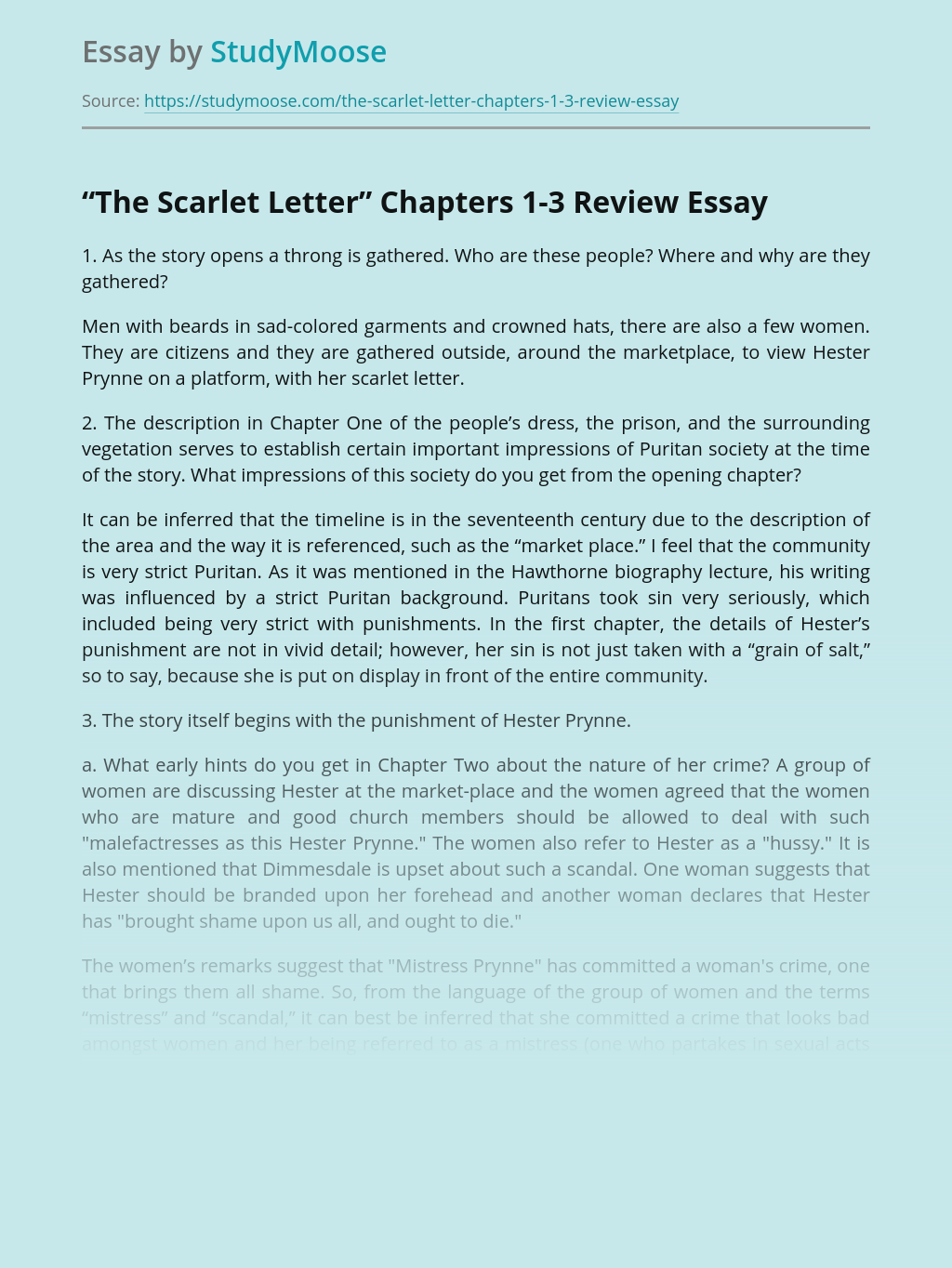 Rhetorical Analysis on the Scarlet Letter

Rate this post Hawthorne effectively depicts the usage of prolonged metaphors, foreshadowing and language throughout the Scarlet Letter to easily get hold or comprehend the reader’s mindful minds. To start with the usage of the extended metaphors-the lengthening of the average metaphor was developed in this passage to completely describe Pearls response to Reverend Dimmesdale’s...

Rate this post Journal 1: In the introduction, we learn about the nameless narrator who is the chief executive officer of the Salem Custom House. Since there are barely any ships that comes to Salem, the narrator spends his time trying to amuse himself. One rainy day he stumbles upon a pile of documents and...

Get Essay
The scarlet letter

Rate this post The Puritan Society is an important part of American history, it outlines America’s brief moment of theocracy and extreme social order. The Scarlet Letter, written by Nathaniel Hawthorne, depicts Boston, Massachusetts during the time of puritanism and follows a young woman, Hester Prynne, through her trials and tribulations under her sin. The...

Protofeminism in The Scarlet Letter

Rate this post Mother, said little Pearl, the sunshine does not love you. It runs away and hides itself, because it is afraid of something on your bosom. In Nathaniel Hawthornes The Scarlet Letter, Hester Prynne has committed the sin of adultery and wears a scarlet A on her chest to condemn her. Hawthorne develops...

Guilt and Innocence in ''The Scarlet Letter''

Rate this post Pearl is an ironic and contradictory symbolism of pure and gracefulness. It is ironic that she is the child born to two great sinners. The way Hawthorn creates Pearl is by combining great contradictions together. Pearl is a misbehaving and mischievous child always showered by praise and wrapped with great angelical beauty....

Hawthorne's The Scarlet Letter words is communicated by the

Rate this post Hawthorne’s The Scarlet Letter words is communicated by the symbols. Even more, all though The House of the Seven Gables he used similar images in the Pynchon women, he explored a forerunner who communicates with future generations through symbols. Alice Pynchon, Phoebe’s great, great, great-aunt, reveals the necessity of an inventive sensibility...