The Scarlet Letter as a Story of Crime and Punishment

The Scarlet Letter is an exemplification of the theme of Crimeand Punsihment. It is mainly the story of Crime, say sexual crim, and the consequences arising therefrom. The act of adulteyr is certainly a crime against the individual, be that individual, the wronged wife or a hsuband. Similarly it is also a crime against society, for it involves that violation of a moral code formulated and honored by that society. Adultery has been branded as immoral in all civilized communities of the world.

Don't use plagiarized sources. Get your custom essay on
“ The Scarlet Letter as a Story of Crime and Punishment ”
Get custom paper
NEW! smart matching with writer

By indulging in it Hester and Dimmesdale have violated the sanctity of the Seventh Commandment “Thou shalt not commit Adultery”. The sinners have to pay a heavy price of their sinful acts.

By her heinous crime, Hester wronged her husband beyond reconciliation. She accepts it in Chapter VI when Chillingworth calls on her as a physician. But this is a crime on a personal level. What is significant much more is that she by her action, has flouted teh social code of conduct and the moral foundations of a Puritan community.

The community has prescribed a punishment no less than a death on the criminal. Whether Hester feels it or not, she cant shake off her moral obligations. The punishment or Hester is not so heavy as generally it used to be.

It was motivated to make the sinner realize his or her crime, but Hester grows defiant to society as the time passes on. It is therefore natural, that the attitude of the people of Boston should stiffent towards her.

Hawthorne tells that Hester sees group pf matrons, rigid and stern in their attitude towards her, in the midst of the Procession, but she does not see the only young who sympathized her by kind looks.

Upto the death of Dimmesdale, Hester is not penitent in the true sense of the term. The forest scene, which precedes the minister’s death-scene, makes it quite obvious that she is not meant for austerity or discipline. She is, therefore, punished immediately for her plan of flight from Boston, along with her lover. She manages to get berths reserved in the ship, but the shipmaster informs her that Chillingworth is also to go in the same ship. Evidently her plan is shattered. Her seriosu crime enjoins a severe punishment upon her.

As regards Dimmesdale’s crime, it is certainly of the same nature as that of Heste. But his punishment is surely more severe than that of Hester. His is inner punishment as against the outer punishment of Hester. He suffers deep down in his heart. He is a greater sinner than Hester. First, against the purity of his profession; secondly, he tries to conceal his crime from the public. He adds hypocricy to his sin. Butthough hypocrisy can save him from social dishonour into which he is afraidhe might fall after the exposure of his crime, it is helpless in remedying his spriritual hurts.

Dimmesdale’s conscience allows him no rest; it is rather a source of his constant trouble. He can’t sleep soundly; he can’t sit or study peacefully in his room; he burns midnight oil over writing sermons; he keeps fasts and vigils; he scourges himself when he is all alone. But all these dont afford him real peace. He surrenders to a second ‘fall’ when he accepts Hester’s proposition of flight. But all the same, he keeps awake throughout the night in writing the Election sermon to delivered on the Sabbath Day. He takes the opportunity, by way of his self imposed punishment, to make a confession of his crime and thereby to disburden his sinking soul.

When he does so in that face of the crowd, he gets immediate relief, but just then his failing breath gives way to death. He dies on the scaffold. This is the climax of the punishment, though its is also the climax of his spiritual growth. This shows no matter who the person is and of which profession he belongs to whether rich or poor he or she has to pay and suffer for his/her sins and hence they never go scot free whether in private or public eye.

The Scarlet Letter as a Story of Crime and Punishment. (2016, Jun 04). Retrieved from http://studymoose.com/the-scarlet-letter-as-a-story-of-crime-and-punishment-essay 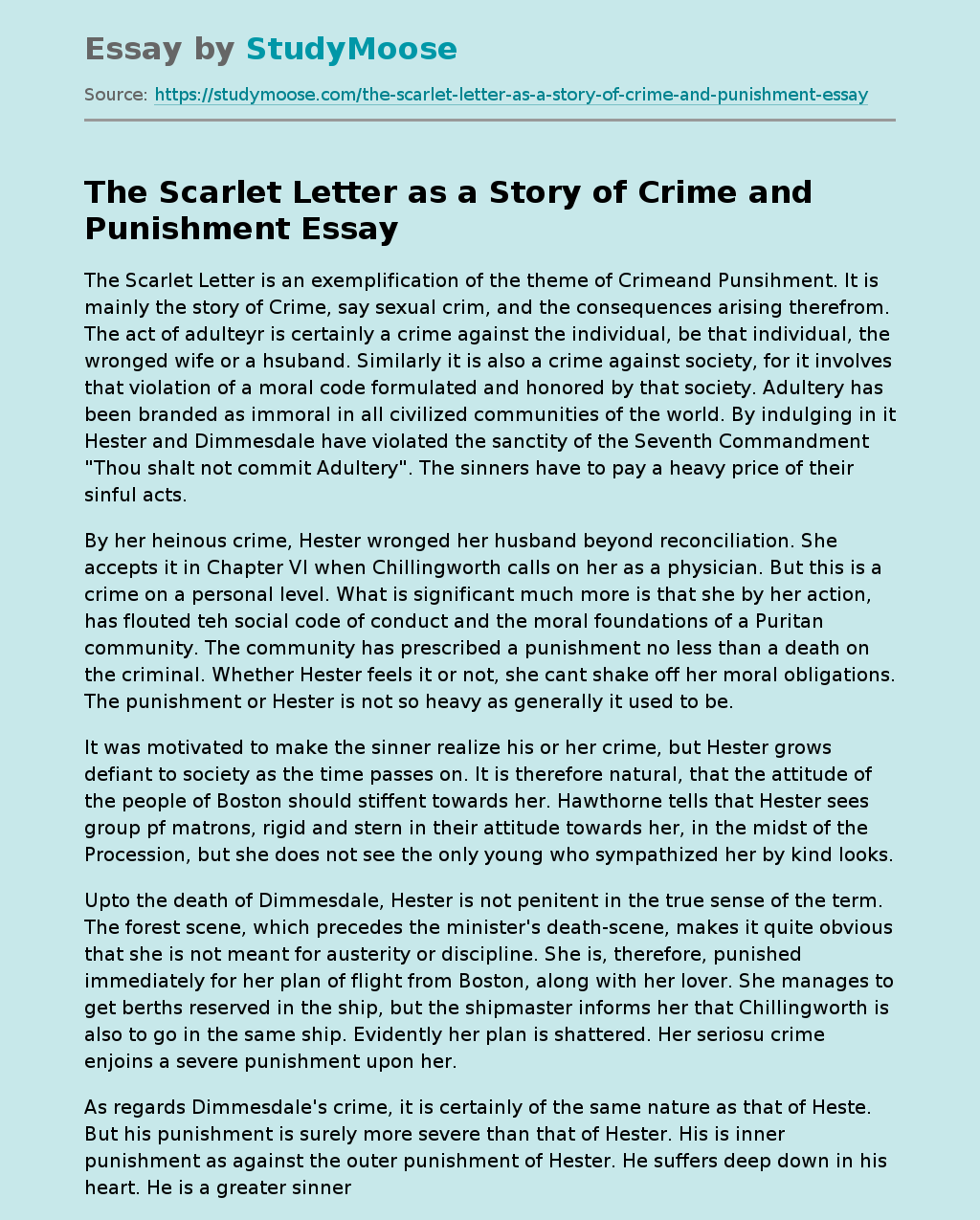