The year is 1692 and Bridget Bishop is arrested for what the townspeople of Salem, Massachusetts believes is witchcraft. She is found guilty on June 2nd and is hanged publicly on June 10th, making her the first victim of The Salem Witch Trials executions. Throughout the next year, 19 more people will be convicted and executed making that a total of 20 people executed for witchcraft in one year alone and in a little over 2 years more than 200 people will be accused. But what led the people of Salem to believe these people were witches? Was it poison from the crops, an autoimmune disorder, or mental disorders? Was it people defying Puritan standards or was it actually witchcraft?

While all played a role in the belief of witches, only a few have proof to explain what actually led to the mass hysteria in 1692.

Don't use plagiarized sources. Get your custom essay on
“ The Salem Witch Trials and Anti-NMDAR Encephalitis ”
Get custom paper
NEW! smart matching with writer

It’s important to consider the time and the Puritan society that lived in Salem, Massachusetts. Puritans were the religious separatists who left England to the colonies in hope of religious freedom from the Protestant Church of England and Puritans were the majority population of Plymouth County.

Part of their belief was the idea that Satan was everywhere: outsiders, the wilderness, other religions. Dancing, celebrating holidays, and playing music or games were banned, as they were thought to be of Pagan origin and would lead to Satanic temptation. They also thought women were the prime source of all problems on Earth, as cited from the story of Adam and Eve in which Eve in tempted by Satan and introduces sin to the world.

At the time of the infamous witch hunt, these beliefs hadn’t changed much as Puritans had only emigrated 50-60 years prior, so when the first North American witch scares spread in the 1620s Puritan communities were quick to rise with paranoia and take legal action.

With the strict Puritan standards and the intensity of Satanic temptation it’s easy to see why symptoms of different disorders and diseases easily frightened the community and were mistaken for bewitchment. It began in Salem Village when two girls, Betty Parris and Abigail Williams, age nine and eleven, began suffering fits of screaming and thrashing around their rooms, throwing objects, crawling and writhing in contortions. They often complained of feeling someone pricking and pinching their flesh and seeing dark figures watch and hover over them. Seeing as the medical knowledge was poor at the time, they were unable to pinpoint any medical cause for their behaviors and quickly sought out supernatural causes. Next, not too long after, two other girls, Ann Putnam Jr. and Mary Walcott, ages 12 and 7, started exhibiting similar fits, notably during church services. These were cases with medically explainable symptoms, but the three women initially accused Sarah Good (1653-1692), Sarah Osborne (1643-1692), and Tituba (1653-1720), were victims of the witch hunts because they were deemed “outcasts” and “behaved outrageously”. With this being said, it’s not likely all the victims suffered of the same thing. Some may have been infected with disease, lived with a disorder such as schizophrenia or psychosis, or were wrongfully judged and accused. To begin trying to decipher what caused the townspeople to believe what was happening to these victims was possession, we must piece together the given behaviors and symptoms recorded from eye witness accounts.

Researchers have done just that and came up with multiple theories. The first theory is ergot poisoning. Ergot poisoning is brought on by rye fungus which had infected many of the crops at the time. The symptoms of ergot poisoning include: muscle spasms, hallucinations, and seizures. All of which the first four girls suffered from but, some of these have been dismissed as the girls were missing clear symptoms of ergot poisoning, like gastrointestinal complaints, a livid skin color, and ravenous appetites. It’s important to note the hallucinations caused by ergot poisoning are similar to those of LSD (rainbows, halos, etc.), not clear figures. Though it’s very possible that some victims suffered ergot poisoning, it still doesn’t explain multiple symptoms of the four girls who invoked the hysteria. It wasn’t until a little after 2007 that a very plausible explanation for the girls’ behaviors was discovered.

Anti-NMDAR encephalitis is an auto-immune disorder where antibodies bind with the NMDA receptor within the surface of the brain and brings the receptor to hypofunction, in other words, the immune system attacks the brain causing inflammation in one side of the organ. One case that we can compare to the Salem girls’ symptoms is the case of Susannah Cahalan. She suffered anti-NMDAR encephalitis for a month before being diagnosed with the disorder by Dr. Souhel Najjar. She was wrongfully diagnosed with bipolar disorder, schizophrenia and psychosis before Dr.Najjar asked her to do one simple test, draw a twelve hour clock face. She drew the clock and handed back the paper, but all 12 numbers were on the right side, meaning the right side of her brain was inflamed or “on fire”. After a brain biopsy doctors were able to accurately diagnose Cahalan with anti-NMDAR encephalitis.

The symptoms not only Cahalan suffered, but all those diagnosed with the disorder, are incredibly similar to those of the Salem Witch Trials victims. Here’s how someone inflicted with the disorder behaves: first they will suffer from extreme paranoia or anxiety. Then they will develop flu-like symptoms which will then continue into bizarre and disturbing behaviors. 10 to 20 days later the patient will begin to suffer from movement disorder. They can write in contortions, unable to control their movements, twitch in the face or be unable to react or move quickly. Along with these symptoms the patient’s blood pressure will vary along with their heart rate and body temperature. Patients will then become catatonic (state of immobilization) and may be unable to register any emotions.

Finally, if untreated, the patient will fall into comatose and ultimately death. Comparing recorded accounts of the girls’ behaviors and correlating them to anti-NMDAR encephalitis symptoms we can see clear signs of the disorder as seen in the chart below.  If they were suffering from anti-NMDAR encephalitis it could explain why women and children were the majority accused. Anti-NMDAR encephalitis has been increasingly found in children and is often an encephalitis brought on by an abnormal reaction to an ovarian teratoma, a germ cell tumor found on the female reproductive organ. One of the four girls thought to have been affected by the encephalitis, Betty Paris eventually recovered but never issued an apology for her behavior. She could’ve felt the need to not apologize, but she might’ve not been able to recall her time of suffering as patients who are diagnosed with anti-NMDAR encephalitis will not remember anything from the time they developed symptoms. It is unlikely all the accused or victims suffered from the autoimmune disorder as it is not contagious, it is possible for the first four accused could’ve been afflicted with the disorder. 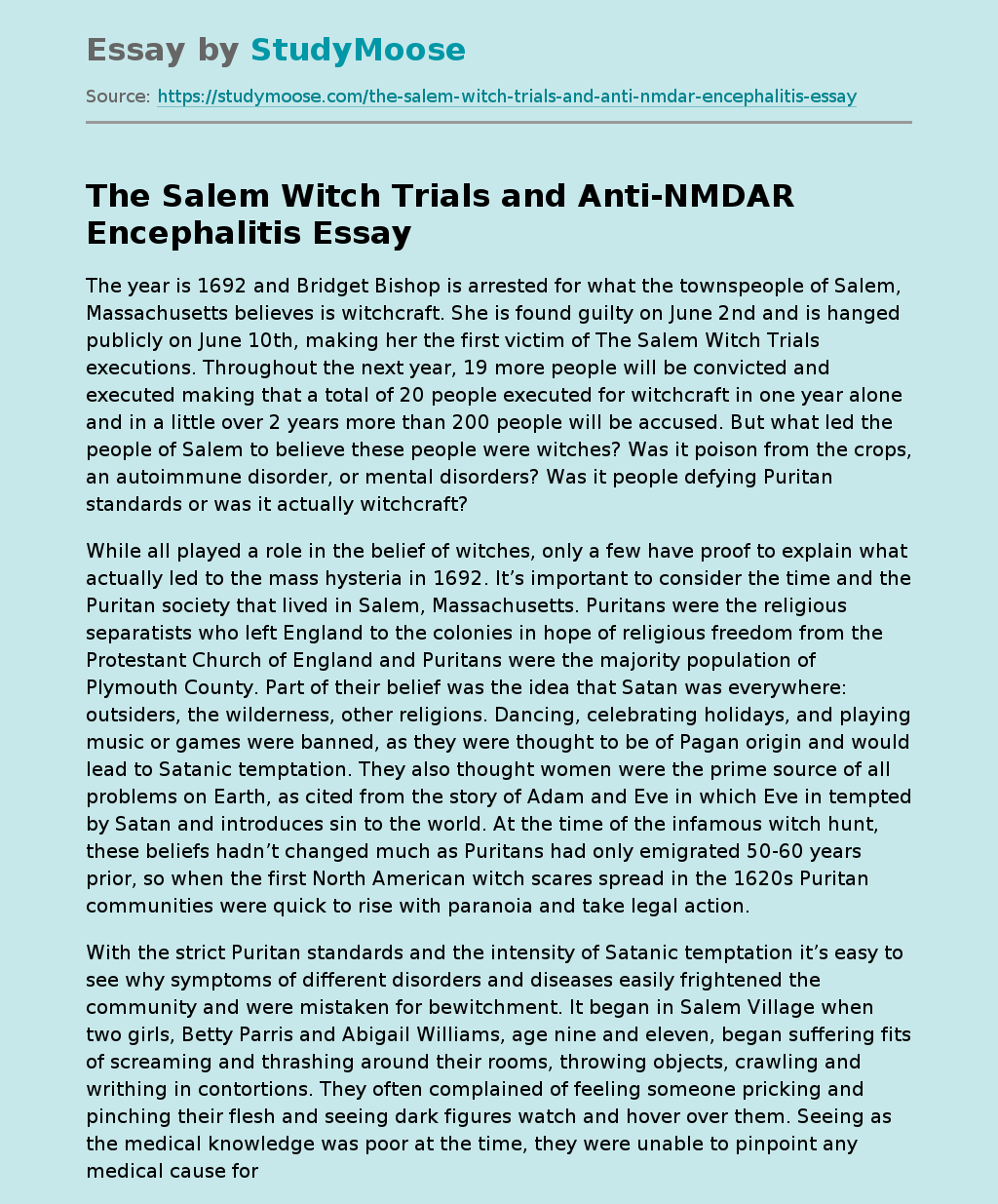