The Fall of the Roman Empire could be linked to many different aspects:army,citizens,barbarianism. Personally I think that all these reasons are linked and headed by the decline of the Roman emperor. The deficient Emperor role led to the lacking military response to invasions,civil war and peasant uprisings.

Roman empire and its emperor

Ever since the adoptive system which was installed by Marcus Aurelius was never reinstalled after his death,effective leadership in governing Rome was lacking.

Don't use plagiarized sources. Get your custom essay on
“ The Roman Empire ”
Get custom paper
NEW! smart matching with writer

It was clearly visible that the Roman Emperor was the backbone of Roman stability and therefore the strength of the Roman army was also crucial in ensuing the empire’s stability. But this stability was drastically altered when corruption and “necessary” errors were committed.

The Roman Empire was plunged into military anarchy and raided by barbarous Germanic tribes causing a major burden from an economic standpoint. Emperors, feeling pressure from all directions, resorted to manners which depleted army and citizen moral.

The personal dreams of empirical leaders was never capable of re-stabilizing the Empire after the invasions. For instance, Constantine created a “substantial field force where he recruited many regiments from Germany. He greatly increased the German generals” (1). “Aurelius also introduced the German element into the Empire. He established a precedent for settling Germanic peoples, barbarians to the Romans, in Roman territory to try secure peace”(2). He felt the only way to preserve the Empire was to host all those who wished to live within its territory.

These German units under Roman commanders did not easily fall to the traditional Roman discipline and command.

The reluctance to submit to Roman rule allowed Rome to lose the tactical superiority that it once had and enjoyed over the German barbarians. This loss of tactical supremacy destroyed the elite, disregarding their once owned power and thus causing change on top of the Roman Empire elite. According to Andre Piganiol,”The destruction of the elite handed over power to a new oligarchy of the newly wealthy and of high officials who came from barbarous elements of the population”(3). Piganiol continues to state that”conquered nationalities had in no way lost consciousness of their origin and many were the means of resistance to the unifying will of Rome”(4) Economically wise, the war against the Germans led to terrible financial burdens on the Empire. “To obtain funds for the military, emperors confiscated goods, exacted forced labor, and debased the coinage by minting more currency without an increase in the supply of precious metal.”(5) Through this the citizens withdrew their loyalty to Rome which deeply affected the middle class.

In the Piganiol essay, Piganiol clearly emphasis the fact that the “Roman state went bankrupt in the third century because it was incapable of continuing to pay its officials and it was incapable of paying its armies without recourse to confiscations,monetary falsifications requisition in kind, unpaid services.”(6) Another major move the emperor and his empire introduced the citizens of Rome involved the citizenship issue. In approximately 212 AD, recruits had been picked from among provincials, who were attracted by the promise of free citizenship and its advantages. “With citizenship no longer necessary for enlistment, the poor, weak class of the empire were drawn to the army because of the weapons and artillery”(7). Personally I think that the major reasons why loser class societies were drawn to the artillery aspect of the army was so they could steal the empires wealth. This behavior would probably lead to the destruction of Roman cities, and destruction of farmlands and economic trade. Civil war also played a negative role in the Fall of the Roman Empire. This was made possible when emperors became afraid of their own troops and the possible rebellion against them. Therefore the emperors to remain on their throne were sometimes obliged to buy the emperor powers from soldiers and other militia men. The lack of conventional loyalty and honor towards the emperor led to a character change in the Roman soldier.

Roman soldiers before and after

Before the Civil War the Roman soldier was considered as probably the greatest fighting force in all of the Western World. During the Pax Romana period, the Roman soldier used his superior organization and training to conquer nations. He was extremely disciplined and professional. He and his army were literally the wall which protected Rome. Their fighting willpower would allow them to remain on the battlefield no matter what and how long battles were needed for victory. “They would join the army at the age of eighteen. Their recruitment was localized and usually hereditary. They were not allowed to marry while on service. Their employment included police duties, checking and rounding up local raiders.”(8) “The army had two purposes, first to fight wars of conquest and satisfy the emperors desires for glory, booty, and expanded territory. Second, to suppress the unrest in outlying provinces.”(9)

But all this seemed to be changing later on in the empire with the emperors change in attitude and the allowing of barbarous German tribes into the army. Emperors resorted first to the population of the barbarous regions of the empire regions, then to foreign barbarians. In the reserve army, the highest regarded men were the barbarians units. These officers occupied the highest ranks up to that of master of the militia. With all the favoritism toward the German unit the Roman soldiers began to feel inferior and secondary in their role of defending the empire.

The military commanders began to use their military troops to cease the thrown and its governing power. They began “neglecting its duty of defending its borders and disrupted the eternal life of the Empire.”(10) Although they continued to fight in well framed units, their overall will to train and discipline required for fighting was almost unnoticeable. Emperors continued to play a negative role in the allotment of foreigners to take control. In Piganiol’s essay he mentions that the, “emperors disarmed the citizens and trusted the defense of the empire to mercenaries.”(11) Valens was a clear example of the corruption in the higher class of the empire. He was active in suppressing the lives of officers, whereby he defrauded men of their portions, clothes and military equipment. Favoritism towards the barbarian units of the army, corruption towards the state and its people, gives ample reason why such a revolt in the Roman army occurred. Towards the end of the empire the Roman army’s qualities deteriorated.

The legions failed to defend borders, the army began to consist predominately of the peasants (citizenship issue). The change in the soldiers attitude explains in the lack of loyalty to Rome and the lack of leadership in military leaders. In conclusion, the Roman army defeated itself. It began as a powerhouse but by some uncontrollable and ignorant errors it collapsed. It was violated internally by the emperors and their soldiers and externally by the barbarous tribes. The lack of soldier loyalty to Rome, began with the lack of Rome loyalty towards soldiers. 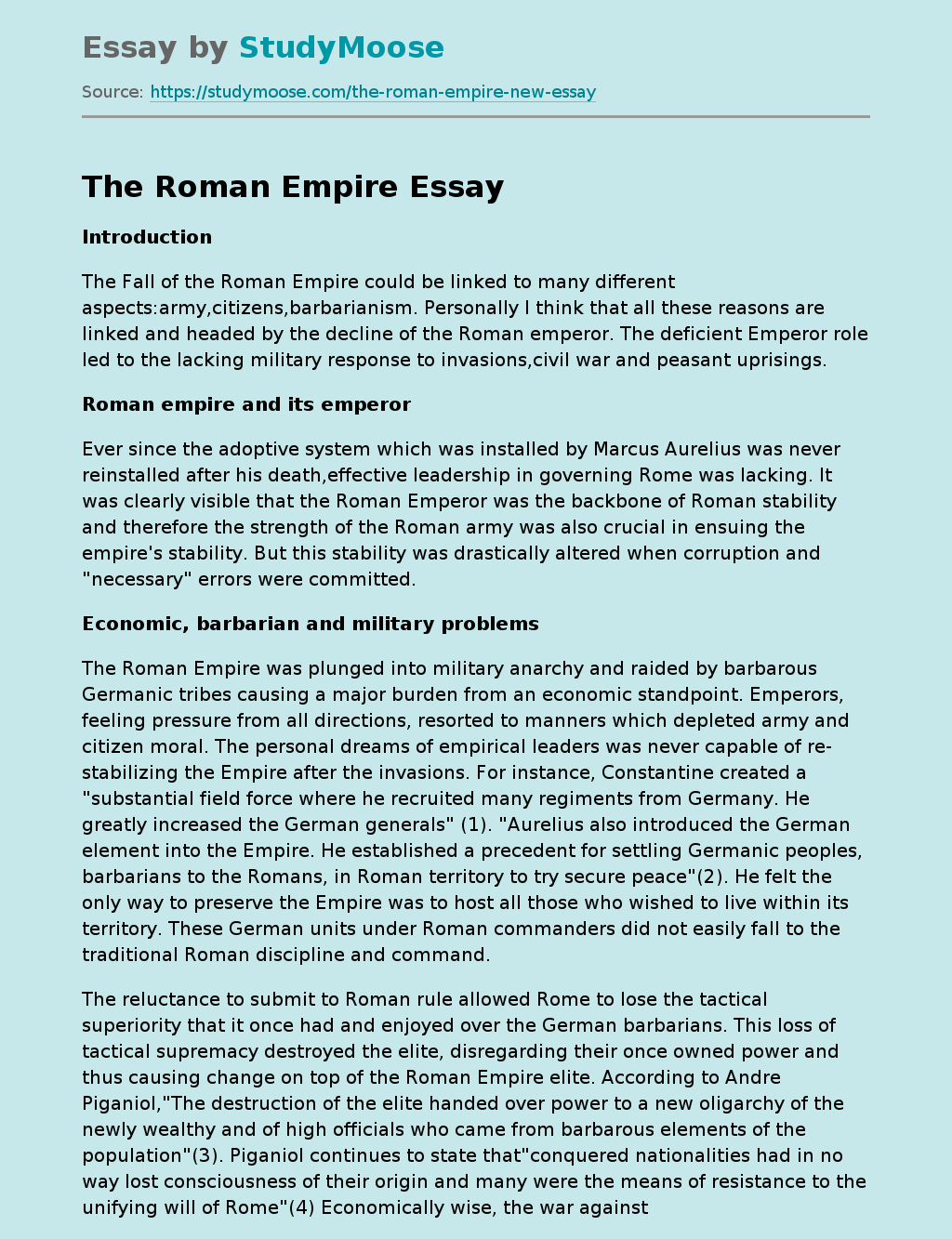