The role of the youth in the peace process

There are more young people than there are adults in many parts of the world so the youth must have an active role in peace building. It is ironic that while the number of young people is overwhelming, their contributions to a more peaceful society is mostly ignored. Young people are labeled as troublemakers and rebellious and so the enormous task of creating a harmonious society is left at the hands of adults. While it is true that there are many young people who are irresponsible, the task of making a more tolerant society requires the support of everyone.

Don't use plagiarized sources.
Get Your Custom Essay on The role of the youth in the peace process Just from $13,9/Page

Young people are mostly left out of important activities because “they are too young to understand”. I find this belief quite disheartening because age is not an indication of maturity. The role of the youth in peace process occupies the main control. Observe that places which operate their youths in the right direction are more advanced. The upbeat minds of the young people are used to act as the guide light in the peace process.

Whereas, places who fail to recognize the importance of their youth are left behind in every possible responsibilities of life. Young people, as vibrant members should be utilized and be trained to play a crucial role in peace process. This is the problem of most countries, including Philippines. Many countries believed that the power of the Adults are enough to achieve the ideal peace they want, but that is where they fail to understand. The power of the Youth hasn’t yet been explored. It is because; Adults haven’t yet taken the action to unleash our potential to play our role as peace builders. People! We are the relevant actors in accordance to peace process. Now, let me clarify you the starting point: You must first stop condemning us as violent or trouble makers. Inserting that false idea to minds would prevent you from giving us the freedom to function and to make use of our potential-peace-builder minds. A popular belief indicated that young delinquents or soldiers, are not born “evil” and human beings are not by nature violent or criminals.

If people keep on seeing us as violent persons then it wouldn’t be that hard to play that role, too. The reason why we cannot function efficiently is because you have already carved to your minds and have generally viewed that we are always the violent actors in most conflict cases. May be true, but don’t let that idea be a generalized description of us. And if that belief continues, as seen today, young people will continue to use violence in dealing with conflicts. It is because, that is the thing taught to them who they are. On the contrary, if young people are encouraged, because that’s the main ingredient, encouragement, we could believe into ourselves and believe that we are what you expect or picture us to be, the ideal peacemakers, or scholars’ maybe. But if you don’t try, as said from Honduras alone: “if society labels them and kills them, of course they are going to respond with violence….For many of them; it is easier to learn to kill than to learn to write.’ True peace is not a quick achieved goal and is not a short-term thing, but a forever idea. It takes time and patience to accomplish. In fact, peace is missioned from generation to the next generation.

Therefore, the present adult generation should make an action to train the following generation to act responsibly. You have to have faith on us and start molding us as peace builders, so that we can complete the by-generation-strategy. It won’t be that hard, because youth are open to new ideas and welcomes new challenges while adults have already formed their fixed dissertations. It doesn’t nearly take much sweat to take us where you want us to be in some cases. Now for the youth to participate in the peace building, two things must be developed within: Character and Good Citizenship. These things usually are found within the kids who excel in leadership at their school. These kids only need a little bit more motivations and training to even mold up their selves into the ideal peace builders. However, this will not create an assured action of the young people for peace by themselves. As they are trained to be soldiers, youth need to be supported as builders of peace and democracy.

Their potential and power has to be developed in order to sustain a process of change. Youth participation should be encouraged at all levels of social interaction, from the neighbourhood, school, and local community to the national and international levels in a large diplomacy approach. They should be given responsibilities according to their capacities and be taken seriously. Young people should learn from other movements’ histories and achievements. In this respect, A similar resolution would help to raise awareness and develop processes towards the inclusion of young people in peace-building. Young people should undergo training opportunities in conflict transformation, mediation, negotiation skills, facilitation of group decision making process, project and organizational management and other themes of their interest and/ or relevant to their social contexts or a leadership camp. The youth must be provided with the necessary education they need.

And by education, I don’t emphasize just going to school, That word education is derived from the Latin word ‘educo,’ meaning to educe, to draw out, to develop from within. An educated man is not necessarily one who has an abundance of general or specialized knowledge. An educated man is one who has operated his mind that he may acquire anything he wants or its equivalent, without violating the rights of others. Any man is educated who knows where to get knowledge when he needs it, and how to organize that knowledge into definite plans of action”. It only takes a man of purpose to see that he gets the right education.

The wrong school is the wrong mentality acquired over the years. The key to complete these is allowing youth the time and space and putting your trust to them to take up the initiative to act. By these, the youth’s role is now finally clear: We are the agents towards the positive change, We are the main actors for the world peace. Therefore, if youth are only viewed as powerless and trouble maker people then the youth’s power or potential won’t be harnessed for peace. We could be the key to the peace, but you, my parents, are the key to unlock this untapped potential within us.

The role of the youth in the peace process. (2016, Jun 16). Retrieved from https://studymoose.com/the-role-of-the-youth-in-the-peace-process-essay 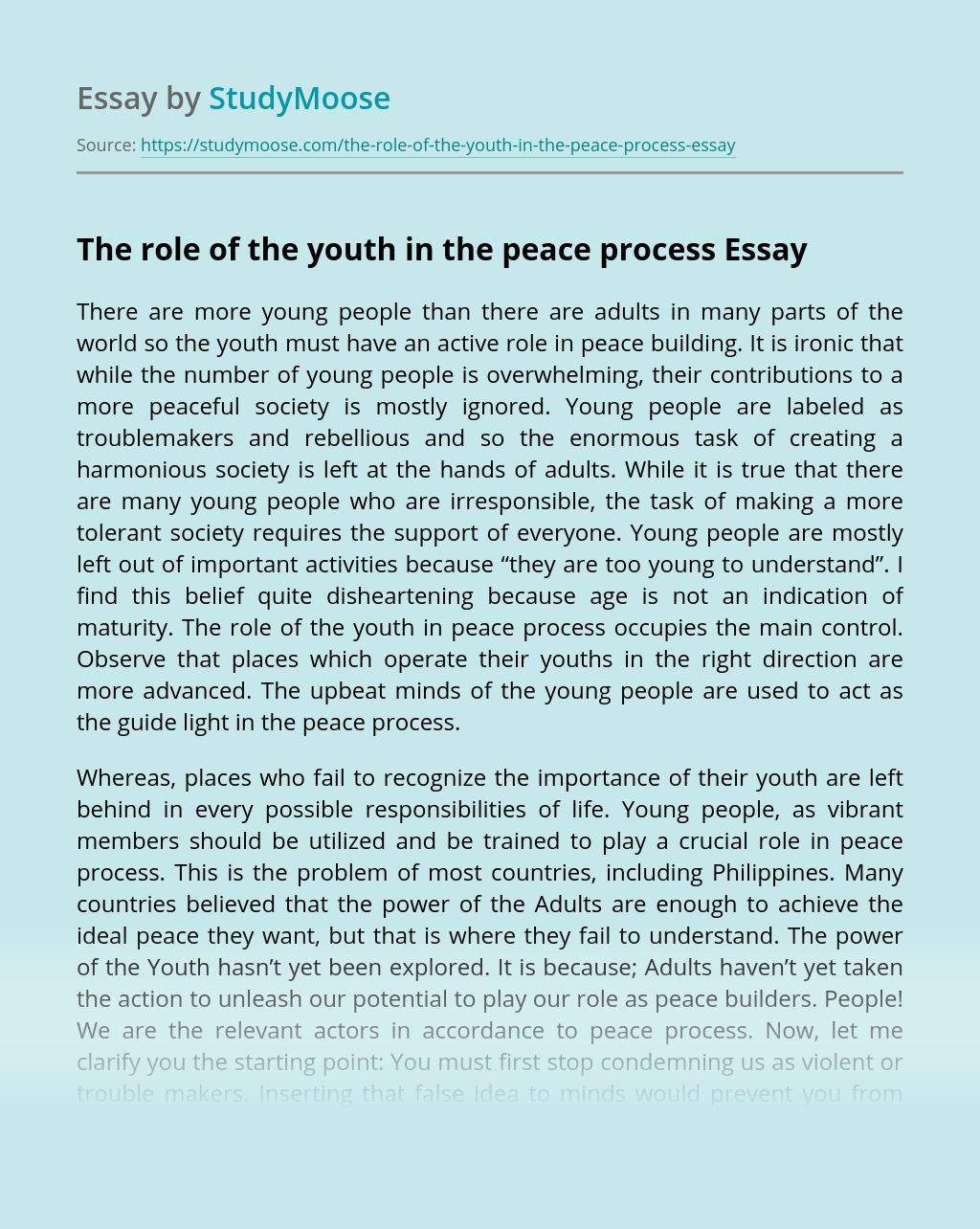 The motor development was consisted of seven periods across the lifespan, each period is characterized by the different motor skills. Progression from one period to another would depend on the changes in three critical constraints, as well as individual’s skills and experiences. According to the developmental perspective, the changes in the motor skills were defined...

Between circa 1925 and circa 1950, the relations between the Chinese peasants and the Chinese Communist Party became out of hand due to the peasant rebellions/uprising groups present, the tension between Japan and the communist party, and most notable the mass reform during this time period. In 1927 the rising leader of the Chinese Communist...

In the film, Good Will Hunting, main character Will Hunting is a troubled young man from a poor neighborhood in south Boston. Following a youth of abusive foster care experiences and only himself left to trust, Hunting leads a life of self-sufficiency becoming a witty sharp shooter. A seemingly independent individual working as a janitor...

A look for men’s health associated site carried out using the public search engine Google.com. Male’s Health Network (MHN), http://www.menshealthnetwork.org, is a nonprofit organization reaching out to males and their households focusing on the growing health crisis that impact the early mortality of guys (Men’s Health Network, 2014). Roughly 50% of the population is male;...

View sample
Foreshadowing in Macbeth: More Than Meets the Eye

William Shakespeare is one of the most, if not the most influential writer in English literature, one that has left us numerous fascinating works about the fall of flawed heroes into despair. 1606’s Macbeth was one of these tragedies, which told the tale of how the titular character, a once righteous man, was influenced to...