The Role of Students In Nation Building

A nation does not live by its big buildings, dams or factories. A nation can live it of its people. There is a proverb that child is the fathers of man. Who is this child? He is generally a school or collage student. So his constructive role is so important that he look like a serious father managing his household. Naturally a student of today is a responsible citizen of tomorrow. So it is easily intelligible that a student community taken together builds a nation.

Don't use plagiarized sources.
Get Your Custom Essay on The Role of Students In Nation Building Just from $13,9/Page

Take the case of the students of the Muslim Anglo Indian Oriental (MAO) collage of Aligarh. It is students built the nation of Pakistan. It was the only Muslim collage worth the name in the India subcontinent that produced those students who built Pakistan.

The role of students in nation building has been exemplified by the Aligarh students. Till we got independence in 1947, the Muslims had no organized shape. Politically there were many other parties besides the Muslim league.

Some of them even opposed the creation of Pakistan. Only the Muslim students of India were unanimous in creating Pakistan. They actually did all that the could in making a new Muslim country of their own appear on the map of the world. So we can say that if they had not played their role , the inception of Pakistan would definitely have delayed much longer than 1947. Thanks of their joint efforts.

We may recall that no political leaders could put an end to the dictatorial rules of Ayub khan and Z A Bhutto. It was the students who came forward to play their role in nation building and their unflinching struggle succeeded in causing the renaissance of democracy of Pakistan. It is unfortunate that the later staunch dictators like Zia ul Haq have been banning the formation of students unions. What was it is results?

We have entered the new millennium through the the start of the 21st century and democracy is not yet at our doors. This brings us to the conclusion (result) that as long as students unions are banned the entry of democracy in Pakistan will also remain banned in Pakistan. This is because no students wants to play any type of destructive role while, we have experienced multifarious ( various) shape of the subversive (destructive) political leaders, particularly in provoking (aggravating) sectarian clashes and thus bringing damage to the smooth running of our economy

The Role of Students In Nation Building. (2016, Aug 18). Retrieved from https://studymoose.com/the-role-of-students-in-nation-building-essay 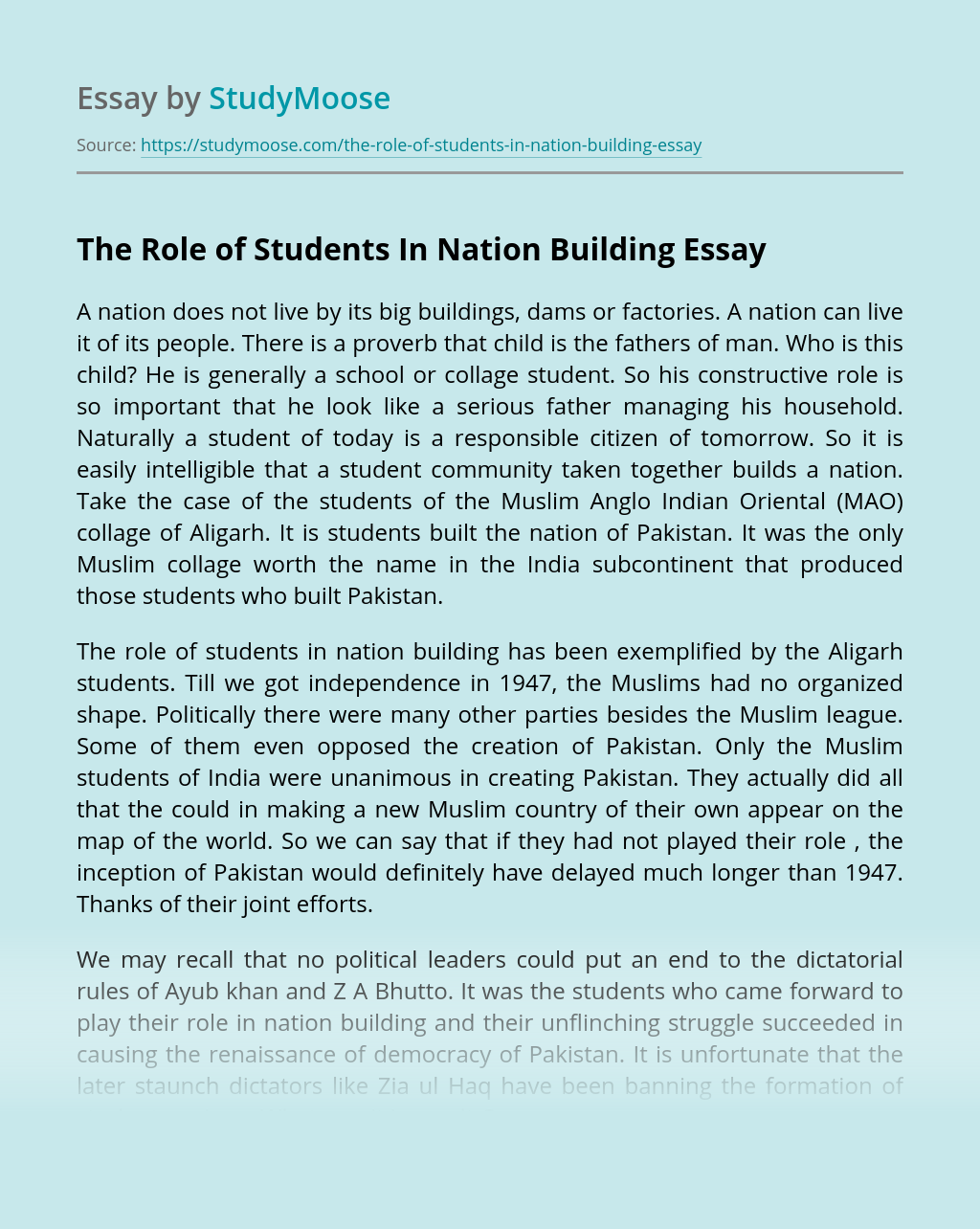 Getting in touch with media law during the first semester of my Masters gave me a sense of the importance of law in general because it consists of acts and articles which organise most issues in the human’s life in a way that protects ethics and morals. Regardless of the hypocrisy and double-standards of the...

1. The word “Islam” is derived form the Arabic root “asalama” which literally means peace, purity and submission. Thus Islam means “surrender to the Almighty” and Muslim means “one who is in a state of submission”. It is understood that this submission is to the Will of God, as is laid down in the Quran....

The paper talks about the importance of the Quran and the Sunnah as the primary sources of Islamic beliefs, practices, and law, and their influence in Muslims daily life Islam. Islam is a religion that was originated when Prophet Mohammad (PBUH) began to spread the teachings of Allah (God of the followers of Islam) in...

The period from 600 C.E to 1450 is often referred to as the Post Classical period. There were many developments and reforms that occurred during this period however one of the most important events that happened was the establishment and the spread of Islam. Islam is a very prominent religion in the world for its...

Islam and science describes the relationship between Muslim communities and science in general. From an Islamic standpoint, science, the study of nature, is considered to be linked to the concept of Tawhid (the Oneness of God), as are all other branches of knowledge.[1] In Islam, nature is not seen as a separate entity, but rather...