The Role of Oracle in Oedipus the King

The downfall of Oedipus the King was fated by the Gods and he was unable to change his destiny. The first question in the play is the role of oracle or fate in human destiny. All actions of Oedipus were formed by a virulent divinity. For example, Oedipus was foretold by the Gods to kill his own father and to get married with his own mother. It is seen from the play that exactly the Gods willed him to do everything he didn’t want to.

Oedipus was shown like being free at his choices and his ways.

Nevertheless, all the events in his life were fated. Oedipus was completely sure he was the master of his life; he had the complete power over it. He stood apart from all people surrounding him. That was the main reason why Gods decided to show him that his life was in their power allowing him to be only a pawn in his own destiny.

The success with Sphinx, for example, was connected with the Gods’ actions providing Thebes with everything needed.

Nevertheless, Oedipus thought it was fully his success and Gods bore no relation to it. He attributed this success to himself committing one more mortal mistake – being too self-assured. God showed Oedipus the way of his life, all his thoughts and deeds. It was strange and incomprehensible power of the God making Oedipus’ luck one more his action. It is argued that there is no talk about the downfall of Oedipus in the play.

But it is surely connected with the God’s will. The play spoke about an awful storm overwhelmed Oedipus.

Furthermore that storm presumably was the sign of God’s will. Only in the last moment – in the moment of mental discernment he understood how fool he had been. In the result he put out his eyes providing the evidence that his downfall was also fated. Thereby he expressed the main idea of the tragedy: it is the God who rules the destiny and the person is only an instrument. The fate and inevitability are nothing compared to a person who understands and realizes his own moral and spiritual essence.

The Role of Oracle in Oedipus the King. (2017, Feb 27). Retrieved from http://studymoose.com/the-role-of-oracle-in-oedipus-the-king-essay 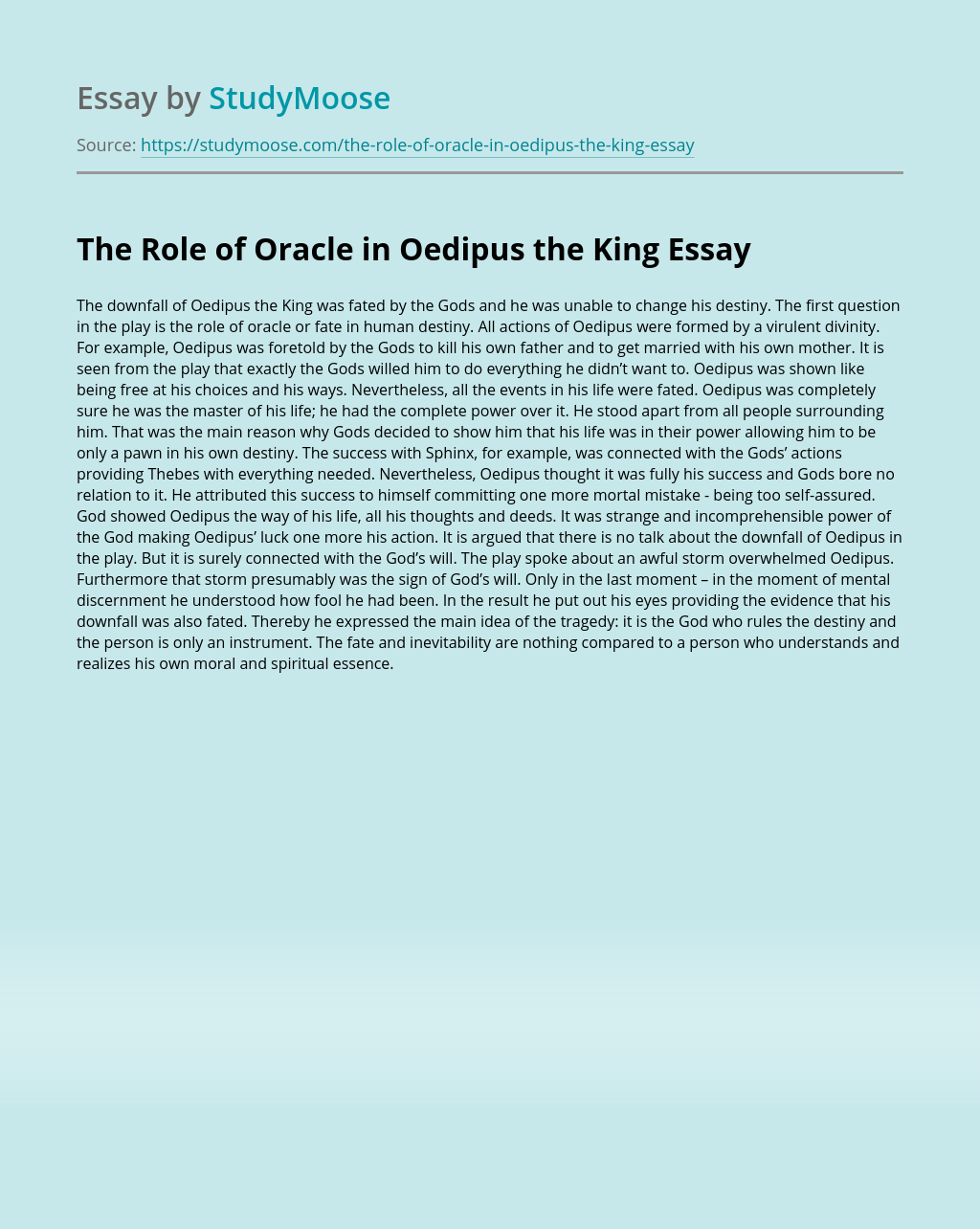 Don’t waste time
Get a verified writer to help you with The Role of Oracle in Oedipus the King
Hire verified writer
$35.80 for a 2-page paper
Stay Safe, Stay Original