The Role of Netherlands in World War II

The Netherlands started out a neutral country with wars, until Germany invaded. It was May, 10, 1940. It was peaceful until Hitler came in. The attack was a surprise.

Don't use plagiarized sources. Get your custom essay on
“ The Role of Netherlands in World War II ”
Get custom paper
NEW! smart matching with writer

The Germans used the NSB, a Dutch party with Nazi sympathizers who are loyal to Hitler to help.

The Dutch army was poorly armed and had a fewer soldiers than the German army. The Dutch hopped that England and France would come to help but that never happened. The Germans used them, like it was something that was able to be held in your hand or stored in your pockets.

The Germans rationed out food to the people. They took most for themselves and the military, like most do in times of war.

There was no freedom. The Germans forced the Jews to wear a Star Of David. In the Netherlands was no concentration camps set up, so if anyone was sent to a concentration camp they would have to have been sent to Austria. A resistance was there, but it wasn’t able to do anything until February of 1941.

Before the Germans came in and the war happened, the Netherlands had a population of 8,729,000 people living there and counting. After the Germans came and the war was fought may lives were lost. There was about 198,000 civilian deaths and about 7,900 military deaths. That’s about 205,900 deaths. Plus a cold winter and starvation with everything else going on at the time.

It was 1944 and 1945. The Dutch railway workers staged a strike. The Germans respond by cutting off fuel and food during the cold winter that was going on at the time. Now the starvation is combined with the cold winter and the diseases. This caused thousands of deaths, about 30,000.

All in all, the Netherlands had in important role in World War II. It might have not been the best or nicest role at the time, but it was a role. Their role was for the Germans to use them. The Germans used them, like it was something that was able to be held in your hand or stored in your pockets. Anne and her family had to live there, in the Netherlands, during this time period and at this time must not have been the best, based on the Netherlands at that time. The times were hard and much harder for them, since they were Jewish. We now know how it was like where Anne lived, during World War II.

The Role of Netherlands in World War II. (2021, Dec 07). Retrieved from https://studymoose.com/the-role-of-netherlands-in-world-war-ii-essay 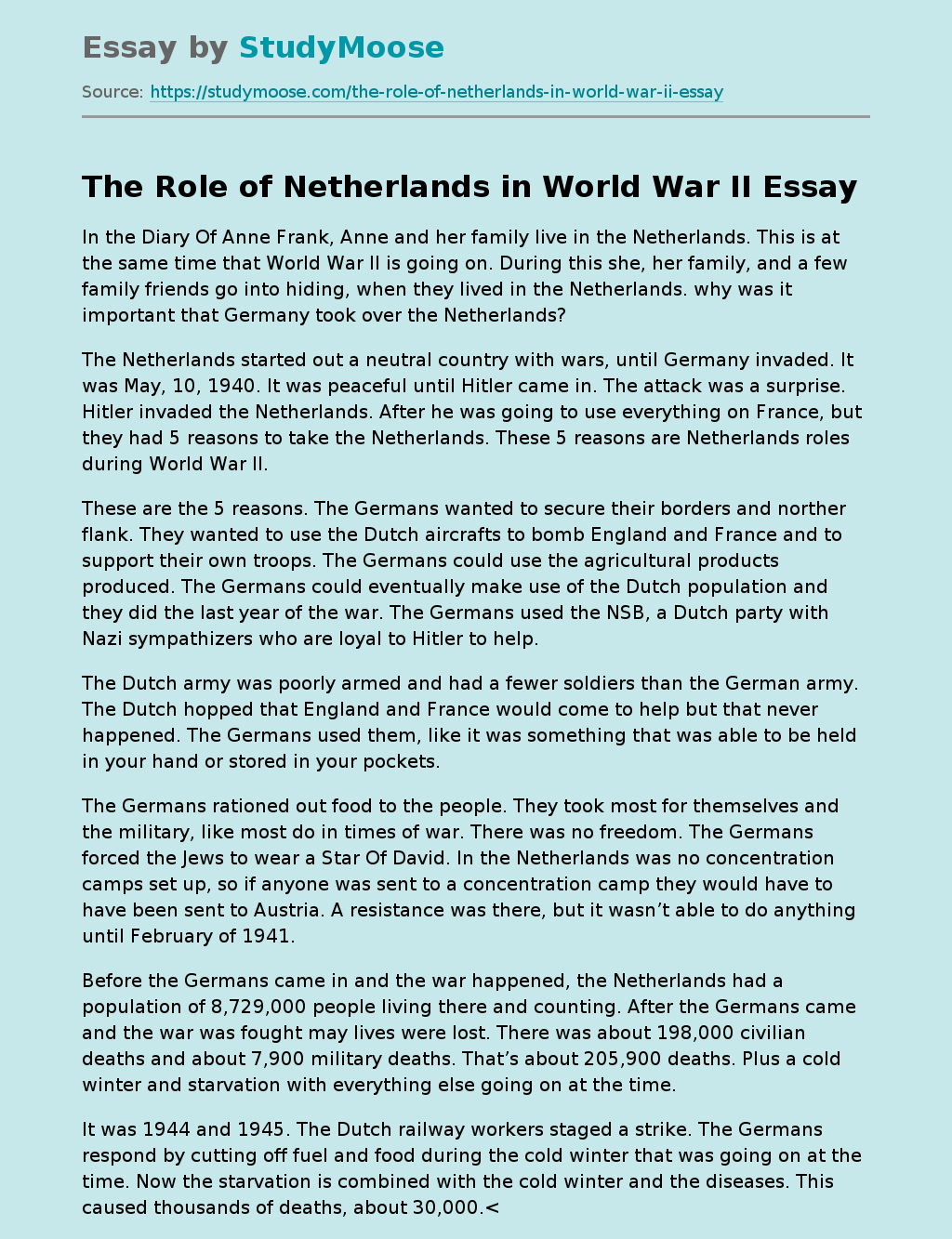