The role of energy in the body

In our bodies we need energy so that we could do things that are possible such as; move our muscles, talk and all the other things that we do. Without energy all people would be useless not being able to do anything. Energy is needed to extract the oxygen from the areas in our bodies and diffuse it into our bloodstream. As warm blooded people we can only digest food and function if our bodies are at a certain temperature and have enough energy, and energy is required for this.

Don't use plagiarized sources.
Get Your Custom Essay on The role of energy in the body Just from $13,9/Page

We need energy to be able to move and use our muscles which also only operate when they are warm. Energy is the ability to do work in our bodies. That means doing everything that a body needs to do to stay alive and to grow: pumping ions across membranes, making new proteins, making new lipids, making hormones, making new cells, neural function, contracting muscles, replacing damaged components, absorbing nutrients, excreting wastes and pumping blood.

-Supplying enough energy to support the many functions of the body at work and play is one of the main functions of food.

This energy comes from the fats, carbohydrates, and proteins in the food you eat. Of the three, fat is the most concentrated source of energy because it furnishes more than twice as much energy for a given weight as protein or carbohydrate. The energy requirement for a person is divided into two parts: basal metabolic requirements and energy required for activity. Basal metabolic rate is the heat eliminated from the body at rest when temperature is normal. An average person requires 2000-2400 Calories per day while a large man doing heavy work may require up to 6000 Calories per day. To release the energy from glucose, oxygen is added (oxidise glucose) by breathing continuously to supply to the millions of cells that undertake cell respiration, this is also known as internal respiration.

The rate that glucose is used at depends on the individuals’ metabolism (B.M.R). The basal metabolic rate depends on the amount of thyroid hormone that is produced. A person that has a fast metabolism then it is less likely that they will put on weight whereas if a person has a slow metabolism then they may tend to put weight on. A factor that can influence metabolism rate is age. This is because as you get older your metabolism will be likely to slow down. Cell respiration:

Waste products of carbon dioxide and water can be excreted through the lungs and kidneys as expired sweat and urine; otherwise the chemical atoms can be recycled to reform glucose. Cell respiration happens in the mitochondria in cells and tissues, e.g. the skeletal muscle, which has millions of mitochondria for increased energy demand. Muscles use a lot of energy in order for movement to happen. When the muscle tissues contract they will need a good supply of glucose and oxygen. ‘http://wiki.answers.com/Q/What_happens_to_the_waste_products_in_respiration#slide=2&article=What_happens_to_the_waste_products_in_respiration’

Energy can be well-defined as the ability to make things happen. Energy doesn’t just appear it comes from the different sources of energy and how they are structured to make energy. The first laws of thermodynamics also known as the conservation of energy states that energy can’t be created but also can’t be destroyed but it is can be transformed into different things for different uses. The first section of the energy law talk about the transformation of energy and how it can change to another form. The second form what has been made may not be able to be used.

There are many different types of energy such as heat, sound, light, nuclear, electrical and chemical. The main type of energy within our body is chemical energy. When a chemical bond takes place this is due to energy doing the work making atoms or molecules form together. Once a new bond has successfully happened between two atoms, energy is needed within this process to make it able to happen. This process normally uses heat but it can be done with other forms of energy as well such as light and electrical. Once a bond is broken it releases its atoms, the form of energy to make the bond is also released with the atoms.

Anabolism make things bigger and consumes up energy. This is done by making bigger units out of smaller units by using up energy in the process. Anabolism, allows the body to reform new cells and maintain all of the same tissues.

Catabolism breaks things down and gives out energy allowing the rest of the body to have access to energy. Catabolism breaks down larger molecules into smaller bits to allow energy to be released. ‘Catabolism provides the energy our bodies need for physical activity, from a cellular level right up to whole body movements.’ http://www.medicalnewstoday.com/articles/8871.php large molecules such as fatty acids and proteins are broken down in this process to make smaller amounts such as amino acid, fatty acid and nucleotides. This happens in such systems as the respiration and digestive system.

ATP within the body is made up from broken down carbohydrates, fats and proteins this is done so that energy can be broken down. Every cell inside us is made up of about 1000 mitochondria, sells such as muscles and the liver may need a lot more than 1000 due to them needing a lot of energy to work. Energy is released from glucose and then its stored until it is needed it is trapped and only released by ATP. Once ATP is broken down it then forms something new which is called ADP, when it is needed to form complex molecules or making your muscles contract. ADP can be recycled and the4n it turns back into ATP. D1 analyses how two body systems interrelate to perform a named function/ functions The process of the air passage from oxygen being inhaled. The air is taken in and travels through the nose or mouth and then goes through the pharynx, which then goes to the larynx. After this has happened the air goes through the trachea into the bronchioles and bronchi, which then later goes through the alveoli which collects air.

Then this is diffused and then enters the capillaries which is then pushed around our body though our blood. The blood then enters the pulmonary vein and goes through the left atrium of the heart. The left and right atrium then contract to push the blood down to the bottom ventricle to build up pressure. The bottom left ventricle then contracts and pushes oxygenated blood through the aorta out to the rest of the body. Once the oxygenated blood is transported around the body it lets out the oxygen to the parts of your body what need it, once it has got rid of all the oxygen it then goes round and collects co2 from inside you and brings it through the interior vena cava and into the right atrium, this then contracts and forces the blood with carbon dioxide into the right ventricle. This then gets pushes the blood full of co2 through the pulmonary artery, which is transported to the lungs which is then breathed out. And this process then carried out over and over again. Arteries always have to have oxygenated blood in if not we would die.

How does oxygen go to the muscles?

The cardiac cycle is a sequence of events which starts at the lungs where oxygen is breathed in. oxygen is transported to the heart where it is transported around the body by oxygenated blood. All arteries are full of oxygen around the body, it then branches of like a tree into smaller arteries (branches) named arterioles. From the arterioles the blood it then moved around to the capillaries, which touches the muscles and organs. Capillaries are always connected to muscles. Our blood gives oxygen to our muscles and organ. Once the muscles have used the oxygen it then gives out unwanted co2. Our blood then collects any spare co2 which has been release by our muscles and organs. This is then scooped up through our blood and our blood transports the co2 through our veins and then to the heart up to our lungs and it then breathed our, so we breathe our co2. The heart very important muscle that pumps blood around our body to allow us to live. Our heart is found in between our lungs but is also protected by our ribs. ‘When the heart muscle contracts or beats it pumps blood out of the heart.

The role of energy in the body. (2016, Apr 27). Retrieved from https://studymoose.com/the-role-of-energy-in-the-body-essay 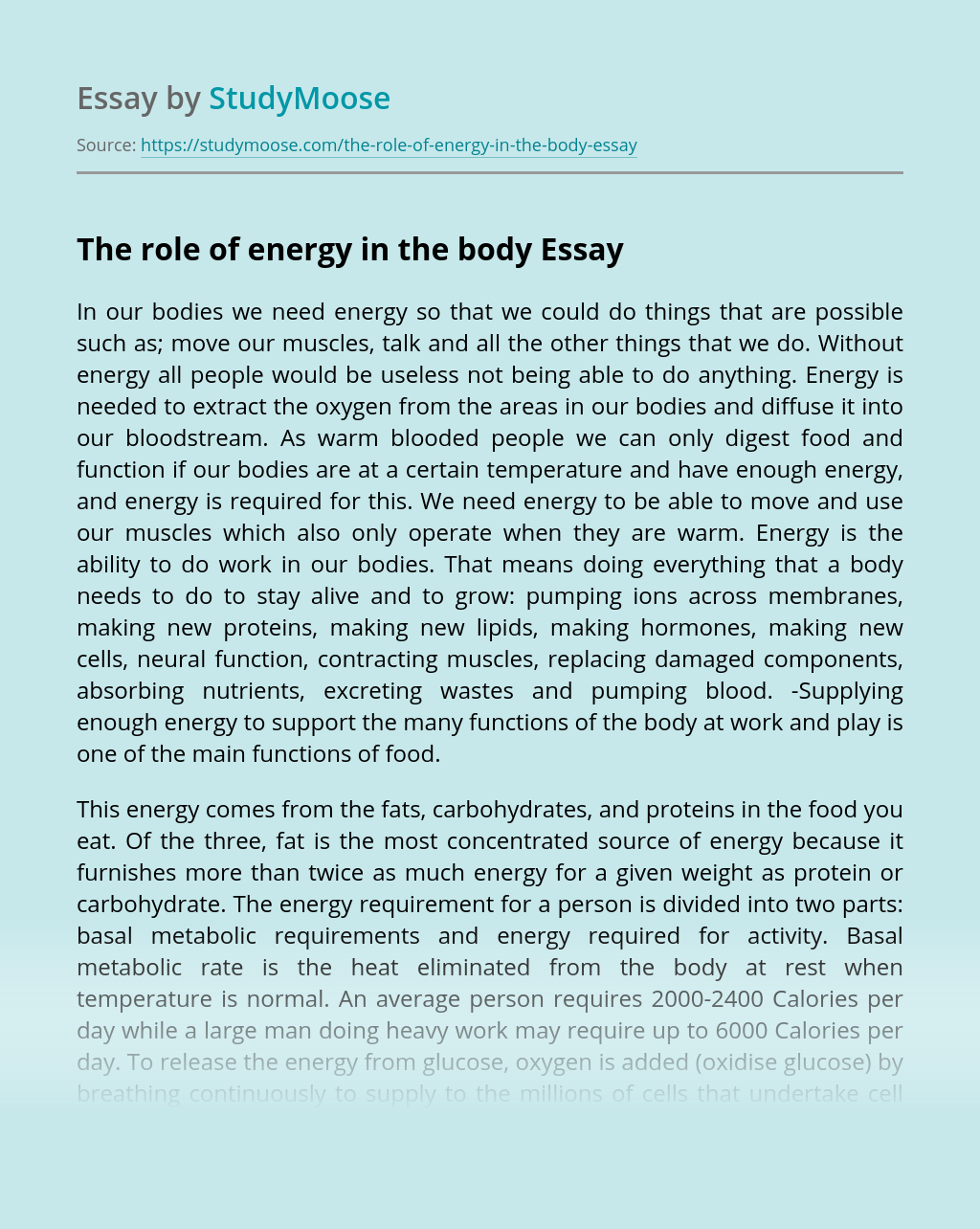 Imagery in Johnny Got His Gun and Cry, the Beloved Country

Rate this post We all have wished to change something in our lives. Everything would be perfect if we could control what happens in the world. However, we know that life offers us no choice but to accept changes that occur in life. Therefore, we grieve at piteous downfalls but rejoice great transformations. Trumbo and...

Report on Driving vs Carpooling

Rate this post INTRODUCTION Background This report was created to present the findings of a study aimed to curve the impact of the large number of workers we employ on local traffic. Many city and county transportation officials are interested in exploring ways to solve the traffic issues. The research in this report analyzes the...

Get Essay
DataClear Company Analysis: Go Global - or No?

Rate this post Executive Summary DataClear, a US based company within its two years of operations since 1998 has occupied a dominant position in the data analysis market of US by serving telecommunications industry and financial service providers. The company feels threatened by the VisiDat’s upcoming data analysis package with the global targets. CEO, Greg...

Writing an Argumentative Essay about a Social Topic

Rate this post Water is a vital part of human life. It is used in various daily activities that constitute the essentials of human life. Water is consumed for drinking, taking a bath or showering, brushing one’s teeth, cleaning up the house or the car, watering the plants, and such. Although water is a naturally-occurring...