The Role of Cultural Identity in the Life of the Author in Spit at the Root: An on Jewish Identity, an by Adrienne Rich

In her work Split at the Root: An Essay on Jewish Identity, Adrienne Rich allows us to explore her cultural identity as she attempts to determine its role in her life. She covers the relationship between her present self and her past memories as well as the effects that anti-Semitism has had on that relationship. She discusses various stereotypes and anti-Semitic ideals from the time period and I will cover whether those issues are still relevant today.

Adrienne Rich, a renowned poet, was born in 1929 in Baltimore, Maryland.

Don't use plagiarized sources. Get your custom essay on
“ The Role of Cultural Identity in the Life of the Author in Spit at the Root: An on Jewish Identity, an by Adrienne Rich ”
Get custom paper
NEW! smart matching with writer

Being the child of Arnold Rich, a pathologist and the Chairman of Pathology at John’s Hopkins University, and Helen Rich, a concert pianist and composer, Adrienne came from a very well-educated household. She often discussed her father’s high intellectual expectations of her in her works (Pope).

Growing up in the 1940s Rich struggled with her cultural identity as well; her father was Jewish and her mother was a WASP. According to Jewish law Rich was not to identify as a Jew because her mother was not a Jew.

However, non-Jewish people still considered her a Jew, and in a largely anti-Semitic era this posed some issues for her. Because of the general opinion of Jews in that time period, Rich’s father chose not to identify with his Jewish heritage and so offered little guidance for Rich in developing her identity (Rich).

Arnold Rich’s lack of cultural guidance for his eldest daughter and her resulting confusion, anger, and resentment are what largely led to the writing of Split at the Root: An Essay on Jewish Identity.

This piece is found in the Transition and Transcendence: Connecting Past and Future portion of the anthology. In her essay, Rich takes the cultural knowledge she has gained throughout her life and attempts to relate it to memories to discover how it has shaped her current identity. This relates to the chapter in which it is found because Transition and Transcendence is all about “coming to terms with the actions of memory” and the “effort to connect various versions of the self…through memory” (Skerrett).

The main issue discussed in the piece is anti-Semitism. Rich discusses her Southern Christian upbringing from her mother’s WASP side of the family and, on page 327, their refusal to use certain words such as Jew. Rather, they used things such as “Hebrew people” or “people of the Jewish faith.” Though her father was a Jew, he refused to discuss it with her and even encourage her acceptance of anti-Semitic views, as on page 328, when he helped her practice saying the word “Jew” with contempt and disgust for a play (Rich).

Rich did not truly begin to question her identity and upbringing until she was in high school, just after World War II ended. She saw a movie of the Jews being freed from concentration camps and she began to question whether to identify with their suffering. She returned home to discuss the film with her parents but they were upset with her for seeing it. This was the beginning of her self-guilt, both for not identifying with her own heritage and for questioning the identity bestowed upon her by her parents. (Rich)

Rich’s curiosity about her cultural identity continued to grow until she went to college and met “real” Jewish girls who accepted her into their group and taught her all about the religion, as well as passing. This is where she began to realize just how real the issues of anti-Semitism were and she began to understand her father’s denial of Jewish identity. This realization led her to begin to deny it herself, which only plagued her with more guilt. She began to notice the various stereotypes put upon her and her family because of her father’s Jewishness. She mentions on page 331 being told to “speak quietly in public, to dress without ostentation, to repress all vividness or spontaneity, to assimilate with a world which might see us as too flamboyant” to avoid being see as acting too “common” or “Jewish” (Rich).

The anti-Semitic stereotypes that Adrienne Rich faced growing up and throughout her adult life are still very much relevant today. With the current conflict between Israel and Palestine, the religious views of the two parties are often brought up in discussion. Discontent with the way the Israeli government has been handling the situation has led to many news headlines reporting a rise in anti-Semitism globally, as well as in the United States (Fletcher).

An analysis of modern American slang and Jewish stereotypes gives evidence of continued anti-Semitic views in American society. “Jewing it down” meaning “to bargain for a better deal”, a common slang term in our own state of Wisconsin, shows continued stereotypical association between Jews and money. This negative stereotype was a leading factor in causing Jews to be imprisoned in concentration camps and contributed to the start of World War II (Prell).

One only needs to read the comments for a Jewish related video on YouTube to see the continued anti-Semitic views and negative stereotypes in modern American society. A clip from the popular show What Would You Do? is also a prime example for this issue. This particular episode demonstrated the reactions of average Americans to anti-Semitic actions. The scenario presented showed a young, friendly Jewish couple entering a bakery to hang a flyer and being verbally abused and attacked with anti-Semitic views by the store owner. Throughout the episode many of the customers in the bakery showed no reaction or chose not to get involved. Several customers reacted by defending the Jewish couple through confrontation of the store owner or by simply walking out. But one man defended the store owner and joined him in attacking the couple verbally; he blamed them for the money problems in the country and for starting the Iraq war. Even when confronted by the show’s host questioning his actions, he continued to defend his views. This shows that, though many people have changed their views and would defend individuals from mistreatment for their cultural/religious identity, the issue of anti-Semitism is definitely still relevant (Taking a Stance).

Anti-Semitism played a major role in Adrienne Rich’s life and helped to shape her cultural identity. It has been a continuous issue throughout history and modern American society is no exception. There will likely be little evolution of current anti-Semitic stereotypes for many years as they have remained relatively unchanged since World War II and current world conflicts can only aid in the continuity of anti-Semitism.

The Role of Cultural Identity in the Life of the Author in Spit at the Root: An on Jewish Identity, an by Adrienne Rich. (2019, Aug 19). Retrieved from https://studymoose.com/the-role-of-cultural-identity-in-the-life-of-the-author-in-spit-at-the-root-an-on-jewish-identity-an-by-adrienne-rich-essay 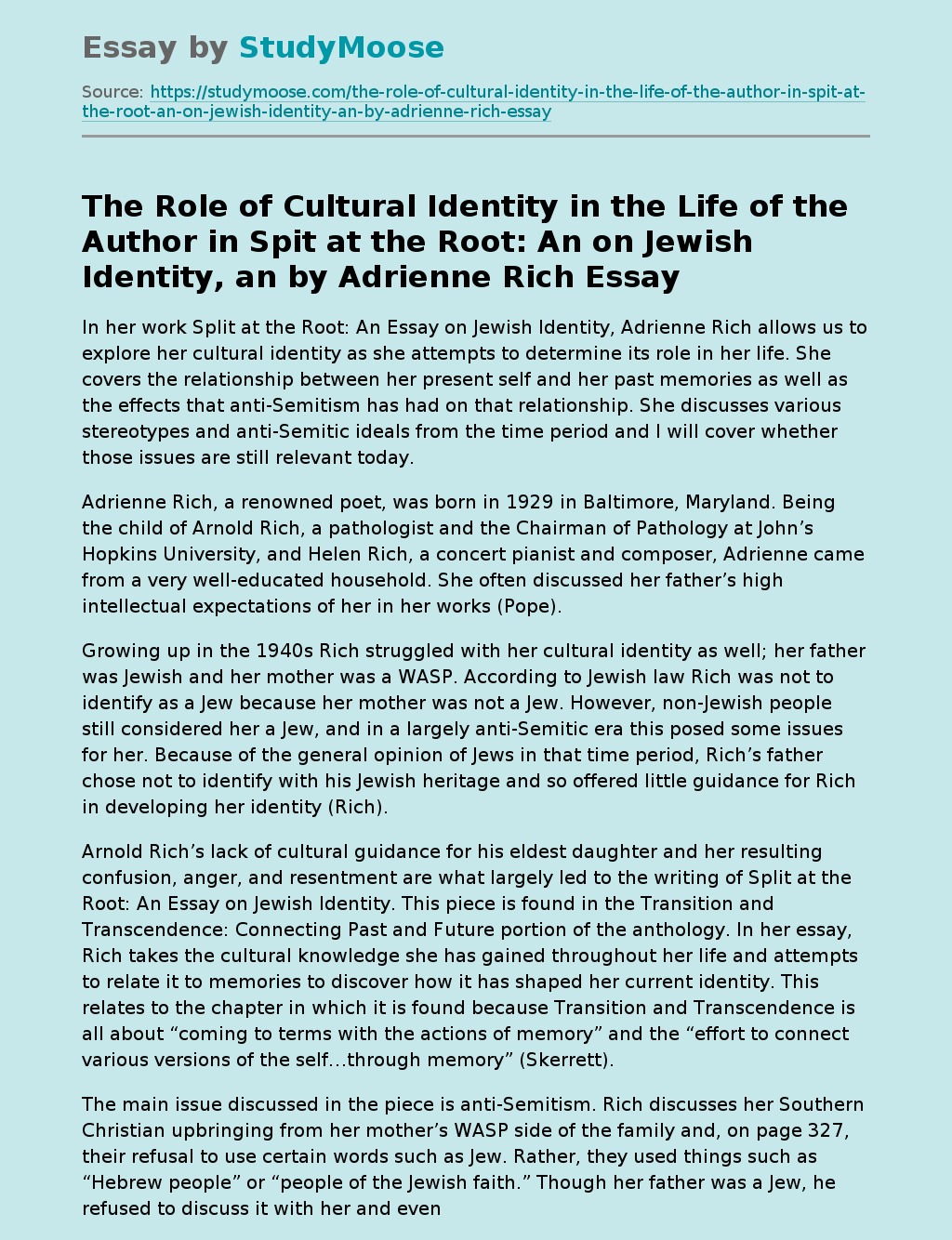