The Role of Alcohol in Dubliners

The role of alcohol in Joyce James’ Dubliners can be seen in three stories: The Dead, A Little Cloud and Counterparts. Alcohol is used by some of the characters who wishes to enjoy and escape. As the author’s technique, she wanted to imply how alcohol is used during the time that she wrote the book. Alcohol has always been present in the culture of people in Europe. Alcohol drinking ritual makes a person temporarily escape reality.  In Dubliners, alcohol is one great influence in the characters of Farrington from the story Counterparts, Thomas Chandler from the story A Little Cloud and Freddy Malins from the story The Dead.

Turn in your highest-quality paper
Get a qualified writer to help you with
“ The Role of Alcohol in Dubliners ”
Get high-quality paper
NEW! AI matching with writer

Alcohol is used to emphasize the theme of paralysis that the author wishes to show to its readers.

There are events in the life of Farrington from the story Counterparts that he clings on to alcohol in order to escape reality. He is a mischievous worker because he steals company time in order to take long hours of lunch break.

But instead of eating on restaurants or at the office canteen, he went to different bars and indulge himself with alcohol. But then his boss finally discovered his misconduct and told him that he is given only half an hour for lunch and not an hour and a half. But this does not shaken Farrington at all, he kept on escaping from his responsibilities and spends most of the time drinking.

He has his on reasons for drinking, for him it is a way to get away from problems.

Instead of loving his job as a clerk, he loves alcohol even more. Because of this, he loss his job by failing to accomplish a given task. He was too busy looking forward to the night he will spend drinking with his friends that he forgot to submit an important paper. His imagination of what happy their drinking session could be made him loose his focus on his job. He was insulted by his boss but instead of apologizing he opt to go out of the office immediately. He is willing to sacrifice everything in place of alcohol. He pawn his watch to have some money for drinking.

When the time comes for Farrington and his friends to drink, Alcohol really made him forget all his frustrations and depressions from his job. The beverage made his personally more boost instead. He proudly told his friend how he fight back his boss and how he ridiculed him. Farrington went on bar hoping with his friends which made him spend and spend lots of money. He felt a little frustrated because of this and so he decided to fight an arm wrestling to impress people. But because of the effect of the alcohol, he loss the battle. Alcohol made Farrington a careless man. His job is replaced by alcohol and when he went home he found out that there is no food for his family. All because of his huge spending in the bars that he and his friends went to. The truth that there is no food for them made him angry and he ended up beating his poor son.

Freddy Malin from the story The Dead is a well known drunkard. Once he is already intoxicated, he is not aware of he’s wrongdoings. For Freddy Malin alcohol means a lot in relation to his social life and merrymaking. But then he is unaware of his actions once he is drunk.  That is why on the event that Kate and Julia Morkin organizes a party for their nephew Gabriel Conroy, lots of food and drinks are served as expected. When Freddy Malins entered the hall, Aunt Kate asks Gabriel to look for him since he might get drunk again. Since one of the guest Mr. Browne is also doing dirty business with other ladies during that night, Gabriel decided to let the two be joined together to avoid unnecessary events. Mr. Browne gave Freddy lemonade instead of liquor to avoid being drunk.

Alcohol also plays an important role in the story A Little Cloud. Here, Thomas Chandler met up his friend Ignatius Gallaher. The two went on drinking for old time’s sake. The two had a good time talking over beer bottles about their careers. Alcohol made Thomas a sentimental fool. His inferiority and depression comes out upon hearing the success story of his friend. He felt ungrateful of his situation as a poor family man. He could have been happy for his friend instead of being envious.

But since the effect of alcohol is there, negativity comes out of his drunk mind. His bitterness continuously shows when he even encourage his friend to have a family of his own so that the conversation be changed. But still Gallaher refuses his suggestion because when he gets married he cannot travel anymore. Thomas is really dismayed and discontented of his situation. He is not sober anymore that’s why many things came across his mind. He could have been a good writer if he did not marry early.

Thomas Gallaher goes home frustrated and depress. The effect of alcohol also made him preoccupied with so many ill feelings and thoughts. He even forgot to buy coffee which his wife told him to do so earlier that day. He sits with their child in their house while contemplating on his life’s disappointments. He even questioned his marital status and blame it for staying in Dublin and not experiencing what success his friend has. He ended up being scolded by his wife because he was too busy thinking that he did not notice that their child was already crying.

Drinking in the cases of the three characters are presented as their natural act. Actions are already done without giving any thought on it if it is really needed or not. Farrington could have save some money for his family instead of spending all of it on drinking and clubbing. His actions is made worst by alcohol. Instead of being depress for his job, he even boasted and told his friend what he did to his boss. The mind is not working properly because of the dizziness caused by alcohol. He ended up beating his son who never did any wrong to him. Freddy Malins on the other hand always connects alcohol with merrymaking.

For him, this is his source of happiness. That’s why on any event, people tend to look over him so that they will make it sure that he remains sober until the party is over. Where in fact, he could do it alone by moderately drinking and thinking first of the consequences of his actions. In the case of Thomas Gallaher, alcohol made him more sensitive. His drunkenness gave him an emotional incapacity. He is filled with too much pains and frustrations. His poverty made him compare his life to his friend which made his situation more difficult. He blames his being married to all his misery which never gave him any good.

The author uses alcohol to show the way characters betrays their personality. They wanted to escape reality thats why they chose to drink instead of setting things straight. The theme of paralysis is justified by alcohol because it makes the characters incapable of doing things. Their mind is crippled and cluttered with alcohol that made them decisions that are uncontrollable.

The Role of Alcohol in Dubliners. (2017, Mar 09). Retrieved from https://studymoose.com/the-role-of-alcohol-in-dubliners-essay 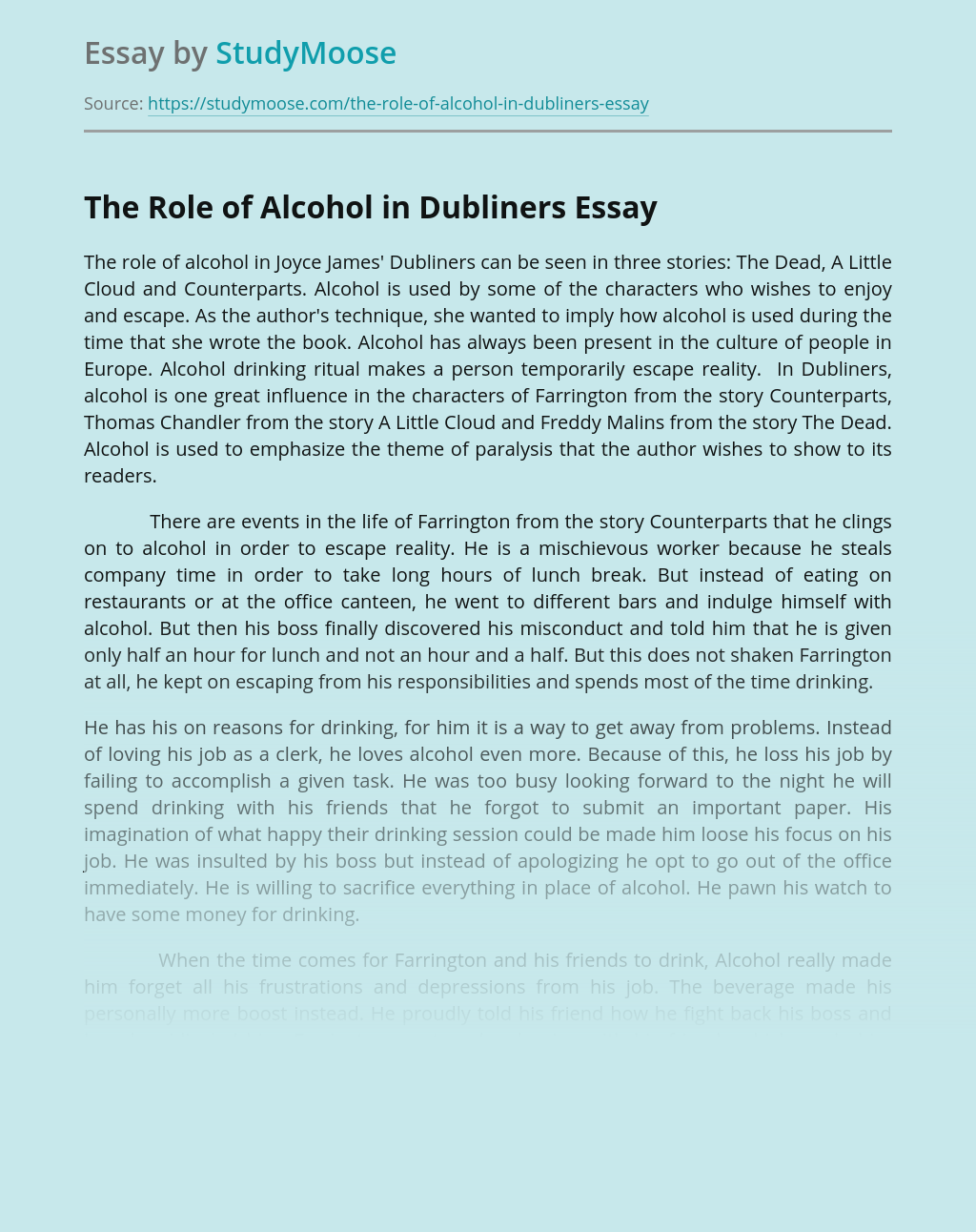 Turn in your highest-quality paper
Get a qualified writer to help you with
“ The Role of Alcohol in Dubliners ”
Get high-quality paper
Helping students since 2015
Stay Safe, Stay Original