The roaring twenties were controlled by the American Dream chasers

The roaring twenties were controlled by the American Dream chasers. In order to achieve social acceptance, much is sacrafisted. F. Scott Fitzgerald wrote The Great Gatsby on the foundation of the American dream. Through personal experience he touches upon the collapse of the materialistic obsessed bourgeoisies. Fitzgerald uses corruption as a main theme and speaks on the fall of the rich and powerful. The authors depiction of the american dream is an illusion, all temporary success seen with the marxist lens will be self annihilated by their own newly corrupted subconscious mind seen with the psychoanalytic lens.

Don't use plagiarized sources. Get your custom essay on
“ The roaring twenties were controlled by the American Dream chasers ”
Get custom paper
NEW! smart matching with writer

The crumbling of the bourgeoisie is due to the distancing from religion and morals, the unstable bubble economy that could pop at anytime, crumbling of the rich through blindness of emotional necessities like love and loyalty,trapped in materialistic obsession.

Fitzgerald metaphorically speaks on religions responsibility for the corruption of the dreamers ,all mentions of religion is dual meaning. Amd can be interpreted in an ironic perspective .

Accordingly, during the span of the story ,many characters develop into complex psychologically confusing beings. This is due to the pursuit of the american dream consuming all of the attention and patients of the chasers. For this very reason all religion and morals are defended by the subconscious minds of those who seek power. The author, shows quite a few times, the separation of good morals that comes with wealth. Firstly, Gatsby is seen referring himself to God ,fitzgerald concludes “The truth was that Jay Gatsby of West Egg, Long Island, sprang from his platonic conception of himself.

He was a son of God”(98). and “So he invented just the sort of Jay Gatsby that a seventeen year old boy would be likely to invent, and to this conception he was faithful to the end.”(98). Gatsby is defensively in denial of his poor past here. He chooses to believe that his real origins do not exist because it jeopardizes his image of class and sophistication. Already we can see Gatsby’s insecurities, he has cut all ties and relationships with his parents for self image. disobeying one of christianity ten commandments” Honor thy mother and father”. Ironically Gatsby pays for his committed sins with his murder later on in the story. Irony is also apparent, in the way that Gatsby refers to himself as a son of God. this statement is much like the success of the american dream : is unobtainable. And in result to Gatsby’s comparison leaves him once again dead. Gods do not die and for that reason this is ironic. Another mention of religion is when mr wilson claims”God knows what you’ve been doing, everything you’ve been doing you may fool me but u wont fool god”.(159) This quote is relevant because it foreshadows tom buchanan fate, throughout the story we see tom commit various morale crimes like (adultrie,thief,lying…etc) and through selective perception does not feel guilty about the questionable things he’s done. Modifying the past as we never find tom disappointed with what he has done throughout the entirety of the story. The author shows God achieving justice by removing both myrtle and Daisy from his life. The quote also shows wilsons acceptance to the economic power, he know his rank in the social pyramid,tom is rich so gorge has no right to accuse tom. However, God is placed above all, and has the power to equalize the faulted. This analogy is based on the marxist framework; Mr.Wilson is the proletariat(working in the valley of ashes),Mr.Buchanan is the Bourgeoisie(the wealthy rich man, And God is put on another tier above all. Therefore, tom buchanan does not achieve the american dream because he is not content with the old money he has inherited for him enough isn’t enough and turning his back against God for greed is the reason he is loveless at the end of the novel

The roaring twenties were controlled by the American Dream chasers. (2019, Nov 14). Retrieved from https://studymoose.com/the-roaring-twenties-were-controlled-by-the-american-dream-chasers-example-essay?post 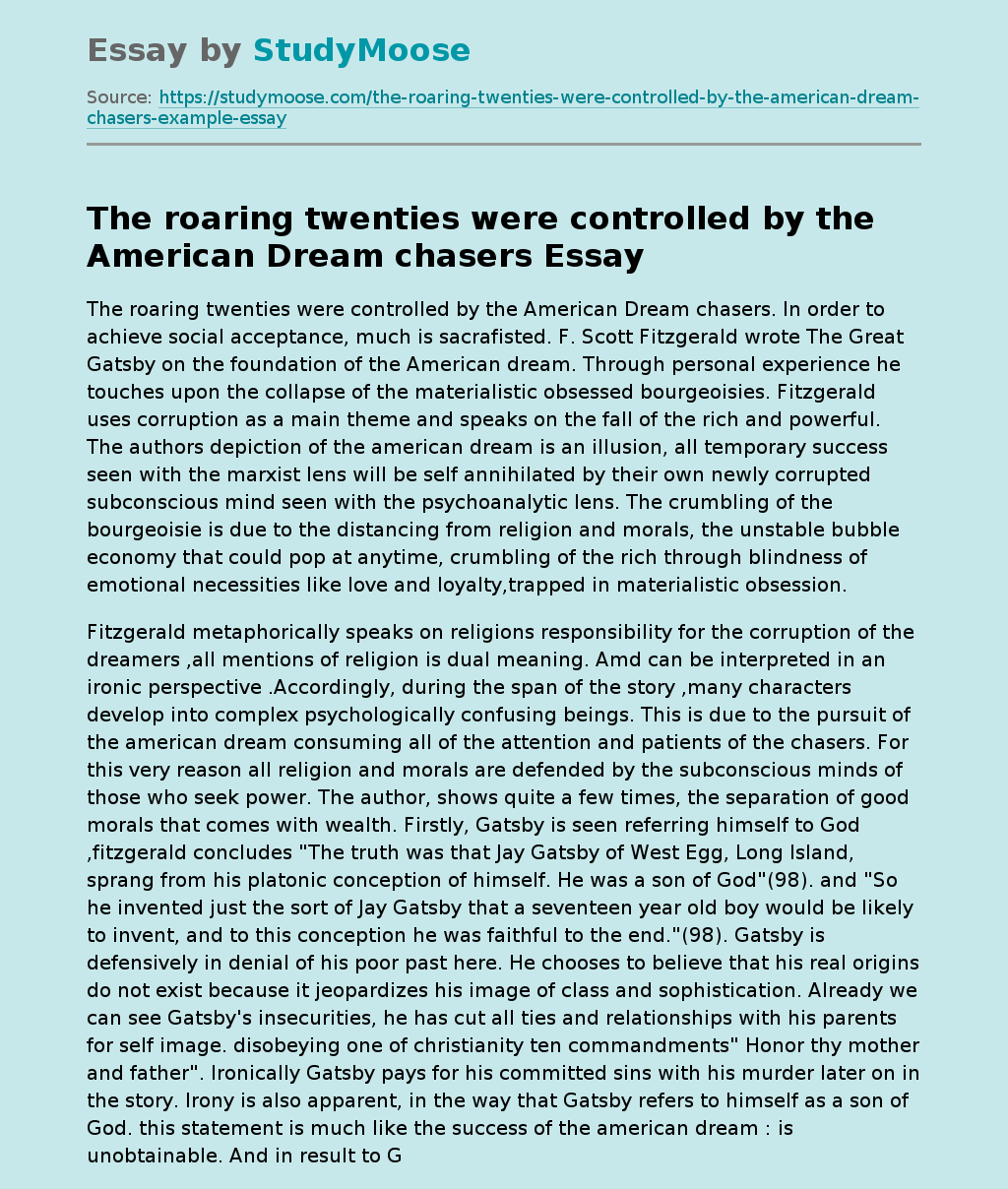