The road to Mecca - Women's Rights

The statement “There is nothing sacred about a marriage that abuses the woman!” refers to social problems that harass women who are frequently the victims of violence and abuse.

Elsa’s view of marriage is that it is a “human rights” approach to the problem of domestic affairs. These problems are more common in poor communities and have a greater outcome on women as they tend to be physically weaker. In The road to Mecca women’s problems appear to be mainly caused by men.

Don't use plagiarized sources.
Get Your Custom Essay on The road to Mecca – Women’s Rights Just from $13,9/Page

Katrina is a good example of this as her problems are caused by her husband, Koos. She is young and has a child and Koos accuses her of infidelity and therefore abuses her. She comes into conflict with social expectations for women because of her teenage pregnancy. In order for Katrina not to be treated unworthy she should get rid of Koos and “find somebody who will value her as a human being” (pg 23), as all women have equal rights to express themselves freely regardless of race.

Another example of women’s problems caused by men besides Katrina is the woman to whom Elsa gives a lift. In this case the woman’s husband died and the owner of the farm where they were staying tells her to pack up and leave the farm. This clearly indicates that her husband had not provided for her and the child should anything have happened to him.

Helen is also an example of women’s problems caused by men. “You didn’t know I wasn’t mourning Stefanus’s death. He was a good man, and it was very sad that he had died so young, but I never loved him.” (pg 71). Helen felt that her marriage was deathly and after Stefanus’s death she felt free. Since her husbands death she has lived alone and transformed her home into a work of art creating her own Mecca of beauty and freedom. Outside her house the yard is filled with figures mostly facing east, representing that they are looking towards the city of Mecca. Helen’s Mecca is a metaphor of freedom and imagination.

The Afrikaners community expected Helen to shiver up and die after her husbands death but instead she began to have visions of Mecca and alienated herself from the whole Afrikaners community, except Marius who is a complex character. He is well – intended and acts in good faith as a representative of the church council, knowing that Helen is part of the conservative white Afrikaners that still have set ideas about religion and Christianity. His actions decrease her happiness and suppress her creativity, instead of uplifting her as he believes, and is unaware of the needs and goals of Helen.

Helen does not express her rights as a woman verbally, but through her work of arts she has learnt to express herself freely without worrying what the community are saying. She finds comfort through this as she does it alone without a man in her life. Helen uses her art as her right to express her personal identity and inner feelings: “It is the best of me, Elsa” (pg 34). Her art and struggle to make it, is a metaphor for women’s struggle in a society that sanctions conformity and control the powerless.

On page 23 Elsa expresses her feelings towards women’s rights, because these rights are supported by the law. “She has got a few rights, Miss Helen…”. Elsa expresses her feelings freely, she is a liberal person and represents women that believe in women rights and freedom of speech. She believes that each person has the freedom of speech regardless of gender, age or race and should express themselves freely.

The road to Mecca – Women’s Rights. (2016, May 01). Retrieved from https://studymoose.com/the-road-to-mecca-womens-rights-essay 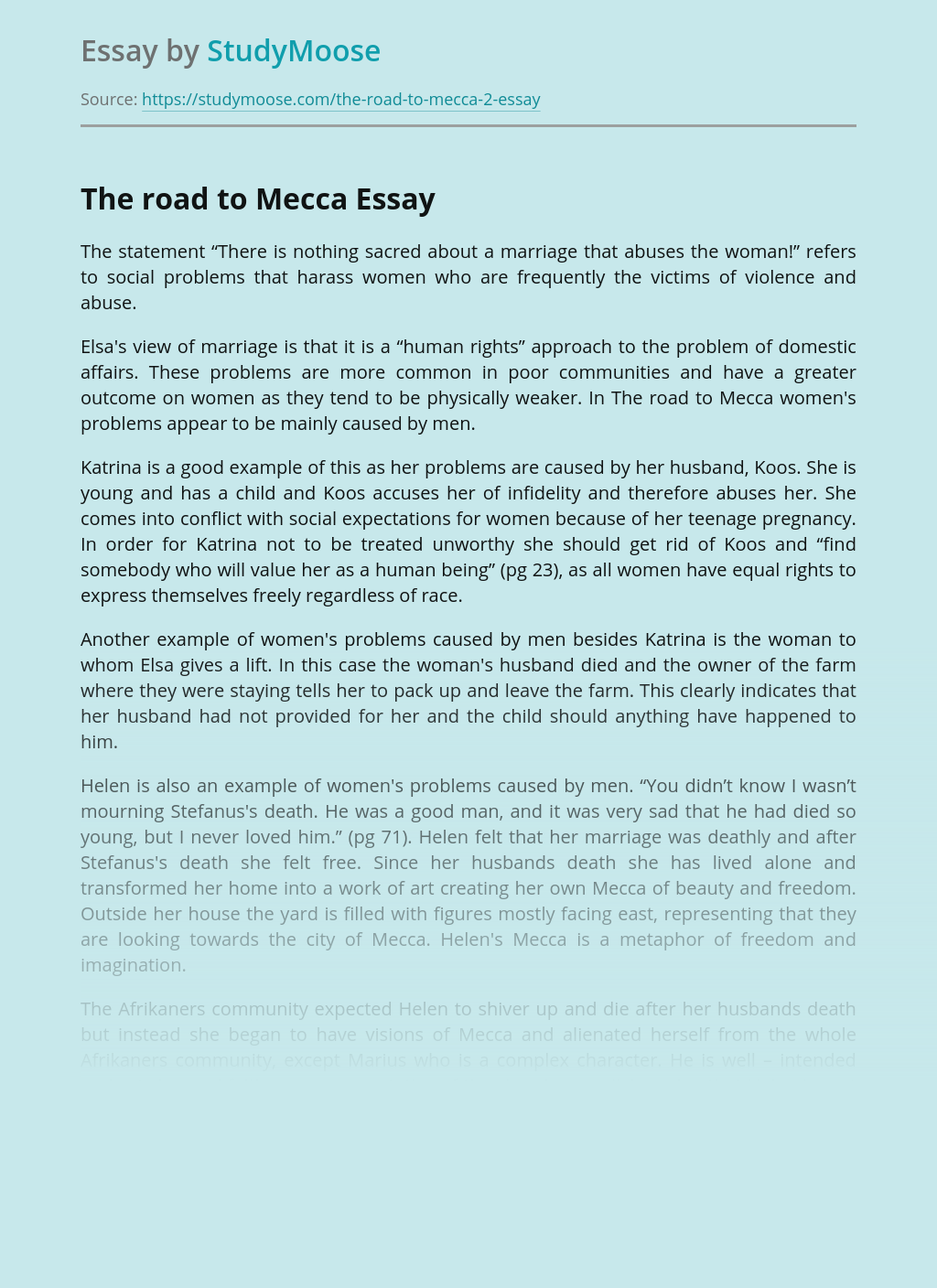 Rate this post The Novel Jasper Jones by Craig Silvey revolves around a young boy named Charlie Bucktin living in the small Australian town of Corrigan in the 1960’s. Charlie is exposed to the confronting issues of racial prejudice, injustice and moral duality. He is challenged to question right from wrong, has to come to...

Rate this post Evaluate ways in which concerns about poor practice can be reported whilst ensuring that whistleblowers and those whose practice or behaviour is being questioned are protected. In any child care setting, staff or volunteers can cover anything that affects the safety and wellbeing of a child or young person. For example: a...

Get Essay
Safeguarding in Health and Social Care

Rate this post The booklet must: Ai Describe in your own words what is meant by the following types of abuse: Physical abuse Physical abuse is the use of physical force that may result in bodily injury,physical pain or impairment.physical abuse may include but is not limited to such acts of violence as striking (...

Rate this post Monsanto Company The Missouri based agricultural company has been named world’s most unethical company. The company leads the world’s production of genetically modified foods. Monsanto is infamous for unfairly suing farmers who try to grow foods both ethically and organically. If the lawsuit is not ruled in Monsanto’s favour, they still achieve...

Rate this post They offer very detailed and disturbing descriptions of life on the Pine Ridge Reservation in South Dakota, the slums of Camden, New Jersey, and the “surface mining” zones surrounding Welch, West Virginia, as well as some places in Immokalee, Florida, that are literally like slave camps. One chapter of the book caught...

Rate this post Whether an animal did something to make you mad or upset, you are going through a rough time, or simply just because you want to, animal abuse is wrong in every way and our society should have more stringent laws against it. Many people take animals for granted and animal abuse is...

Abuse of Power by Public Authorities

Rate this post A serious drawback on Mexico’s development and a significant obstacle to Mexico achieving a functional democracy, the abuse of power hand in hand with corruption have long been a part of the country’s political culture. Because of that, Mexico has earned a privileged spot amongst the most corrupt countries not only in...

The Congregation in Kenya and Legislators