The Road from Colonus by Edward Morgan Forster

Edward Morgan Forster was an English novelist, short story writer, essayist and librettist. He is known best for his ironic and well-plotted novels examining class difference and hypocrisy in early 20th-century British society. Forster’s humanistic impulse toward understanding and sympathy may be aptly summed up in the epigraph to his 1910 novel Howards End: “Only connect”. In part one of The Road from Colonus, Mr. Lucas and her daughter travelled to Greece, to fulfill his dream which has lasted for 40 years.

Don't use plagiarized sources. Get your custom essay on
“ The Road from Colonus by Edward Morgan Forster ”
Get custom paper
NEW! smart matching with writer

When they were in a Khan in a small town of Greece, Mr. Lucas discovered a very strange tree which has a stream flow from it. He was very excited and felt that he had found his “habitant for heart”, so Mr. Lucas wanted to stay there for more time, but his daughter frustrated him and finally they left Greece. In part two, Ethel, Mr. Lucas’s daughter, was about to get married, and she got a parcel from a friend who has been with her during the trip, her friend told Ethel that the tree beside the khan was blow down and all the people there were dead, when Ethel told Mr.

Proficient in: The Road

Lucas about the tragedy, he seemed totally indifferent to it, and just complained about his house and neighbors.

In these two parts, water acted as a very important role. In first part, water stands for passion, energy and it can fresh Mr. Lucas’s old spirits and create a new value for him. So in this situation, water symbolized the reborn of him, but in the second part, fresh water became into dead water, and Mr.

Lucas was totally dead in his mind, and what he can do is to complain the reality.

There are three groups of people in this novel, one group is Ethel and her friends, they are the representatives of young people in Britain of that period of time, and they have received good education, fostered a strict and strong priority of their country and culture, so when they felt that the common value of their society was being offended, the first reaction is to extinguish the possibility of expansion, that is the reason for their objection of Mr. Lucas’s stay in Greece.

In their mind, old people can’t be isolated from the youth and they are supposed to rely on the support of their children and also, their life was being projected by their children. For Mr. Lucas, he is among the old class or weak group of society, on one hand they pursued for independence, and searched for a habitant of heart, so that they could get through the rest days in a very peaceful and independent way, they didn’t want to be interfered by other factors such as children, work, and so on, but on the other hand, the society forbade them to do what they like to, Mr.

The Road from Colonus by Edward Morgan Forster. (2018, Nov 12). Retrieved from https://studymoose.com/the-road-from-colonus-by-edward-morgan-forster-essay 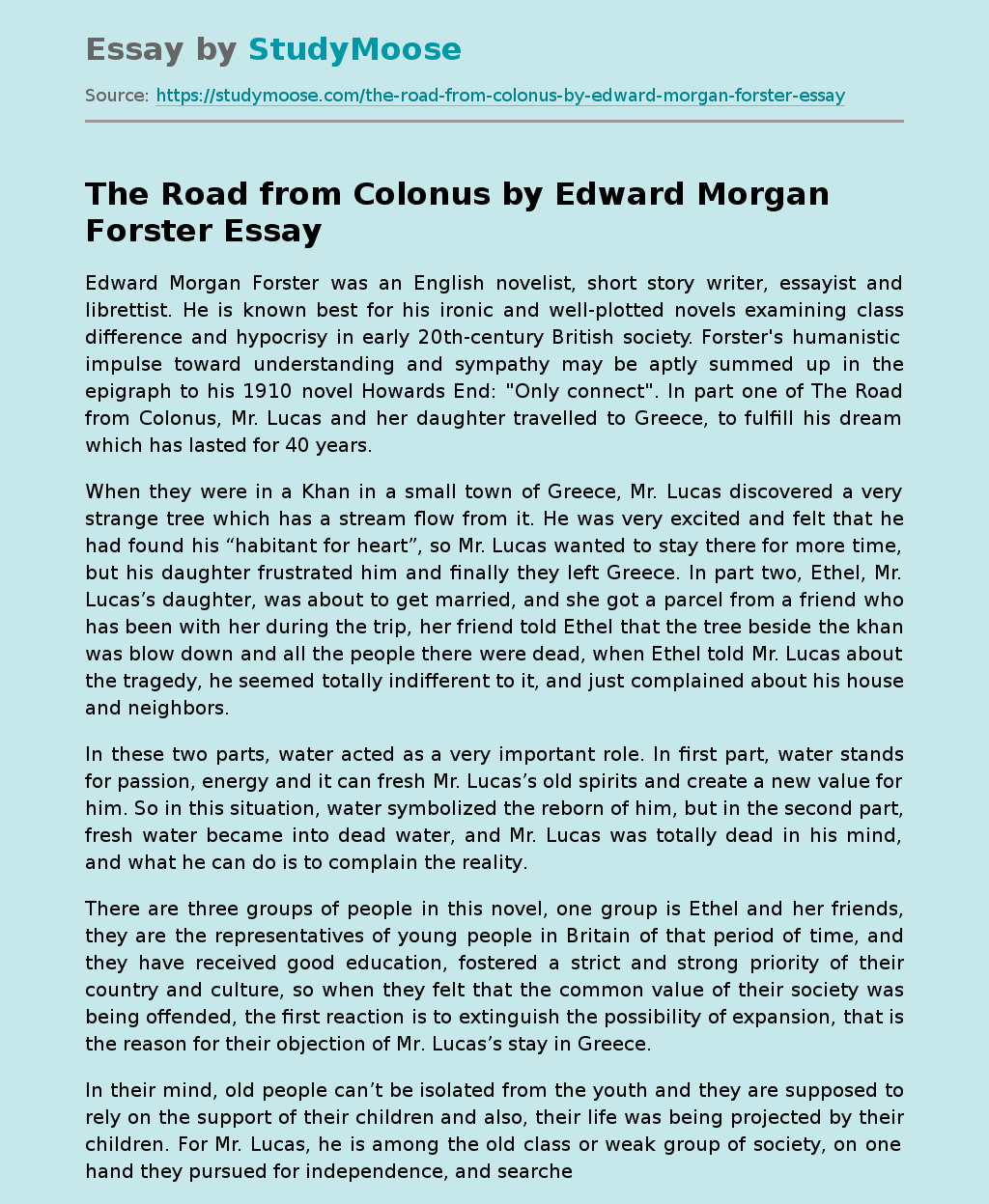