The Risks and Possible Benefits of Legalizing Soft Drugs

In today’s world political correctness says that any sort of narcotic drug should have been forbidden. It has been believed that they have got negative and harmful impact on person who uses them. But is that all behind the topic? People have been using drugs from centuries and first “written” information about it comes form the Sumerian civilization ideograms (dated 5000 B.C.) which shows using of opium for joy. Could they have been wrong with it? In this essay I will try to answer the question about risks and benefits of legalizing soft drugs.

Don't use plagiarized sources. Get your custom essay on
“ The Risks and Possible Benefits of Legalizing Soft Drugs ”
Get custom paper
NEW! smart matching with writer

Firstly I have to explain what is meant by the definition “soft drug”. Mainly the term regards drugs which are not psychoactive and are non-addictive (or the risk of addiction is minimal). Commonly cannabis has been called soft drug. However in the United Kingdom Misuse of Drug Act 1971 amphetamine, codeine and methylphenidate comes under the same class B drugs as cannabis which makes them equally risky.

While some scientific researches show that frequent use of cannabis irreversibly damages brain and amphetamine destroy liver and nervous system, other researches proof that legal stimulants such as tobacco and alcohol are much more perilous than illicit drugs. Apart from scientific research many countries employ no tolerance policy for any drugs. Concern about health of citizens is the main reason for that. It must be said that all stimulants are highly addictive and legalizing more of them, which means easier access, might effect in rise up in number of drug dependence cases.

However there is a high demand for drugs amongst teenagers, students and employers at all levels. Current pace of life favours use of stimulants either for focusing during long, working hours or relaxing in free time. The market is still growing and looks like a bucket without bottom. If governments would legalize soft drugs with taxes on it, profit from sales could go into their budgets instead of feeding pockets of cartels and gangs. It is not a secret that selling drugs is main pillar in funding organised crime without which their power would be reduced.

Another argument for legalising soft drugs is control of official authorities
on content of stimulants. Nowadays a lot of them are produced in contaminate environment or with use of toxic chemicals which might be lethal. Production and sell under control, from known and examined ingredients, good quality drugs together with clear information about dose could reduce deaths due to intoxication or overdose.

Although making soft drugs legal might have some benefits this could also easily bring people into hard drugs such as LSD or heroin. Again there are psychologists who believed that for example use of marijuana breaks barrier of fear against psychoactive drugs. Another group of drug users are thrill seekers. They might easily get bored of legal, accessible stimulant and would turn into illicit and less common substations. Experiments with them might be deadly dangerous, but in optimistic version will finish at emergency in hospital.

This discussion has been going on for years. View on drugs changes with passing time. Until American war in Vietnam amphetamine was used as a slimming agent and medicine for narcolepsy, inflammation of the nasal mucosa, bronchial asthma, but after war 30% of soliders came back addicted to it which leads them into long term psychological troubles as government discivered the danger and delegalized amphetamine. On the other side marijuana which is delegalised in most european countries has become legal in some states of the United States and you can buy it on doctor’s prescription. Nonetheless soft drugs can help in some situations, but have been made illegal because they are simply harmful for irresponsible people who doesn’t know how to use them. Until mentality and knowledge about stimulants would not chagne they should remain forbidden for society.

The Risks and Possible Benefits of Legalizing Soft Drugs. (2016, Mar 14). Retrieved from http://studymoose.com/the-risks-and-possible-benefits-of-legalizing-soft-drugs-essay 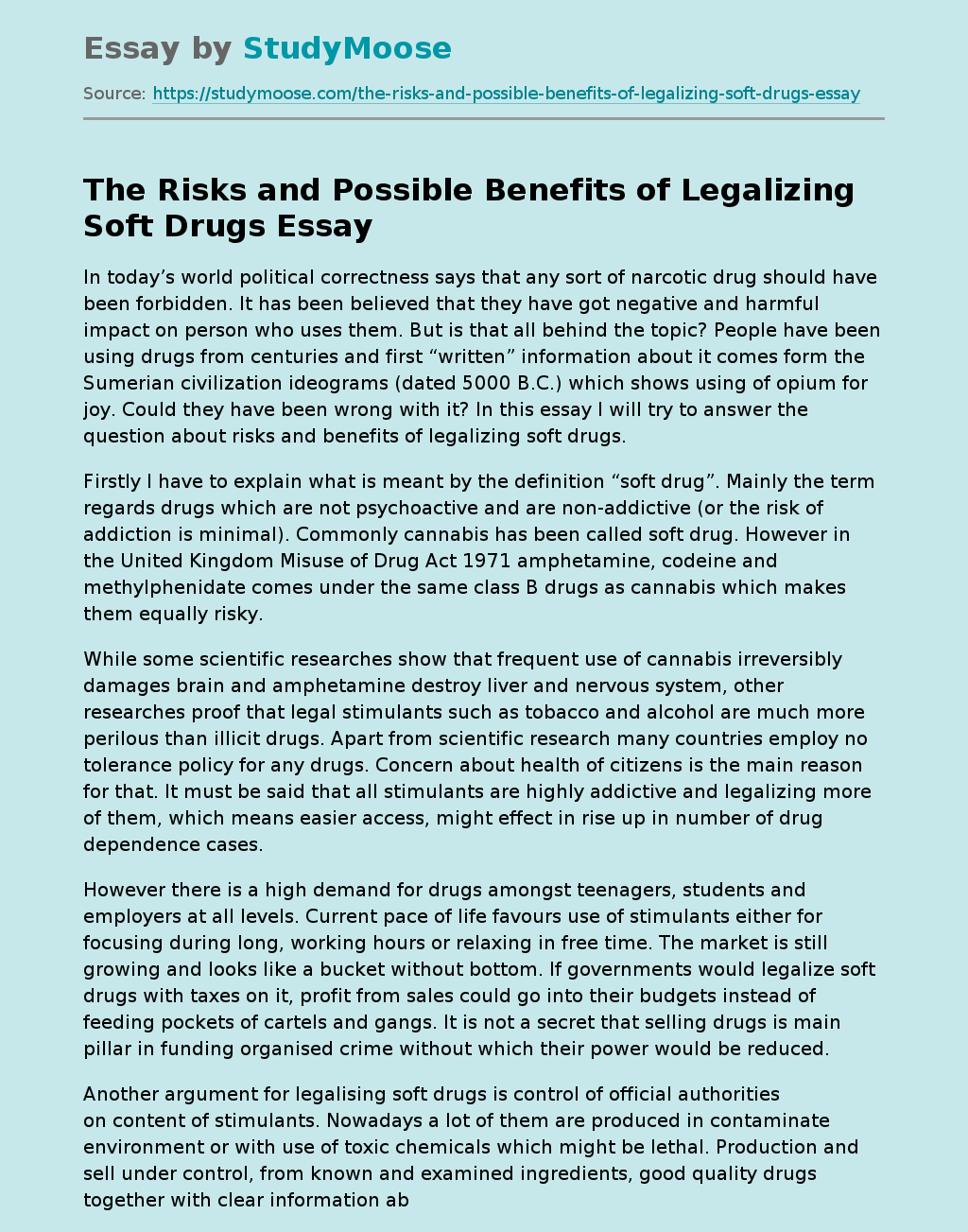