The Rise and Fall of Versailles

The rise and fall of Versailles – Introduction

Louis was the most powerful king who was known for his passion for women and his power to command. Louis liked beautiful women because they made him laugh by teasing and playing with him. Even though it was allowed for the king to have mistress, King Louis did not have a mistress which in return it did not please other kings of the neighbouring country for example Spain (The rise and fall of Versailles, Part 1of 3).

+84 relevant experts are online
Hire writer
Don't use plagiarized sources. Get your custom essay on
“ The Rise and Fall of Versailles ”
Get custom paper
NEW! smart matching with writer

Based on the displeasure of the other kings, Louis had his first mistress and was very careful because he was married even though he only loved the company of women. Louis XIV liked charming women even though he was married to his wife who had children with him. The king did not find everything in his wife and felt that he was not satisfied. Therefore, the lack of attraction towards his wife led him to have a mistress just like his fellow kings from the foreign lands (The rise and fall of Versailles, Part 1of 3).

Charm and beauty of a woman was what King Louis looked for in a woman. The King was out for a woman who matched with his character of a perfectionist which was portrayed in his line of duty as a king. King Louis XIV had passion for new venture which made him to think of establishing a palace that was unique and marvellous. He wanted to build a palace that has never been seen anywhere else and one that his fellow kings would marvel at and feel fascinated.

Most women loved him and always loved spending time with him at any opportunity that they got (The rise and fall of Versailles, Part 1of 3). Even though he was a passionate man and loved to have women around him, he was very cautious and careful when dealing with the women in his company. He made love with some mistress ended up having children outside the marriage. He did not mistreat them although he did not love them.

Louis the king was one of a kind. Being the king he was motivated by his vision to transform the kingdom. Even though he had fired the architect, it did not stop him from building what he had desired, a palace, that everyone would marvel at and make him feel proud. He wanted quick results and also he planned before going ahead to layout his work plan (The rise and fall of Versailles, Part 1of 3). Louis had a vision to build a palace which made him more excited and he want change the kingdom into sparkling and spectacular one. King Louis is a passive project manager who aims for the results regardless of the risk and effort to be applied. He changed a “swam” place in to a magnificent palace in the world (The rise and fall of Versailles, Part 1of 3). Louis XIV was a perfectionist who wanted only the best and that is what he got in the end of everything. Louis the king saw things in a different perspective. For example, the place he built the palace was his playing ground when he was a child and saw that it could be more than a playground and become the most beautiful construction in the world (The rise and fall of Versailles, Part 1of 3). Louis XIV did not only transform the palace by building it, but he also furnished the whole building with silver and other elegant materials which gave the court a complete transformation from what it was previously.

Being the king who was after quick results, the workers faced a tuff time since they had to work extra and to be very careful to deliver the desired outcome of the work. The efforts also led to the death of some workers. Louis was a king who displayed his power in all his life as a king and did not care about the welfare of the workers who suffered while constructing. Instead it led the king to change drastically and did order the corpse to be thrown at night. For example King Louis did not have the patience to wait for the trees to grow (The rise and fall of Versailles, Part 1of 3). Therefore, the workers had hard time since the king was in hurry and was not the type of person to be convinced others wise. Furthermore, being regulated and had to work around the clock made the workers to be worn out. Generally, the workers did not have a smooth time since the king was very strict and followed the rules to the later. He did not feel sad for the woman who lost her son at the construction site. Instead of being compassionate to the woman, he instead ordered for to be punished (The rise and fall of Versailles, Part 1of 3). The actions depicted by the king were that of a cruel king.

Life at Versailles was rigid and strict one. Noble life at Versailles was characterized by a lot of activities that were carried out. From the documentary, it can be observed that the nobles spent most of their time in luxury and attending of ceremonies, which the King was part of every time (The rise and fall of Versailles, Part 1of 3). The nobles engaged in activities such as hunting and carrying out coronation ceremonies. To gain favour from the king, the nobles helped the king to dress in the morning and also handing the king his nightshirt whenever he wanted to go to bed at night. The way of life of the nobles can be described as confused and one without plan because everything they did revolved around the king (The rise and fall of Versailles, Part 1of 3).

Similar to all the human beings, life has its ended. Louis XIV had a problem with his health which resulted in him being operated on his anal fistula. After the operation, it took long for the operated part of the King’s body to heal (The rise and fall of Versailles, Part 1of 3). Due to the illness he suffered from, he lost most of his powers and enthusiasm and the enemies were able to find a space to intimidate him. The king ended up signing a peace treaty by surrendering a territory of France to his enemy. The empire was not also left behind he had to melt some of the gold items in his kingdom to be able to pay his soldiers (The rise and fall of Versailles, Part 1of 3). Louis had a painful death. The reign of Louis XIV is portrayed as a lost reign and kingdom and one that is failure, something that made Lisa Hilton say that Versailles seemed like “dreary” place. Louis XIV was a man of perfection, a trait that France is identified with in all its activities and therefore, I agree with the commentators on the documentary when they called Louis XIV the “essence” or “identity” of France (The rise and fall of Versailles, Part 1of 3).

The Rise and Fall of Versailles. (2015, Nov 26). Retrieved from https://studymoose.com/the-rise-and-fall-of-versailles-essay 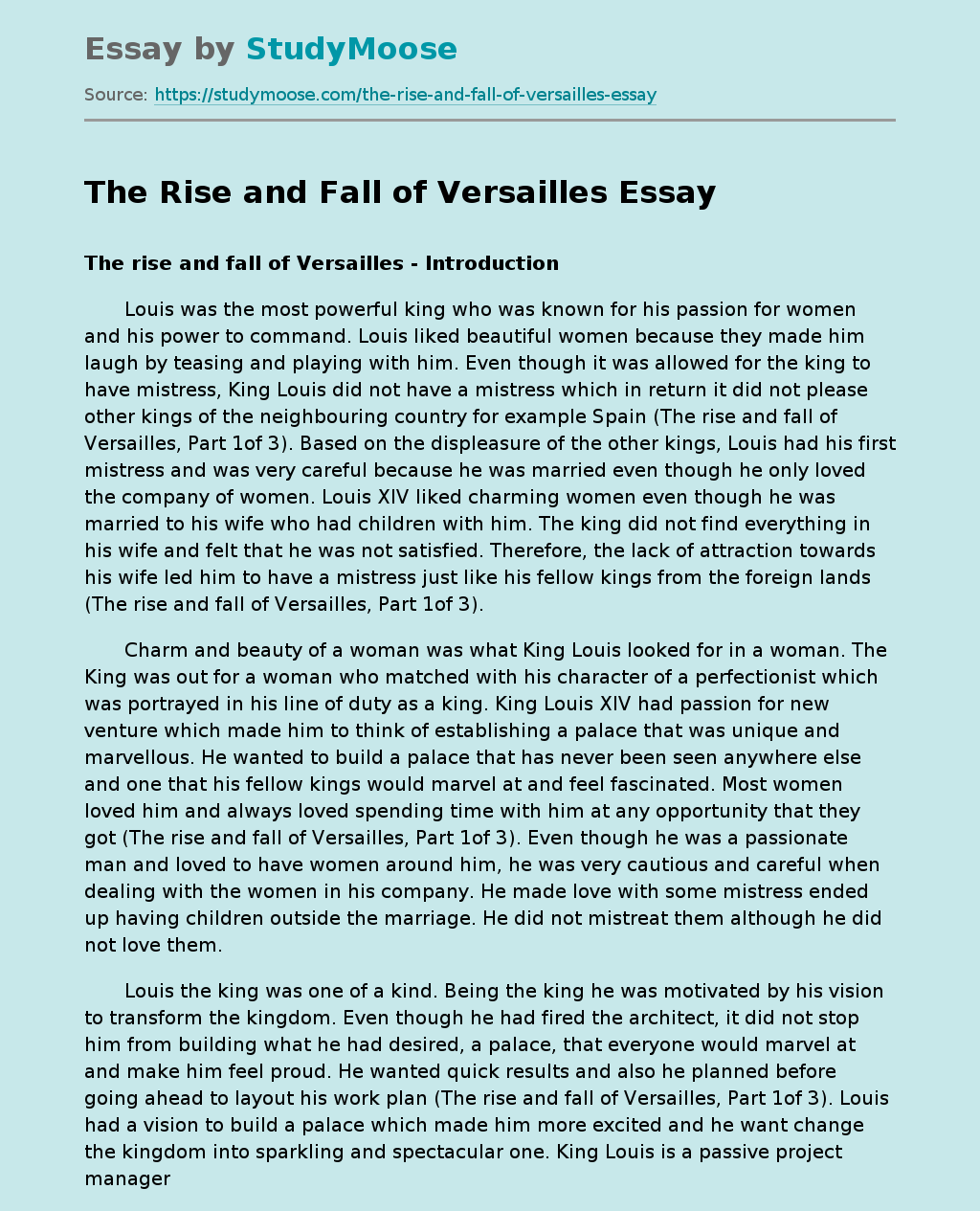